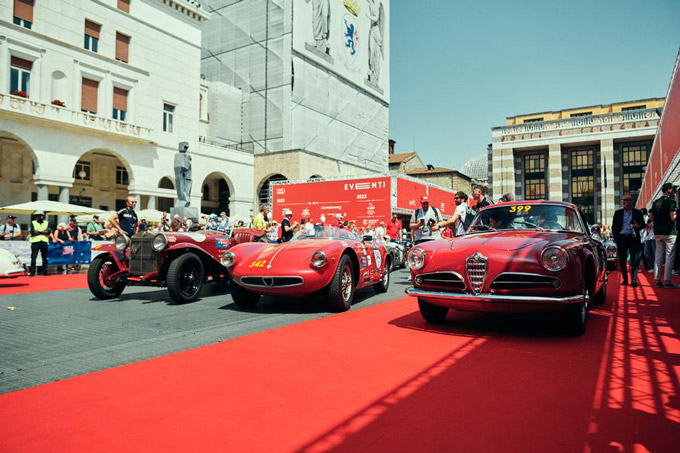 At 6.15 am on Sunday 19June 2022, the final stage of 2022’s 40th edition of the 1000 Miglia kicked off. This year's race ended with a reiteration of the long-standing links between Alfa Romeo and the renowned “Freccia Rossa”: the 1929 Alfa Romeo 6C 1750 SS Zagato took the top step of the Brescia podium, driven by a crew consisting of Andrea Vesco and Fabio Salvinelli from the Villa Trasqua team, also sponsors of the race.

The last few kilometers before a triumphal entry into Brescia

The final section, from Parma to Brescia, visited locations that resonate in Alfa Romeo’s past and present, including the Varano De’ Melegari racetrack and the Monza Circuit, the latter celebrating its centenary this year. The epic race passed through the regions where Italian passion for motorsport was born to return to Lombardy, the region where the most beautiful race in the world was planned and came to fruition. It ended with a triumphal entry into Brescia, including the traditional parade on Viale Venezia. Just like everywhere else along the route, the roads hosting the 1000 Miglia were transformed by the public’s generously warm welcome, from Brescia to Rome and back again, in every square and outside every front door: people spontaneously coming together, as happens year after year. All eyes were on the “traveling museum”, as well as a great deal of curiosity and plaudits for the Alfa Romeo Tonale. The new model has been supporting the race with its arrival in the past few days at all dealerships, where it can be discovered and appreciated by the entire “tribe” of the brand’s fans. The Alfa Romeo Tonale received an extraordinary welcome all along the route. No less extraordinary, this edition of the 1000 Miglia visited some of the most evocative locations in the Italian peninsula, ending with a classic win for Alfa Romeo.