Power performance by TGRSA at GTC Round 3 in Gqeberha 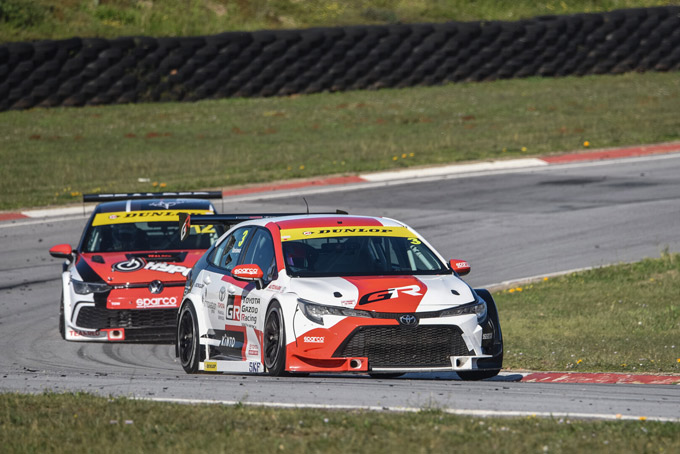 Round 3 of the 2022 Global Touring Cars (GTC) championship took place at the Aldo Scribante Racetrack near Gqeberha in the Eastern Cape this weekend, and TOYOTA GAZOO Racing SA produced several stunning results of the course of the race meeting.

The weekend started with TGRSA’s youngest squad member, Saood Variawa, setting the third-fastest time in qualifying. The qualifying pace was extremely fast, and all the GTC drivers finished within 1sec of each other. Robert Wolk, driving a privately entered Toyota Corolla GTC, set a time of 1min 1.810sec around the tricky circuit, with Variawa trailing him by just 0.281sec.

Mandla Mdakane posted the sixth-fastest time, 0.831sec behind Wolk, while Michael van Rooyen went eighth-fastest, 0.865sec behind the leader, after struggling to find a balance in the setup of his GTC Toyota Corolla.

Race 1 saw Variawa gain one position during the heat, moving up to second by the time the chequered flag was waved. He trailed Wolk by just 0.789sec at the finish, clearly showing his impressive pace. Van Rooyen came home in sixth place, just 0.599sec ahead of Mdakane in seventh.

The traditional reverse grid played into Van Rooyen’s hands, as the Rustenburg Rocket found some balance and pace, and managed to hold off a hard-charging Bradley Liebenberg (Volkswagen) for most of the race. Variawa, who had to make his way through the field due to the reverse grid, passed Liebenberg near the end of the race, affording Van Rooyen some breathing space.

In the end, Van Rooyen took the win, with Variawa in second, 0.929sec back. Mdakane finished in seventh place after a mid-race altercation that saw him leave the track, before fighting his way back into the pack.

The next event for the team will take place early in July, at the Red Star Raceway near Delmas in Mpumalanga.

TGRSA would like to extend our sympathy to the Volkswagen Motorsport Team, who was struck by tragedy when the truck transporting their race cars and equipment was involved in a fatal collision after the weekend's race. Our thoughts and prayers are with the families who lost loved-ones, and we wish our colleagues at Volkswagen Motorsport strength and courage in the midst of this tragedy.