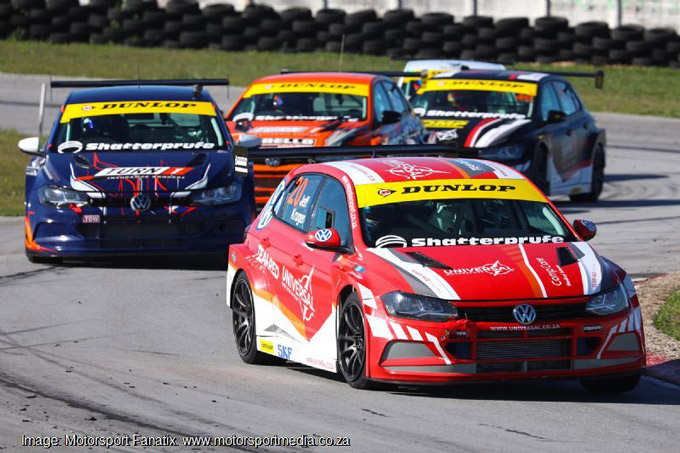 Gqeberha’s racing faithful turned up en masse to the Aldo Scribante racetrack, where they were treated to brilliant racing this past splendid sunny Saturday. The track action was supreme throughout the day, from the closest Global Touring Car races to the superfast Supercars, splendid Polo Cup heats, cracking ZX10 Masters and the rest. Local fans certainly lapped up every second of their annual fill of premier division South African National motor racing.

Van Rooyen’s reverse grid pole position paid off handsomely as he converted it into a hard-fought race 2 victory, despite Liebenberg hounding him throughout. But not before Variawa stole second for a Toyota 1-2 with Liebenberg third. Wolk pulled a last corner move on Rowe for fourth with VW teammate Jonathan Mogotsi sixth. So, 16-year-old Variawa took his second overall Global Touring Car win in two meetings from Wolk, Liebenberg, Rowe, van Rooyen, and Mogotsi.

Running behind them, the GTC SupaCup races likewise delivered thrilling action. Race 1 winner Jeff Kruger held on to take the day by all of one second, while brothers, Jason beat Keegan Campos to second by all of four thousandths of a second. Fourth placed overall, youngster Leyton Fourie and fellow rookie Arnold Neveling delivered their second reverse grid race 2 1-2 on the trot, while local hero Nick Davidson made it three Masters class wins in a row too.

The fastest, and some will say most spectacular action of the day saw Jonathan du Toit’s TAR Lamborghini Huracan pip Charl Arangies’ Stradale Audi R8 LMS to G+H Extreme Supercar pole position as both incredibly lapped Scribante in the 57 second bracket. A first race restart appeared to be going du Toit’s way, but Arangies soon made his move to take a lead he’d hold to the finish. Paolo Loureiro’s BMW was third from Greg Parton’s Lamborghini, and Kwanda Mokoena and Marius Jackson’s Audis.

Cape Town Bullion IT driver Jurie Swart consolidated his Compcare Volkswagen Polo Cup championship lead as he came from behind to take the first race victory. He then drove home third behind Lee Thompson’s Universal Polo and pole man Clinton Bezuidenhout’s Stu Davidson car in race 2 to take the day by the narrowest of margins. Thompson and Bezuidenhout tangled early on in the opening heat to allow Charl Visser up to second from Bezuidenhout, Tate Bishop, Dawie van der Merwe and Nathi Msimanga.

Lee Thompson then pulled pole position out of the top six hat, grabbed the lead and led race 2 from lights to flag from Bezuidenhout, Swart, van der Merwe and Visser. Behind them, turbo Polo rookie Giordano Lupini came from behind to steal sixth while his teammate Swart took the day by a tenth of a second, provisionally from Clinton Bezuidenhout, Thompson and Visser.

In single seater action, Alex Vos took his maiden Investchem Formula 1600 victory in race 1. He made a great getaway off pole position to grab a lead he’d hold throughout. Josh Le Roux piled on the pressure but had to settle for second from Gerard Geldenhuys, Troy Dolinschek and Nicholas van Weely. The second race proved a Le Roux benefit. He blasted off the line and drove away to win from Antwan Geldenhuys, Dolinschek, Vos and van Weely. Le Roux took the day from Vos and Dolinschek. Ian Schofield meanwhile took Formula Ford Kent honours from Allen Meyer, and Graham Hepburn.

*The weekend’s National Extreme Festival was rocked by tragedy when a Volkswagen Motorsport transporter was involved in a road accident while returning from Gqeberha on Sunday. The accident claimed the lives of two team members. On behalf of all involved in the series, the Extreme Festival extends its sincere condolences to the family and friends of the victims and to the Volkswagen Motorsport Family.