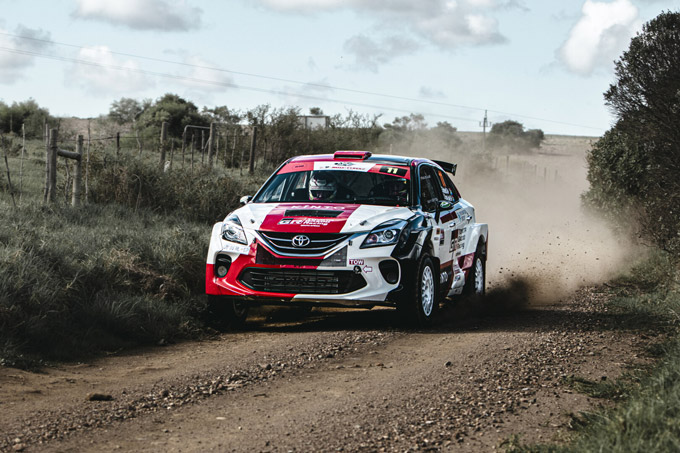 Guy Botterill and co-driver Simon Vacy-Lyle took part in this weekend’s Cape Overberg Rally, with the all-new Toyota Starlet rally car making its debut. The TOYOTA GAZOO Racing SA crew showed good pace throughout the event, but had their points-scoring efforts thwarted by teething issues with the new car.

“The new car was clearly very quick this weekend,” said Botterill after the event, which served as Round 1 and 2 of the 2022 championship. “However, a couple of niggles meant that we were unable to convert our pace into points at the opening round.”

The car was fully built and developed by the Durban-based team – a first for them. With limited time available for testing before the opening rally, Botterill and Vacy-Lyle were cautiously optimistic before the event, but were immediately quick once the rally started.

“We were second-fastest in the opening three stages on Friday, before upping the pace in stages four and five,” continued Botterill. “Unfortunately, an errant oil pressure sensor curtailed our progress during Stage 6, and we went tumbling down the order.”

The TGRSA crew were classified in 8th place at the end of the day. They started Round 2 of the championship on Saturday, but suffered a puncture on the opening stage. This saw them posting only the 5th-fastest time, trailing the leaders by 32.6sec.

“From there we pushed quite hard, and won the next three stages,” said Botterill. “This put us back in the lead of the rally, with a 14.9sec lead over Theuns (Joubert).”

Disaster came knocking in Stage 5, however, as a lower control arm broke on the Starlet, leaving the crew stuck in the stage. It was a disappointing end to an exciting weekend, though the crew remains upbeat about their season.

“Having some teething issues with the new car isn’t unexpected,” concluded Botterill. “Of course, we would have loved to bag our first podium with the new car, but we are confident that we’ll get the last niggles sorted before the next event.”

The next points-scoring opportunity is the Secunda Rally, which is scheduled for 10-11 June, in the area surrounding the Mpumalanga town of Secunda.