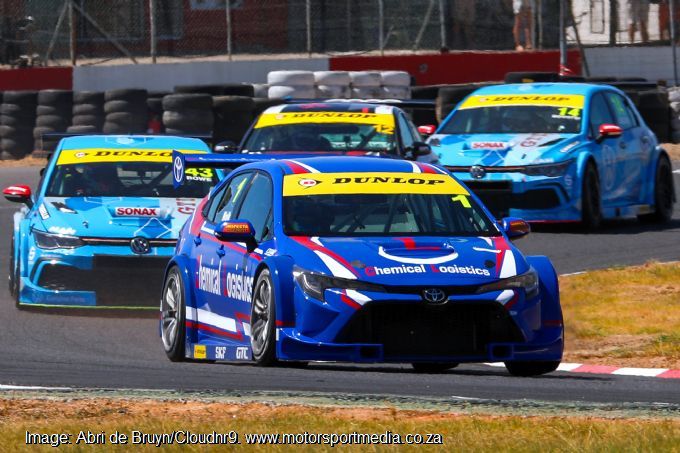 Chemical Logistics Racing heads to Gqeberha’s third round Global Touring Car weekend at Aldo Scribante's National Extreme Festival in a powerful position Saturday 28 May. Robert Wolk and Julian van der Watt have each won two of the four races run so far and both arrive in Port Elizabeth unbeaten this year. They go to the PE race favourites, in spite of some rivals’ home town advantage.

Reigning champion Robert Wolk has won both respective opening races at Killarney and Zwartkops so far in Chemical Logistics Toyota Corolla GTC and leads the title chase by a slender margin over teammate Julian van der Watt. “We have had a solid season so far on track with a couple of wins in the opening races,” Robbie confirmed. “We have also unfortunately been the subject of a few odd penalties, but we need to look ahead and carry our advantage into the Aldo Scribante weekend. I can’t wait!

Mr Reverse Grid, Julian van der Watt has meanwhile starred in the inverted grid second races and he has won both of them so far this season to sit a couple of points behind teammate Wolk in his Chemical Logistics Ford Focus RS GTC. "We have been very good in the reverse races and I’m delighted to have won both of them so far. “We have had great race pace, especially in the reverse grid races and our team has a 100 percent win record so far this year. Now let's continue that in the next round at Port Elizabeth!”

Third team member Andrew Rackstraw has quietly been getting on with business in his ageing Investchem RDSA Audi as the team readies his new car for later in the season. Reigning Investchem F1600 champion Rackstraw loves Aldo Scribante and is looking forward to the Gqeberha weekend. “It may have given us problems and my older spec car may be older and heavier, but none of that will stop me from giving my best at Aldo Scribante. “We are looking forward to a great weekend!”

Team manager and WCT Engineering boss Stuart Thompson is delighted with progress and can't wait for the Scribante weekend either. “We have won all four races so far this season, so we will be looking for a couple more in PE,” Stuart smiled. “The team is ready, our drivers are ready, let’s race!” Team principal Ian Schofield Concurred. “Two more race wins and to maintain our 100% winning would be a perfect result. “Whatever happens, all the best to the team at Aldo Scribante this weekend.”