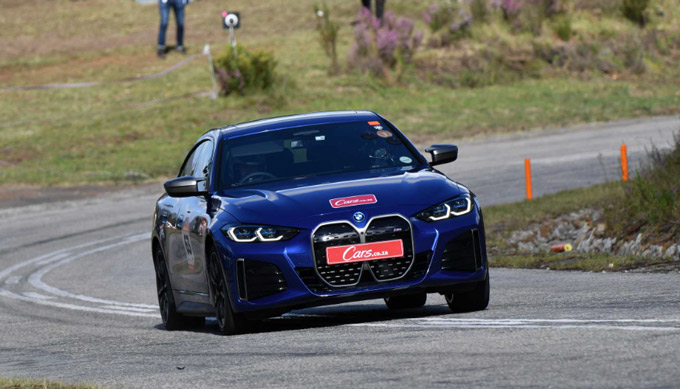 The all-new BMW i4 M50 revealed its performance-oriented stripes at the prestigious Simola Hillclimb, well ahead of its official introduction in South Africa, and with strong support from the other end of the scale of the BMW M family represented by the 375kW BMW M4 Competition.

The all-electric BMW i4, based on the BMW 4 Series Gran Coupe launched late in 2021 in South Africa, is the BMW brand’s first purely electric model focused squarely on driving dynamics from the outset. It is the first BMW M car with a locally emission-free drive system and impressed up the famous Simola hill with its impeccable starts off the line – courtesy of the standard xDrive all-wheel-drive system – and blistering acceleration provided by its 400kW/795Nm battery pack.

Competing in the Class A8 for hybrid and electric vehicles, and piloted by Cars.co.za journalist Ciro de Siena, the BMW i4 wound its way up the twisty 1,9-km course. Despite a wet track during Saturday’s morning practice sessions, and the first of three qualifying sessions in the afternoon, the i4’s time was progressively shaved off before dipping below the significant 50-second mark. The BMW i4 M50 set a time of 49.231 seconds in Sunday’s Top Ten Shootout in the Road and Supercar class to claim Simola Hillclimb’s electric vehicle record.

In a year when BMW M GmbH celebrates its 50th anniversary, it was especially fitting to have two BMW M-badged cars competing for a spot on the Simola Hillclimb podium, reinforcing the BMW Group stance to continue to provide “The Power of Choice” to customers, whether in internal combustion or pure electric form. The i4 M50’s debut showing on local soil was supported by the in-line six cylinder-powered BMW M4 Competition, driven by former touring car champion Deon Joubert. The BMW M4 put on a gutsy performance despite its more powerful company, before being disqualified from Class A4 for clipping a cone on his final run.

Deena Govender, Head of BMW Group South Africa’s Communications and External Affairs division, said: “The showing of the BMW i4 M50 and the BMW M4 Competition at Simola this past weekend highlights the incredible breadth of performance within BMW M in both electrified and internal combustion engine guises.

“Building on the success of the BMW iX, the i4 M50 showcases the next step in the expansion of the BMW Group’s electromobility offering in South Africa. While we were impressed with the car’s performance at Simola, we were most excited to see the impact it had on some of the country’s biggest motorsport fans assembled in Knysna on the weekend.”

For all the results from the weekend’s action at the Simola Hillclimb, please visit: https://www.speedfestival.co.za/