Who will win the SAGT turf war? 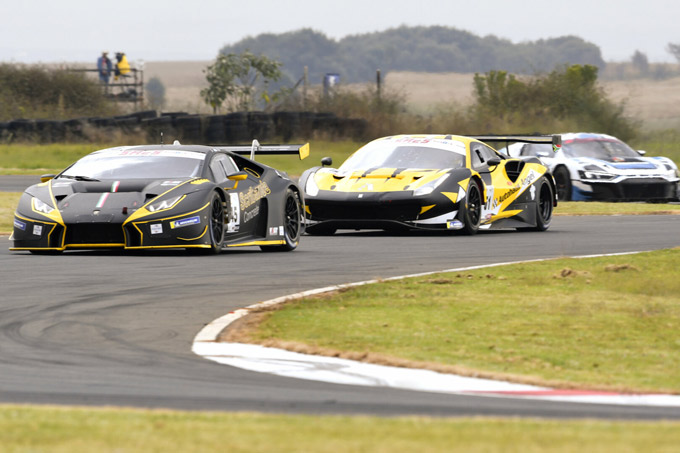 The SA GT National Championship has transformed into something of a Coastal vs Inland teams battle following the opening two rounds at Red Star last month, where the podiums were dominated by the seaside teams. The up-country crews are set to unleash their machinery in a bid to overturn the status quo at Aldo Scribante Racetrack in Gqeberha (Port Elizabeth) which hosts two one-hour races as rounds three and four of the 12-round championship.

Heading the title race is Capetonian Dayne Angel in his Autohaus Angel Ferrari 488 GT3 following a win and second place at the opening skirmish, leaving the youngster two points ahead at this early stage of the season.

Silvio Scribante powered his Cemza Cement Lamborghini Huracan GT3 to a win and third place last time out, beating brother Aldo who picked up a second and third place in his moody grey Scribante Concrete Lamborghini Huracan GT3. The sibling rivalry sees Silvio three points to the good over Aldo and with equal knowledge of the 2.48km race track, this battle is too close to call.

In yet another twist to the story, Daniel’s Grandfather Lionel raced for Aldo Scribante I, Celso’s Dad and Silvio and Aldo II’s Grandfather…

Michael Stephen, one of South Africa’s best known racing drivers, possibly knows his way around the track better than anyone racing today. He shared Aldo Scribante’s Lamborghini last time out – setting an all-time new Red Star Raceway lap record in the process - and shares second place on the points table; this time out he is sharing the Ultimate Outlaws McLaren MP4-12C with Izak Spies, the Chairman of Southern African Endurance Series.

Spies missed the opening rounds as he awaited spares which were held up in customs, and is raring to bag maximum points to kick-start his season.

One inland driver with ambitions to claim the SAGT championship is Charl Arangies, sharing his Stradale Audi R8 GT3 with young hotshot Arnold Neveling. Arangies is the reigning inter-provincial GT Champion and knows how to pedal a sportscar to its maximum design capabilities and must be regarded as a favourite to take a win or two.

Possibly the most exciting new entry is the rumbling 6.3 litre V8 engined-Mercedes-AMG GT3 entered by Bigfoot Express CEO Sun Moodley, well known for his drives in endurance racing. He hasn’t been behind the wheel for some time, and will be getting to grips with his new machine after racing Porsche’s for many years.

Marius Jackson will be out in his new MegaFibre Audi GT3. He gave his new car a shakedown at a recent regional race with impressive results and will be watched with interest as he gains around 17% more power racing at the coast.

Another exciting entry is 18-year-old Kwanda Mokoena in a GT4-spec Into Africa/Amandla Coal Audi R8. Mokoena is a protégé of the Africa Race Together foundation established by SAES shareholder Xolile Letlaka earlier this year. The ART foundation aims to promote diverse talent in motorsport, and Mokoena is a perfect example of the foundation at work, having honed his racing abilities in the VW Polo Cup series.

Mokoena debuted his Audi at Zwartkops last month and adapted well to his steep learning curve, driving sensibly to bring the car home and bank the experience and lessons learned ahead of his SAGT debut.

Rounding out the SAGT entry is Marcel Angel in his normally aspirated Autohaus Angel Ferrari 458 GT3. Angel Sr is no stranger to GT racing, competing on occasion at tracks around the country as his schedule has allowed.

Scribante, Angel or Stephen, Arangies or Jackson? Or someone else? Close SAGT racing is guaranteed.

SAGT is powered by Fast Racing Fuels and Michelin Tyres exclusively keeping the cars glued to the track. The races will be live-streamed courtesy of Toys-R-Us South Africa.