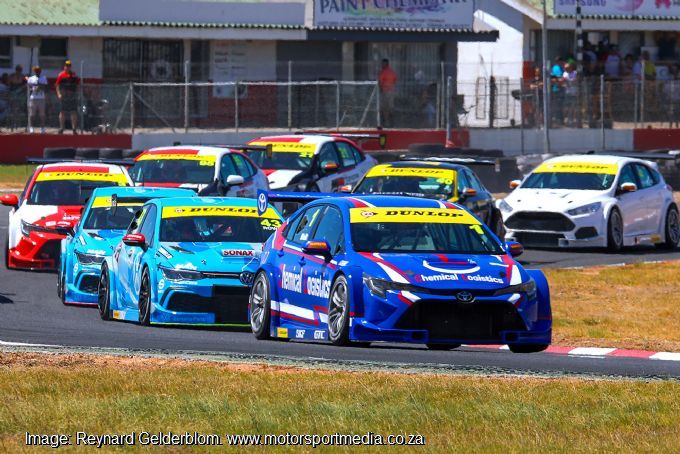 While the lads have enjoyed a little respite from their hectic schedule, Dunlop Racing is raring to go following a lull in the South African circuit racing season. With only one regional race at Zwartkops to keep them busy since the Cape Town National early in March, the team is looking forward to a consistent few months of flat out action, starting close to home at Zwartkops second round National Extreme Festival on 23 April.

Expect to see the Dunlop van in pride of place in the centre of the Zwartkops paddock that first open weekend in a couple of years since lockdown restrictions came into force. The lads will be as busy, and as colourful as little bees as they shoe most of the national paddock with their Dunlop Direzza slick and semi-slick racing tyres. The team fits, balances and prepares literally thousands of tyres through the weekend.

The real action starts Friday afternoon, when Compcare Polo Cup goes out to qualify, with the quickest of them winning the R2,500 Dunlop Pole Position Award. Same goes for the Global Touring Car and GTC Supacup pole men, who also each grab a R2,500 cash Dunlop Pole Position Award Saturday morning. Then the attention turns to the racing, with the overall winners in those three classes each earning a special Dunlop Trophy. All awards are of course presented to the applause of the lovely Dunlop Girls!

Dunlop is also the tyre of choice for both the Gauteng regional PABAR VW Challenge and Alert Engine Parts GTi Challenge in the Cape, as well as the upcountry Lotus Challenge and Car Care Clinic Superhatch series. That have all raced hard over the past three weeks. The PABAR VW Challenge proved spectacular at Zwartkops, where a record 43-Polos saw classes split into A and C racing together, and a 23 car B grid alone.

All of the above classes compete exclusively on Dunlop Direzza 15-inch Racing tyres, which ensure excellent stability, predictable grip and equal performance every race or session. Dunlop Direzzas feature a race tyre construction with a reduced tread depth and a high stability pattern along with a tread compound to ensure precise control, surefooted braking and predictable grip.

Now the Dunlop team is looking forward to the pizzazz and excitement of the first post-lockdown National Extreme Festival at Zwartkops on 23 April. Bring it on!