Will dusty Delmas serve up a fourth new winner in four races? 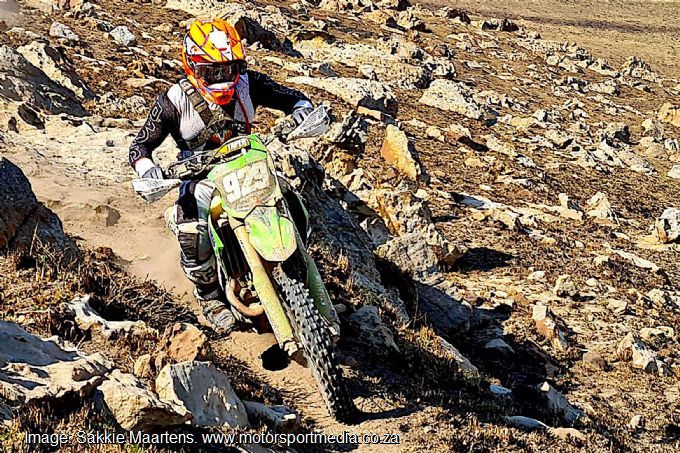 Three races into the 2021 MSA South African National Cross Country Motorcycle Championship, three different riders and three different machines have won the races overall. So the question has to be, will the virgin springtime mielie fields and dusty vleis of Delmas dish up another winner in round 4 on Saturday 11 September, or will we see our first repeat winner?

There’s much more at play. For instance, none of the reigning champions have yet won a round. And then there’s the ongoing Gauteng versus Natal battle to consider.

Pietermaritzburg international hero Travis Teasdale rode his TT Racing Gas Gas to wildcard victory in a muddy Jolivet, KwaZulu Natal season opener in February, before Gauteng OR2 rider Ian Rall restored upcountry honour when he blasted his MCA Dragon Energy Husqvarna to win the second round at Modimolle in Limpopo Province on Saturday. Then lockdown intervened before another KZN rider, Michael Pentecost threw a Franchise Co CIT Kawasaki cat among the pigeons to win ‘at home’ in Matatiele last month.

All three of those riders have scored somewhat unexpected victories in a championship that is seeing consistency, rather than outright results pay off. Overall and OR2 championship leader and reigning OR3 champion Bradley Cox has not yet won a round but leads the title chase on his Brother Leader Tread KTM with a couple of seconds and a third overall. SA Cross Country champion Brett Swanepoel sits second overall on his open class OR1 Rockstar Energy Husqvarna and he has also not taken a win this year.

So the odds are on a new winner. But then overall success has followed local riders and both these KZN men must endure the dust of Delmas rather than their favoured loamy Zululand hills. So this one may just be too hard to predict. Fourth overall and third man in OR1 is d’Artagnan Lobjoit itching to race in those conditions on his Pepson Plastics Motul Kawasaki. As will be Husqvarna OR3 lads Davin Cocker’s Rockstar Energy and Matthew Wilson's MCA machines. And motocross refugee Kerim Fitz-Gerald's OR2 Red Bull KTM.

But don’t ever ignore the Natal lot in any conditions. Swanepoel, Cox and Pentecost, as well as OR3 man Scott Heygate and his Alfie Cox KTM are always going to be in the picture. And then there’s the odd man out — Cape lad Jarryd Coetzee's and his big banger KTM, who is just as capable of causing an update. All of the above are well within the Cross Country Moto top ten and all are capable of winning in Delmas.

In the classes, it's Brett Swanepoel versus Michael Pentecost, d’Artagnan Lobjoit and Jarryd Coetzee, as well as Sherco man Hayden Louw. Bradley Cox has Kerim Fitz-Gerald on another Red Bull KTM and second round Ian Rall to deal with in OR2. There’s a significant scuffle in OR3 however, where Scott Heygate, Davin Cocker and Matthew Wilson will fight it out with Erik Merry’s Hudqvarna and Haydn Cole’s KTM, while Kyle Mackenzie will fly the Pepson Plastics Motul Kawasaki in Taki Bogiages’ absence.

Wade Blaauw will be looking to continue his Seniors domination with a fourth win in four races on his Roost KTM. But Deon du Toit will be out to break his bridesmaid’s streak there on his Franchise CIT Kawasaki, with KTM Durban lad Stuart Gregory and Shimwells Yamaha duo Dirk Olivier and Marco Cocci in pursuit. Greg Nairn's Perry Husqvarna, Miellies le Roux’s Alfie Cox KTM and Yamaha man Marius de Klerk will have Wayne Farmer's Bikers Warehouse Husqvarna to contend with in the over-40s Masters championship chase.

Watch for the Delmas dust storm on Saturday 11 September.