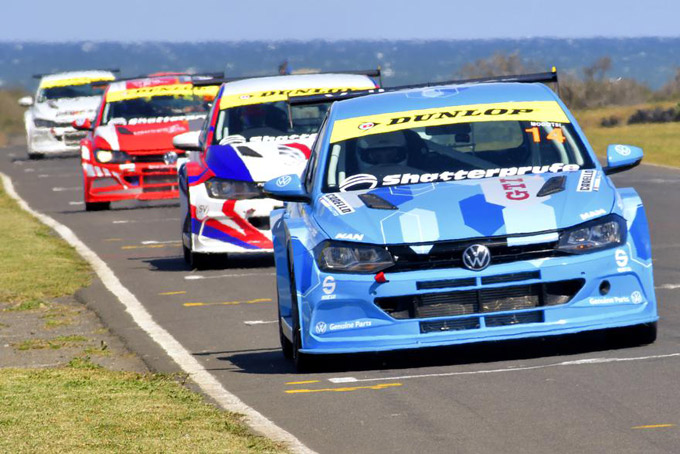 The fearsome East London Grand Prix circuit lived up to its reputation when it hosted the latest rounds of both the GTC SupaCup series and the even more competitive Volkswagen Polo Cup. The circuit is home to the two fastest corners in South African circuit racing and is known to separate the men from the boys. When the dust settled after an exciting weekend’s worth of racing, the standings at the top of the Polo Cup points table is now even closer than before while Volkswagen Motorsport’s Jonathan Mogotsi dis his title aspirations no harm with a fine second overall for the weekend in the SupaCup series.

“We are very blessed to have so much raw talent in this country and this weekend’s racing in East London just went a long way in proving that once again,” commented Mike Rowe, head of Volkswagen Motorsport. “The majority of the drivers in the Polo Cup are very young indeed with quite a few of them still in school. To add to the pressure, the majority of these drivers have never raced at East London before, but they all came through with flying colours. This weekend also proved what a great series the Volkswagen Polo Cup is and how big a role it plays in the unearthing and development of raw talent in this country.”

Speaking of raw talent. 15-year old Leyton Fourie came into this round as the championship points leader and had every intention to extend his lead, but Arnold Neveling and Capetonian Jurie Swart had other ideas. Swart has become a bit of a specialist at the coastal circuits after dominating the first race meeting in Cape Town earlier this year, so it was no surprise when his name topped the timesheets during practice and an eventful Superpole qualifying session which saw quite a bit of rain and a wet track. On Saturday, Swart managed to convert his pace into a race victory when his Polo crossed the line just a half a second ahead of Keegan Campos with Arnold Neveling just a further meter or so back. Fourie completed his first ever race at the East London circuit in fourth, followed by another 15-year old youngster in the form of Jayden Els.

This round of the championship was always going to be a crucial one for the title hopefuls as it featured three full races instead of the usual two. Swart was once again on the pace, but this time it was Arnold Neveling who took the checkered flag ahead of Swart and Els who claimed his first podium. With Fourie once again finishing fourth, it was Neveling who climbed to the top of the virtual points standings at this point in the weekend. But there was still one race left on the day, and what a turning point it turned out to be. Most of the race was run behind a safety car after a competitor’s Polo blocked the track at the exit of the Cocobana corner. When the race was resumed, the competitors only had two full laps left and this time it was Leyton Fourie who did some damage control by crossing the finish line first, ahead of Neveling, Clinton Bezuidenhout, Keegan Campos and Jayden Els. Drama was to follow as it was judged that Neveling had jumped the start and passed a competitor during the restart of the race. He quickly realized his mistake and gave the position back, but the rule had to be applied which earned him a 30 second penalty that dropped him down to the last position. Come the end of the season, it could prove to be a very costly mistake. When all the times were added to determine the overall winners, it was Jurie Swart who came out on top with Leyton Fourie claiming second ahead of Campos and Els.

“The Polo Cup definitely lived up to its reputation, but we are just as pleased with the developments of the GTC SupaCup series. We had a record number of entries for East London with more and more drivers joining at each race meeting. All indications are that we will have around 20 of these cars in the field before the end of the year,” Rowe added. This also means very close and competitive racing by some of the country’s best racing drivers. Two such drivers are no doubt Bradley Liebenberg and Jonathan Mogotsi who went to East London tied on championship points. Mogotsi worked hard during the practice sessions and improved his pace with each outing and was rewarded with a third and a second position respectively, enough for second overall on the day behind his rival Liebenberg who now edges ahead in the title fight. But it wasn’t only about these two as the series saw a new winner in the form of Jason Campos who not only won the first race, but also qualified in pole position, proving that the future for this category of racing is very bright indeed.

All eyes will be on this and the Polo Cup battles when the series moves to the Red Star Raceway in Delmas for the next round of the Extreme Festival on 24 and 25 September.