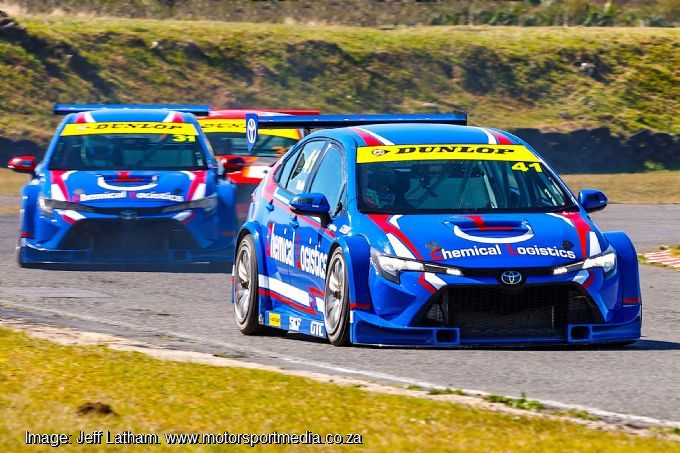 South Africans once again starred overseas as Toyota Corollas scored a GTC clean sweep in a Gazoo Toyota Racing Week 36 characterised by treacherous conditions that saw crucial races canned home and away. Among those affected were the Belgian Grand Prix, which tried its best to start, but failed in continuous Ardenne driving rain before half points were awarded to the grid top ten. It wasn't much better in Pietermaritzburg right here in KwaZulu Natal, where Thunder Valley lived up to its name to see the Cannabis TRP SA Motocross second heats scratched.

East London’s Extreme Festival races however found a hole in the adverse conditions that swept the country as Robert Wolk led Scott Temple and Michael van Rooyen home in a Toyota Corolla GTC 1-2-3. Van Rooyen’s Gazoo Racing machine took race 1 from Wolk and Temple, but he was penalised two places from third for a second race clash with Julian van der Watt's Autozone Focus. So Wolk and Temple ended up second and third in both races after Lee Thompson took a lights to flag reverse grid second race win in his Universal BMW.

Looking overseas, South African stars once again flew the flag with pride. Jordan Pepper and Andrea Caldarelli took the opening Road America GT World Challenge America race victory in their K-PAX Racing Lamborghini Huracan. And at Silverstone, SA's ‘Sunday’ Binder Brothers, Brad rose from 12th to sixth KTM in the British Moto GP, while Darryn climbed from 6th to 7th on his Honda after fighting for a podium finish for most of the race.

Other South Africans to shine overseas through the weekend included Aqil Alibhai, who delivered another best result yet in the British Ginetta Junior Championship. He raced to sixth in race 1 and second among the rookies and 12th in race 2. And 14th in race 3 to jump three places up in both championship chases. And lady racer Jessica Howden ended seventh on her European Woman's Cup debut at Mugello in Italy.