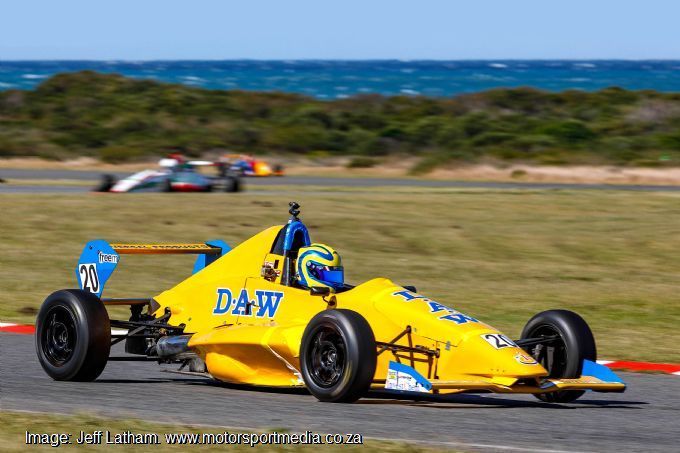 Teenage prodigy Jarrod Waberski has finally stopped Andrew Rackstraw’s dominant run in the 2021 Investchem South African Formula 1600 championship. The Gauteng youngster took the first East London Grand Prix Circuit race of the day on Saturday. Cape lad Rackstraw bounced back to take the second race of the day, but that was not enough to stop Jarrod from taking the overall Border Extreme Festival victory.

The results were of historic significance on several levels. Waberski’s victory was the first for a single seater in his family’s famous yellow DAW colours since dad Garth won in Formula GTi 30 years ago in 1992. DAW Racing won several South African championships over the years with the likes of Bernard Tilanus, Trevor van Rooyen and Braam Smith and Garth at the wheel in Formula Atlantic and GTi in the 1980s and ‘90s,

Waberski however got the jump and while Rackstraw fought back, he found himself on the outside into the Copabana hairpin at the end of the long straight. Andrew was further compromised when Jarryd locked up momentarily and Rackstraw ran wide. His plight was further compromised when he had to avoid the gyrating Holtzhausen as he attempted to rejoin and found himself at the back.

Sadly le Roux’s qualifying pace came to nothing as the race essentially ended before it started with a radiator issue, leaving Jarrod Waberski in the lead from Andrew Schofield, who had moved up to second behind Waberski amid much opening lap jockeying for position. But Schofield also stopped a lap later with a misfire, leaving Waberski comfortably ahead of Antwan Geldenhuys, Vos, Gerard Geldenhuys, van Weely, Holtzhausen, Tracey and Rackstraw.

Rackstraw appeared to be struggling with a power issue on the RDSA car, but it seemed to clear and he duly took care of Tracey and Holtzhausen. He then came within half a second of Jack Brabham's old F1 lap record as he closed down on van Weely in fifth, but ran out of laps. Through all of this, young Jarrod Waberski scored a memorable maiden victory to put his classic yellow DAW colours back on top of the podium 30 years later.

Behind Waberski, a delighted Antwan Geldenhuys also took his best-ever finish in second ahead of Alex Vos, Gerard Geldenhuys, Nicholas van Weely, the recovered Rackstraw, Holtzhausen and Tracey. Rackstraw was once again on pole for race 2, but the second grid slot was empty as top rookie Josh le Roux failed to make the start, unable to repair his car in time. Rackstraw duly made off ahead of Waberski and Vos.

It was wild behind them as Schofield, the Geldenhuys brothers, Holtzhausen and van Weely diced hard, but van Weely spun and Schofield pitted. By the time it had all shaken out, Antwan emerged in fourth ahead of Gerard Geldenhuys with Holtzhausen and Tracey, Schofield and van Weely in pursuit, before Tracey stopped. Andrew Rackstraw had meanwhile made off up front with Jarrod Waberski keeping him honest enough ahead of Vos.

The championship remained static up front. Waberski indeed pruned his title deficit to Rackstraw back from 25 to 22 points, thanks to Andrew offsetting some of his first race losses with his historic pole position and fastest lap of the day bonus points, subject to MSA confirmation, with van Weely now a distant third.

Investchem Formula 1600 returns to the Extreme Festival’s appointment at the Red Star Raceway near Delmas in Mpumalanga Saturday 25 September.