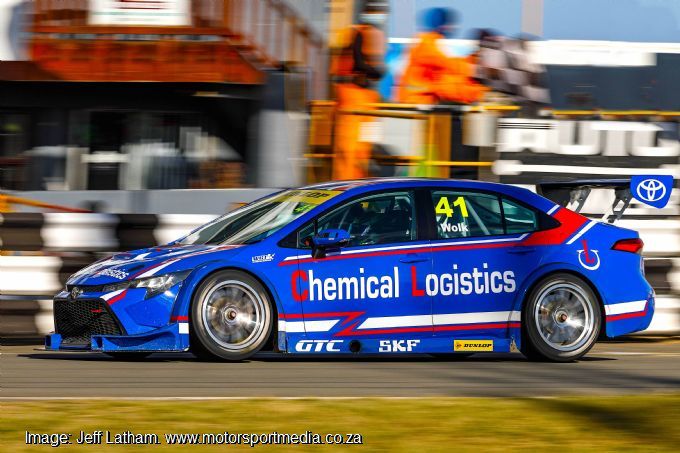 Van der Watt’s second race woes however inadvertently proved fortuitous for his Chemical Logistics Corolla teammates, when van Rooyen was slapped with a three-place penalty for his part in the Autozone Focus’ demise. That promoted Temple to third in race 2 and Wolk to the overall win ahead of Temple and van Rooyen. Wolk’s double second places also played a part in slightly provisionally extending his Global Touring Car Championship lead over van Rooyen by one to eight points.

“Today was a bit of a tortoise and hare kind of a day!” Robert Wolk admitted. “Michael had us trumped on pace all weekend, but somehow we head home with a 1-2, the winner’s trophy and an extra point’s championship lead! “We were fair and square beaten in qualifying and in the first race, but I was over the moon to keep Michael behind in the second heat. “Then he was slapped a three place penalty for bumping Julian and we were handed the win! “I’ll take that!”

“East London was my best race of the year,” Scott Temple explained. “Two strong third places and second overall, and best of all, we had a clean day for once and that makes such a huge difference. That also means that I am now up to third in the championship chase and our Chemical Logistics Toyota Corollas are now first and third in a Toyota GTC 1-2-3. “Thanks to the team for a great car — now I can't wait to get to Red Star!”

“Today was fifty-fifty for us,” Julian van der Watt rued. “I gave it my all in the first heat and we were satisfied with fourth in the Autozone Focus GTC and I was excited to be in a strong position for the reverse grid race. “Unfortunately I took a knock from Michael, which ultimately caused me to stop. “There was a silver lining though — he was penalised for that, which handed the advantage to our team. “Now we dust off and head to Red Star to make up for lost ground — bring it on.”

“Sometimes this sport has a habit of rewarding you in the strangest of ways," team manager Stuart Thompson pondered. “We never quite had the pace today but we go home with a 1-2 and an extended championship lead. “Still, the WCT Engineering team has some work to do to win back that touch of pace we seemed to miss in East London. “Rest assured we will be giving it our all to protect that championship advantage.”

“Congratulations to our entire team on a brilliant result today,” Investchem Racing team boss Ian Schofield concluded. “All three drivers gave it their all and the whole team starred. “We will take this one with both hands and head home with a spring in our step to prepare come back even better for the next round — let's do it.”  Global Touring Cars heads to Red Star near Delmas, Mphumalanga next for the 25 September Extreme Festival.