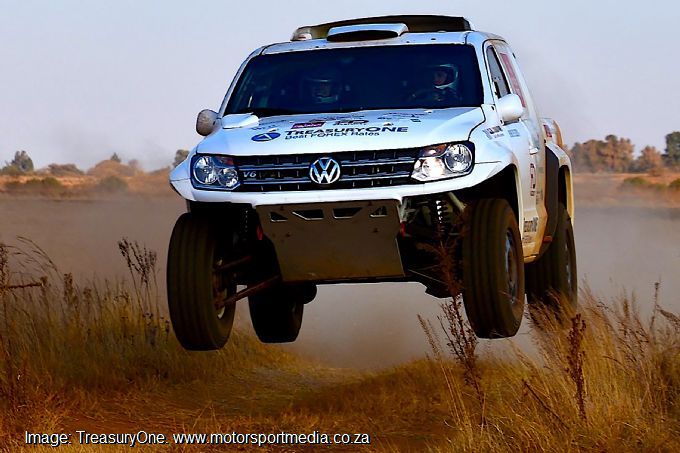 TreasuryOne Motorsport is locked and loaded for the Kalahari and the biggest test of its Dakar 2022 preparations. Rookie winner in 2018, Pretoria businessman Hennie de Klerk has quietly set about his attempt to make it three finishes out of three Dakar attempts alongside navigator Adriaan Roets in the TreasuryOne Amarok, but the 3800 km six-day 4-10 September Kalahari Rally is the final and most important facet of their build-up to January’s Arabian Desert epic.

“The Kalahari Rally is the perfect final step in our preparations for Dakar 2022,” Hennie de Klerk pointed out. “It's the only off-road race where we race for a whole week over such a long distance, living out of a bivouac and having to plan to perform best we can each day, while saying focussed on the big prize of finishing."It’s a mini Dakar with all the correct navigation, terrain and all the aspects we will need to master in Saudi Arabia in January. “Best of all it's right on our doorstep.”

The TreasuryOne team has run a comprehensive program as it prepares for Dakar 2022. It started with a few regional off-road races in the Treasury One Amarok V8, Hennie and Adriaan then switched across to the team's BMW X3 while the Amarok was stripped down and rebuilt from the ground up at the Prep Shop. A thorough dune training session followed over a week late in July.

Now the team is set for its attack on the Kalahari Rally before starting with final Dakar preparation before setting sail for Saudi Arabia. “The Kalahari Rally starts with documentation and Scruitineering on Friday 3 September before a 117 kilometre Super Spoecial qualifier on Saturday. Sunday is the first real stage over 639 km from Digtebos to Vryburg before a monster 864 km to Heuningbos.

“Tuesday sees a ‘short’ 427 km run to Kleine Meer, then its 549 km to Goerapan and then here’s a sting in the tail with an 856 km haul to Vanzylsrie and then Friday’s 224 km final stage to Skilpadshek.

“As you can see, the Kalahari Rally is much like one of the weeks of the Dakar, so it’s the perfect way to prepare. "We ended up second in this race last time it happened in 2019, so secretly I’d like to go one better. ‘But our real focus next week is to hone in our final preparation for the Dakar. “Let’s do it!”