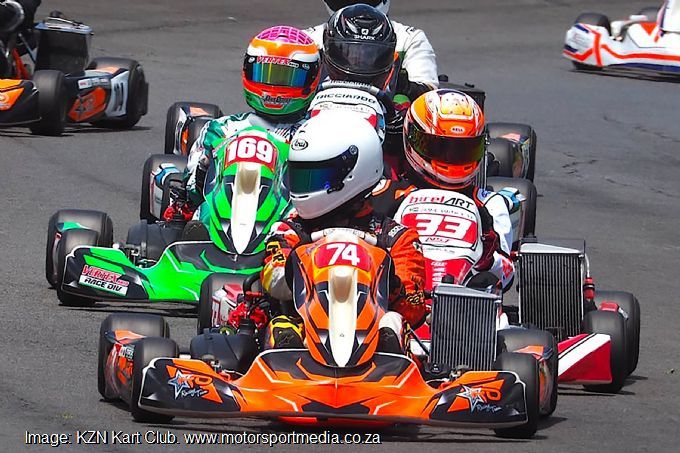 The South African National Rotax Max Karting Challenge racing with WOMZA is ready for its long awaited third round as SA’s finest descend on iDube in KwaZulu Natal Saturday 4 September. The race postponed from June due to lockdown, will see competitors from around the country rejoining the chase. Not just for those illustrious national titles, but also for the chance to represent South Africa at the ‘Olympics of Karting’ Rotax Max Grand Finals in Bahrain in December 2021.

All of which means the action will be extreme at the tight and challenging undulating track near Camperdown, not least of all in the premier gearbox class direct drive DD2s. It’s all about a Cape Town battle up front, with national leader and reigning champion Sebastian Boyd set to resume battle with Joseph Oelz and Jason Coetzee. Never ignore local men Robert Whiting and Jonathan Pieterse who have local honour to defend in DD2.

They have already shown as much against Gauteng visitors Brandon and Jamie Smith and Nicolas Spanoyannis in pre-national regional rounds of late. Local star Pieterse will also be the men to beat in over-32 DD2 Masters. His rivals include PE superstar Michael Stephen, Gauteng men Nicholas Verheul and Eugene Brittz. And the Cape lot including Conor Hughes, Andrew Thomas and Jared Jordan, plus local evergreens including Alistair Mingay.

Top chain drive Senior Max is another class where Cape drivers are in the ascendance. SA champion and Polo Cup racer Tate Bishop will have support from WP compatriots F1600 leader Andrew Rackstraw and Storm Lanfear. But local heroes Riley Horner and Jack Rowe have proven they can deal with the best on that hallowed home ground and then there’s the matter of the Jozi lot, not least of all Kian Grottis and Olerato Sekudu.

There’s one class where regional ascendance does not play a role and that’s under-15 high school Junior Max. The battle there should be between the Gauteng gang led by Muhammad Wally with Jayden Goosen in support, while Reza Levy and Matthew Wadeley will fly the Cape flag. But the man to beat has to be ‘Martizburg local Troy Snyman, who has always proven a hard nut to crack at iDube.

Under-13 Micro Max is another melting pot with drivers converging on iDube from all around the country. Wian Boshoff and Erich Heystek will make the trip from Jozi, Joaquin de Oliveira and Sabelo Ntuli travel in from the Cape and Caleb Odendaal from East London. But they will all find more than just home honour to beat in KwaZulu Natal, where Travis Mingay and Dylan Watkins will put their best home track knowledge to use.

Next up is under-11 Micro Max, where the upcountry attack will come from Spice Mailula, Mattao Mason, Cristian Verheul and Rafael da Silva. Brothers Keagan and Aiden Beaumont and Dale Hobbs will be among the Western Cape party and Jack Moore and Caleb Moss make the trip from the Eastern Province. They must all first however beat KZN locals Harry Rowe and Kyle Spies.

And then there are the baby Bambinos, where the fight will be between Matthew Shuttleworth, Santi Frade and Maddox Mason from the Highveld, Siyabonga Ntuli, Michael Danks and Liam Wharton from the Cape and local KZN lads Troy Pieterse and Kayden Pistauer.

The KZN races are the first of two South African National Championship Rotax WOMZA karting rounds, this Saturday 4 September. The fourth and final round follows in a special double header at Pretoria’s Zwartkops International Raceway a month later comprising the National Final on Saturday and the continental Rotax Max African Open on Sunday 3 October.

Spectators remain banned from sporting events. You can however follow the iDube’s third round Rotax Max Nationals live via streaming on www.kart.co.za or through YouTube on your smart TV.