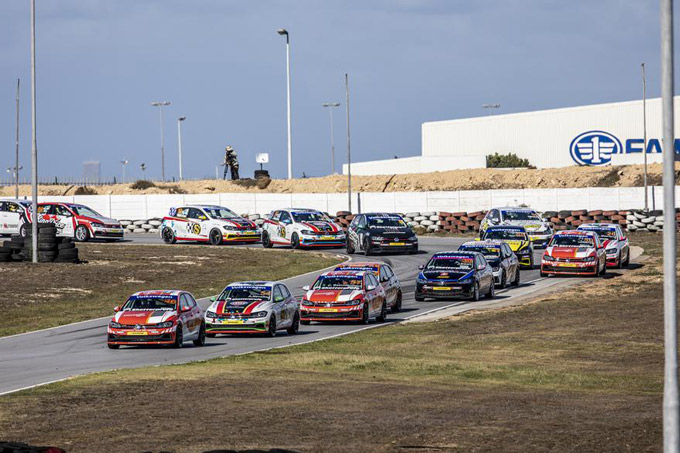 South Africa’s top drivers are chomping at the bit to go racing after a break of nearly three months. And where better to resume the various championship battles than the historic Grand Prix circuit in the city of East London? In the form of Potter’s Pass and Rifle bend, the circuit boasts with two of the fastest corners in South African motorsport that are renowned for sorting the men from the boys.

“We are very excited to finally resume the 2021 racing season, and we can’t think of a better backdrop than the famed circuit in East London,” commented Mike Rowe, head of Volkswagen Motorsport. “It’s been nearly three months since we last saw racing, so I’m sure that all the competitors in both the highly competitive Polo Cup as well as the very popular SupaCup series can’t wait to resume their respective championship battles.”

The battle at the top of the Polo Cup championship points table has been the one to watch, and is set to continue this coming weekend. The three previous rounds were earmarked by exceptionally good and clean racing between youngster Leyton Fourie and Arnold Neveling with Fourie currently topping the points ladder with a tally of 123 points, courtesy of two race wins and a few bonus points for setting the fastest lap on three occasions. Neveling, who also tasted victory twice has amassed 120 points so far and with 20 points available for each win, one can be assured that these two will throw all caution to the wind this coming Saturday. And they won’t be the only ones gunning for glory. Capetonian Jurie Swart, currently on 110 points is well within striking distance, and so is Clynton Bezuidenhout, just a further 5 points adrift.

“There is no doubt that this weekend’s racing will play a massive role in the final outcome of the championship,” added Rowe. “These drivers have all to play for and the format on Saturday will see three races instead of the usual two. With that many points on offer, Saturday’s winner will take a big step towards earning one of the most coveted titles in motorsport.”

The standings in the very competitive SupaCup category of the Global Touring Cars series (GTC) are even closer, as there are no points separating defending champion Bradley Liebenberg and Volkswagen Motorsport’s Jonathan Mogotsi at the top of the points table. Liebenberg has stood on the top step of the podium on three occasions so far in 2021, but a non-finish three months ago at the Aldo Scribante circuit in Gqeberha saw him lose valuable points. Mogotsi on the other hand claimed his maiden victory in the same race, meaning that the duo are now tied on 95 points apiece. And they won’t have it their own way either as Jeffrey Kruger and youngster Saood Variawa will have every intention to join the battle. These two are currently sitting on 79 and 76 points respectively with Jason Campos also still within striking distance.

“To see a full field of SupaCup Polos going flat out through Potter’s Pass and Rifle will be quite a sight. It’s a pity that there won’t be any official spectators due to the pandemic, but fans across the country can follow all of the action on our various social media platforms,” concluded Rowe.