20 years of Cross Country Special Vehicle Champions – who will be next? 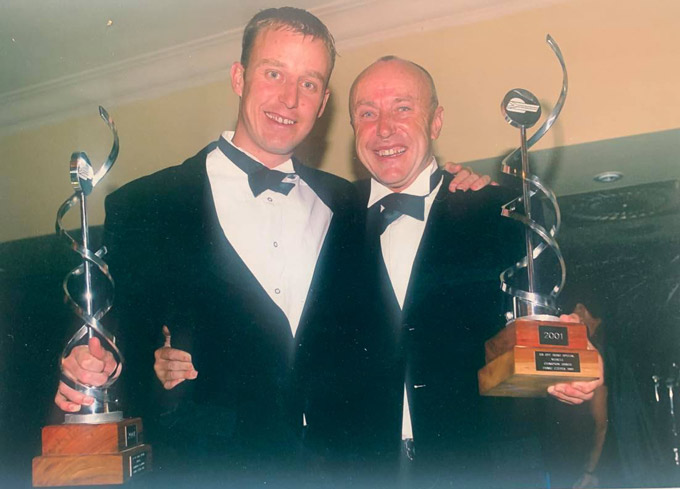 The Special Vehicle Category of the South African National Cross Country Series (SACCS) has always formed a special part of the series and the performance of the ‘open wheel’ vehicles with their roaring engines and big wheels, has entertained the crowds for decades.

The first South African National Champions in the Cross Country series were awarded their titles in 1978 and in 1989 the series was split into the Special Vehicle Category and the Production Vehicle Category with a few more categories also in the mix in the early 1990’s.

The 2021 SACCS has reached the halfway mark of the season with three more events to go before the new champions will be crowned. In the Special Vehicle Category, the 2019 champions, Lance Trethewey and Adriaan Roets have taken a commanding lead after winning all three of the first events with their Schalk Burger Motorsport BAT Venom and a second title is within their reach.

In 2000 Shameer Variawa partnered by veteran cross country specialist, Buks Carolin in the navigator seat took the overall title in a Raceco. While it was Variawa’s first and only title to date, it was Carolin’s fifth national title as he had claimed the Overall Special Vehicle Drivers’ Championship previously in 1989, 1990 and 1991 as well as the Overall Special Vehicle Navigators’ title in 1994 and went on to round off his list of six titles with another as navigator in 2004 next to Atang Makgekgenene in his Jimco. With a total of six overall titles as both a driver and navigator, Carolin is currently the only competitor to date to have accomplished this.

In 2001, the Czepek father and son pairing of Franz Snr and Franz Jnr proved once again why they were so successful during the 1990’s when they took their fifth title in their Raceco and added to their list of four (1994, 1996, 1997 and 1999). The 2002 title went to Greg Harvey and Boy Stone (Jimco). This was Harvey’s third Overall Driver’s Championship title (he also won it in 1995 and 1998) while it was Stone’s second as he was also the champion navigator in 1998 alongside Harvey.

The 2003 Overall Driver’s Championship went to Giel Nel when he won the title after a consistent season without a navigator in his single-seater Truggy. Brandon Harcus, the son of the legendary off-road racer, Arthur Harcus, won the Overall Navigators’ Championship after a season where he and Gary Bertholdt shared the driving duties in their locally-manufactured BAT.

In 2005 Terence Marsh and his brother-in-law, Michael Whitehouse, won the overall title in their BAT after a season that saw six different winners, including the newly crowned champions. The following year, a little history was made when Alfie Cox, who won the Overall Production Vehicle Drivers’ Championship the previous year, claimed the Overall Special Vehicle Drivers’ Championship title together with navigator Hennie ter Stege and added that to his list of more than 20 off-road and enduro motorcycle championship titles. Cox’s record of titles across the board will not easily be matched.

For the period, from 2007 to 2016, only two surnames appeared on the list of competitors to have won the Overall Special Vehicle Drivers’ Championship – Hutchison and Sullwald. Evan Hutchison took the championship by storm and claimed the title six times in a BAT making him the most successful driver in this category. He won in 2007 and 2009 with navigator, Achim Bergmann and did so again in 2012, 2013, 2015 and 2016 with Danie Stassen reading the notes.

The Sullwald brothers, Karl-Heinz and Herman, had been involved in cross country racing since the 1990’s and after taking a break for a few years returned to the sport, this time with their sons, Quintin, who is Karl-Heinz’s son and Wichard the late Herman’s son.

In 2008 and 2010 Karl-Heinz and Quintin claimed the titles with their BAT and in 2011 it was the turn of Herman and Wichard. In 2014 Quintin got his chance behind the wheel with dad Karl-Heinz reading the notes.

The final race of the 2017 season was a nerve-wracking one with Hutchison/Stassen missing out on a hat-trick of titles with the Fourie couple, Marius and Jolinda (BAT) walking away as the overall champions. The following season saw yet another lady being crowned as the Overall Special Vehicle Navigator’s Champion when Sandra Labuscagne-Jonck and her dad, Coetzee Labuschagne, overcame a roller-coaster ride to take the title.

Fourie and Labuscagne-Jonck were the third and fourth lady navigators to have won overall championships with Dagmar Blankner winning in the Production Vehicle Category in 1990 and Edith Beaurain in 1993 in the Special Vehicle Category.

Reigning champions, Tim Howes and Gary Campbell completed their first full season of National Championship racing together in 2020, with Howes currently second in the Drivers’ championship 39 points behind the leader Trethewey. Campbell who missed the first two events of the season is way down the leader-board.

The second half of the 2021 SACCS season resumes on 1 and 2 October with the 4x4 Mega World  400, the fourth and fifth rounds of the championship that will take place in the Bothaville area in the Free State. This race will be followed by the Vryburg 400, the penultimate round, on 29 and 30 October in the Northern West Province and the Parys 400 on 20 November the sixth and final round of yet another exciting season.