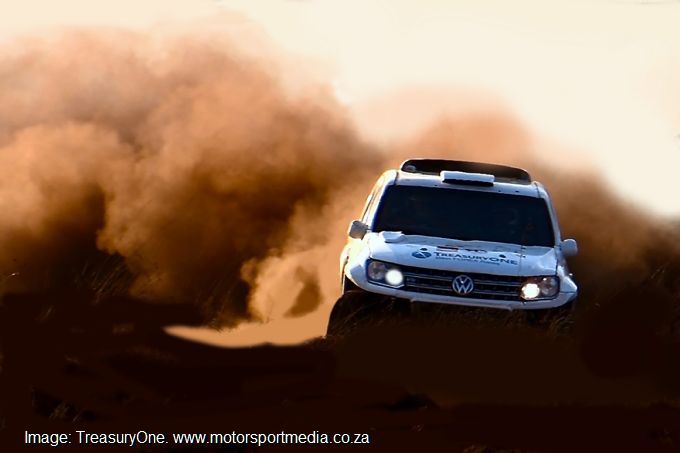 TreasuryOne Motorsport’s Dakar 2022 plans continue on course after Hennie de Klerk and navigator Adriaan Roets competed a successful, if testing week of Namib dune training aboard the team’s completely re-fettled V8 Amarok last week. The duo pressed the race truck straight into flat out action off its shakedown, fresh from its nut and bolt restoration. De Klerk is bidding to make it three finishes out of three starts in the gruelling race.

“We had a fantastic week of Namibian dune testing in preparation for the Dakar in Saudi Arabia in January,” Dakar 2018 Rookie winner Hennie confirmed. “It was a long week of training in a thousand kilometre desert adventure that has played a massive role in our Dakar 2022 preparations. “We once again learned so much, the car quite literally came through with flying colours and Adriaan did a brilliant job in the hot seat.

“The dunes were very tricky with the east wind blowing when we started with three days on the bigger, more predictable terrain of Meob. “Those are the biggest dunes that you will ever see! “We then moved over to the more challenging sands around Dune Seven. “They are more like the smaller dunes and holes we expect to find when the Dakar enters the Saudi Desert’s mysterious and sandy Empty Quarter for the first time in January.

“We worked on suspension changes as well as different tyre pressures all the way from 0.8 to 1.6 bar to suit our new Goodyears and they performed very well. “We did have a few challenges,” Hennie smiled. “Our solid first day in the dunes was interrupted by a bit of a moment when the TreasuryOne Amarok fell over because we went too soft on the pressures and the car sustained a bit of cosmetic damage!

“Happily all was well with the rest of the TreasuryOne Amarok, which feels like new since its complete rebuild. "Tjaart and the Prep Shop did a splendid job, our upgrades are working and it’s really getting exciting now! “Adriaan and I also did some great basic navigational exercises thanks to  local dune guide Werner Scaap from Opposite Lock in Swakopmund, who set an incredible  training route for us.

Navigator Roets is meanwhile counting sleeps down to that January 1 Dakar start. "Hennie is a superb driver," Adriaan explained. “He reads the dunes very well, so I am really looking forward to the Dakar alongside him — this is really going to be a good one! “We’d like to also thank every last member of the TreasuryOne Motorsport team for all their assistance, contribution and commitment to our dream."

The TreasuryOne team’s preparations become competitive again as Hennie and Adriaan now prepare to tackle the 3600km 6-day Kalahari Rally early in September. “That’s all about improving our navigation on compass bearing skills to find the way points on a great route across Kalahari dunes, just like on the Dakar,” Hennie concluded.

The team then starts final preparations in anticipation for the Amarok and all the equipment being shipped to Jeddah early in the fourth quarter. The team then jets in just after Christmas to set up for Dakar 2022’s New Year’s day start.