It's an intense, if short and sweet Toyota Gazoo Racing Week 29 on Auto! 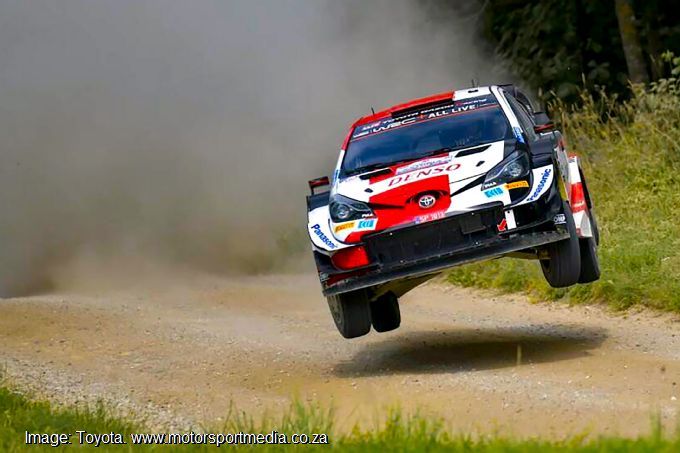 With no local motorsport to speak of as lockdown continues to pause the SA race season, it was up to live action from abroad to keep local fans happy over the past Gazoo Toyota Race Week 29. It was another great world motorsport weekend for Toyota Gazoo Racing, but the biggest news was at Silverstone where a simmering Formula 1 rivalry boiled over on Sunday afternoon.

ROVANPERA IS YOUNGEST EVER WRC WINNER

In perhaps the most impressive performance of the weekend, Toyota Gazoo Racing youngster Kalle Rovanpera became the youngest ever World Rally Championship winner with a dominant display at Rally Estonia over the weekend. The 20-year-old son of former WRC winner Harri snatched the youngest winner honour from his Toyota team boss Jari-Matti Latvala, who won in Sweden at 22 years old in 2008.

Rovanpera beat Craig Breen by a minute with his Hyundai teammate Thierry Neuville third from Toyota men Sebastien Ogier and Elfyn Evans. Ogier still leads the World Rally Championship on 148 points from Gazoo Toyota teammate Evans’ 111, with Thierry Neuville next up and young Rovanpera in a Hyundai sandwich ahead of Ott Tanak. Tatsumi Katsuda sits sixth making it four Toyotas in the WRC top six. Toyota is yet to be beaten in the 2021 WRC.

It was a little trickier for Toyota Gazoo Racing at the first-ever World Endurance Championship 6 Hours of Monza. Mike Conway, Kamui Kobayashi and Jose Maria Lopez number 7 Toyota GR010 Hybrid led most of the way, but there was drama at the beginning of the penultimate hour when Kobayashi stopped to allow Romain Dumas’ Glickenhaus 007 LMH to take the lead.

GAZOO TOYOTA FIGHTS BACK AT MONZA

The Glickenhaus however had to stop for a brake service to hand the Toyota a reprieve as Conway made a late splash and dash fuel stop in his efforts to keep the combative Andre Negrao, Nicolas Lapierre and Matthieu Vaxiviere’s Alpine A480 at bay and maintain another unbeaten 2021 Gazoo Racing record. LMP2 winners Philip Hanson, Fabio Scherer and Filipe Albuquerque’s Oreca was third from Romain Dumas, Franck Mailleux and Richard Westbrook in the much improved Glickenhaus. Kevin Estre and Neel Jani’s Porsche held the Guidi-Calado Ferrari off in GTE Pro, while the Perrodo-Nielsen-Rovera Ferrari took GTE AM.

The biggest action of the weekend was however at Silverstone, where Max Verstappen’s Red Bull Honda sensationally beat pole man Lewis Hamilton to victory in the first-ever F1 qualifying sprint race at the British Grand Prix. Verstappen and Hamilton then banged wheels twice in the opening lap of Sunday's main race before a third contact saw Verstappen dusting himself off en route to hospital for observation following a massive accident.

Ferrari’s Charles Leclerc was the surprise leader of the restarted race red flagged after that accident with Hamilton holding a watching brief, only to be docked ten seconds and two penalty points for his contact with the hapless Verstappen. But the seven-time world champion mounted a huge comeback to take 12 seconds out of Leclerc through the second half of the race before passing the Ferrari for a popular home win.

Leclerc ended second from Bottas in the other Mercedes, Lando Norris and Daniel Ricciardo’s McLaren Mercedes and Carlos Sainz’ Ferrari. Once the dust had settled, Hamilton had closed his championship deficit from 33 to 7 points amid a social media firestorm fuelled by an angry Red Bull team.

Moving across to the US, weather delays saw both mainline races shortened. Ford man Aric Almirola fought his way back into the NASCAR Cup Chase with a sensational win at a New Hampshire playoff that was curtailed by darkness following an earlier rain stoppage. And Jordan Taylor and Antonio Garcia led a Corvette GT Le Mans 1-2 while as Roman de Angelis and Ross Gunn’s Aston Martin topped GT Daytona in a lightning-shortened IMSA GT Northeast Grand Prix.