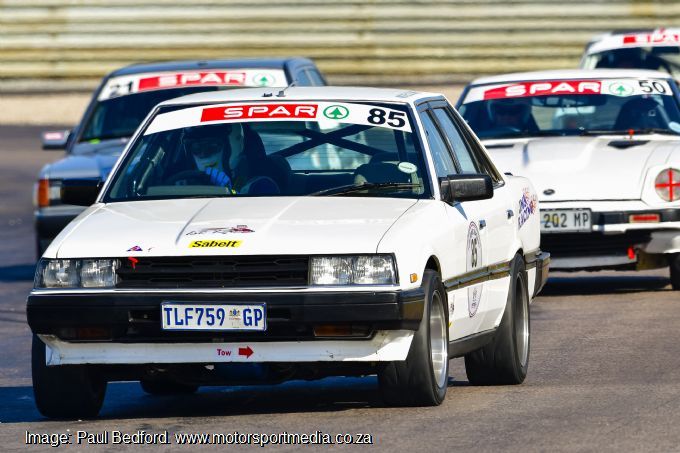 Motor racing is a man’s sport, Right? Well, not really. Ladies have always raced too, even if they are in the minority. But that’s not always the case, as the Charlies SuperSpar Pursuit Series is very clearly proving.

Maria Teresa de Filipis was the first lady Formula 1 racer in the 1950s. South Africa’s Desiree Wilson famously won an albeit non-championship F1 race and Lella Lombardi once scored half a grand prix point. Others of the fairer sex have achieved exceptional results — Michelle Mouton in the WRC, Jutta Kleinschmidt at the Dakar and Danika Patrick in NASCAR and Indy, among many others.

Today more ladies are making ever greater inroads into racing. The second all-girl W Series season, where another standout SA lady racer Tasmin Pepper has shone, gets going very shortly and the new Extreme E Series demands each car is shared by a guy and a girl. All among many a positive move to ensure gender equality in the sport. Of course, motor racing is still very much testosterone-fired and male oriented, which will always be a factor.

But there are also racing series that far better pander to lady racers and in South Africa, it seems that the Historic Racing South Africa Charlies SuperSpar Pursuit series presses all the right buttons for female competitors. Most significantly, Pursuit is a handicap racing series, which means that cars and drivers compete at their own strengths. Rather than starting on a wild grid, each car sets off at a handicap time that it's calculated ideal race time will see finishing at the same time as the rest of the field.

In other words, each car starts alone and by the end of the race, the fastest car should theoretically arrive at the finish at the same time as the slowest car. And at the same time as every other car in between them, too! It's a thrilling climax as cars and drivers jostle for position as each race comes to an end. And being far more gentlemanly by nature as drivers value their cars and would rather protect them, the Charlies SuperSpar Pursuit is now attracting more and more lady racers too.

In fact there are now four girls of all ages and backgrounds regularly racing in Pursuit. They make up over a quarter of the regular field and that number is growing too. We took a little time to find out more about Charlies SuperSpar Fast Ladies, and what attracts them to the series…

Meet the Fast Ladies of Pursuit

52-year old Althea Pretorius drives a Nissan Pathfinder around town and stays brand loyal on track, racing a 1983 Nissan Exa 1.5 Turbo. Anthea started racing three years ago. “My three brothers nagged me to join them on track,” she explains. “I promised I would race as soon as I had a car and before I knew it, my husband had bought me a 1983 Porsche 924 and I was racing! “I have huge support from my brothers and fellow competitors and I’m sponsored by car dealership Carinvest.”

Michelle Smith is 35 and drives a Ford Focus every day. But one weekend a month, she dons her helmet and kit to strap into her cracking 2.8-litre straight-6 '86 racing Nissan Skyline. “I became interested while supporting my husband Johann racing his Historic Mazda,” Michelle admits. “Then I found out about Pursuit and met some of the drivers at HRSA noggins. “Next thing I knew, I was racing at Zwartkops in 2018! “Johann and I race as JMS Racing — we love going racing with the whole crew kitted out!”

32 year old Tegan Leyshon races a Ford Escort 1600 Sport and drives a Toyota Prado on the street. She started racing in 2015. “I was always surrounded by bikes and cars while I was growing up,” Tegan points out. “So when dad David started racing, we thought it would be a great sport to do together. “I took his Scirocco for a test drive at Zwartkops and the rest is history. “I don't have a sponsor, but I do have my dad and mechanic, Richard van der Merwe’s endless support!”

At 25, Lauren van Aarle is the youngest Pursuit Fast Lady. She drives a Ford Focus in the week and races an older '69 Escort. “My family has always raced,” Lauren explains. “Dad found an old Ford Escort and dragged it home, much to mum's dismay! "He built it as a race car and won the championship. “Then I came back from the UK and dad said I should race it, if I got my hands dirty preparing it, and here I am!” Lauren is backed by Ace Auto Salvage, MAGnificent Wheel Repairs and Tiger Wheel and Tyre New Market.

Althea sees her racing uncles, Willie Hepburn and Richard Tudor-Owen as her racing heroes. “Both of them are senior citizens who inspire me, not just because they're still so competitive at their age, but they are also so down to earth. “They race for fun, rather than just striving to achieve — they've mastered the art of enjoying a balanced life.”

Michelle was intrigued watching other ladies racing. “I loved how Cindy Evans gave the guys a hiding racing her Gordini! “Then I took a mostly sideways hot lap with Willie Hepburn in his Opel Rekord V8 and I was hooked! “Johann had a smaller car in mind, but I convinced him to go with the Skyline. “It turned out to be one of only 100 built in SA in 1986. “Pursuit allows us to keep the car original and still be competitive. “I tried a Golf since, but went back — I have a lifetime bond with my Skyline!”

Tegan truly appreciates all her Historic Racing friends and rivals: “Rob van Aarle and I debuted our Escorts on the same weekend and he has been a great mentor over the years. “Everyone in the Charlies SuperSpar Pursuit has always been so kind and helpful I'm hugely grateful to Historic Racing South Africa and all the people involved, who give up their time to make these wonderful race days possible.”

Lauren is far more relaxed about her racing. “My dad is my number one mentor and supporter in everything I do, both on and off the track! “I also have the most helpful pit crew — luckily my best friend and boyfriend let me put my feet up while they do all the work out of love!”

One and All, These Ladies Love to Race

Althea Pretorius' racing goal is to do the best she can. “I love the thrill of constant improvement and I really enjoy the adrenaline rush and excitement of the race.” Althea finished third in the 2019 Charlies SuperSpar Pursuit Championships with just 18 months of racing experience and that came as a huge surprise! "It’s not just a privilege to race,” Althea admits. “I highly value the opportunity to participate in motorsport!”

Michelle Smith’s short term target is more racing related: “For now, less breaking out!” Drivers are given a strict minimum lap time limit to guard the handicap in Charlies SuperSpar Pursuit racing — go too quick on one lap and you're out! With that in place, Mrs Smith has more adventurous ideas: “I'm very keen to try rallycross one day — it looks interesting and seems a real test for one’s ability behind the wheel!"

Tegan Leyshon just loves to race, even though she had never thought of it before spontaneously taking up Pursuit racing: “I just want to get out there and have as much fun as possible as often as we can!” she smiled. "And to keep it on the 'black stuff' of course!” Lauren is likewise chilled about her racing. “I'm not very competitive — my main goal is to have fun and enjoy a sport I love that not many people, not least of all ladies, have the privilege to participate in.”

All in all, the Charlies SuperSpar Pursuit Series offers anyone who would like to go racing more for fun than just to prove who’s boss, a fantastic alternative. It caters for classic cars too, which all the racers want to preserve, first and foremost. All of which makes Pursuit a really compelling option for ladies — and gentlemen — keen to race, but not bothered by all that regular song, dance and racing bravado. Find out more at www.historicracing.co.za.