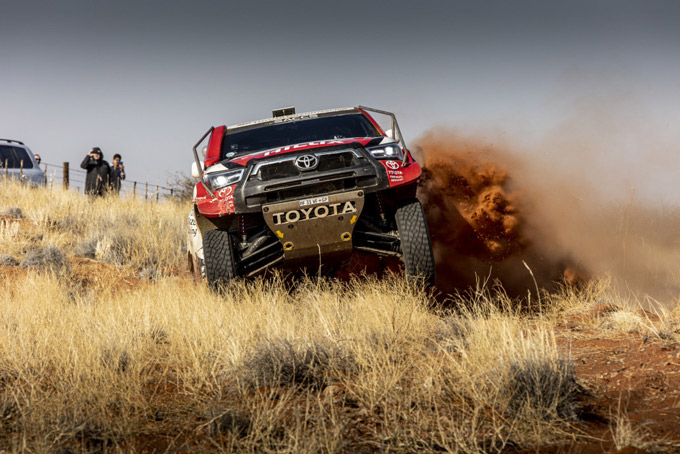 As the dust finally settled over the 2021 TOYOTA GAZOO Racing SA 1,000 Desert Race, four TGRSA crews finished in the top ten of the only marathon event on the calendar. After three days and 1,000 km of racing, it was Henk Lategan and navigator Brett Cummings who recorded the best result for the team.

The defending champions had a rollercoaster race, suffering two punctures during the qualifying race, and fighting their way back to win the first day of the Desert Race. A broken side shaft put paid to their chances for overall victory on the second day of the race, though they were in the lead for most of the day. In the end, they finish just 3min 16sec behind Brian Baragwanath and Leonard Cremer in their Century CR-6 buggy, to secure second place in the overall standings.

“We were very pleased with Henk and Brett’s performance this weekend,” said TOYOTA GAZOO Racing SA Team Principal, Glyn Hall, from the Designated Service Park (DSP) at the Upington Showgrounds after the race. “Not only did they show their class by fighting back after a disappointing qualifying race, but they also made the most of our new turbo-powered Toyota Hilux, narrowly missing out on victory on the car’s maiden outing.”

The new car features an all-new chassis, and a 3.5 litre twin-turbo V6 engine, which heralds a new era for the team: “We ran the car for the first time earlier in the week leading up to the Desert Race, and I can’t praise my team highly enough for getting the car race-ready in an impossibly short amount of time,” said Hall.

Despite the condensed schedule, the new car showed its potential by winning the first day of the race outright, and may well have gone on to overall victory, were it not for a freak incident that saw a damaged fender puncture the boot of the side shaft, resulting in the failure of that part. This left Lategan/Cummings with limited drive for the final section of the race – a situation that was exacerbated by a right-rear puncture near the end of the race, which the crew elected not to change, as they were within sight of the finish.

Three more TGRSA crews were in action in Upington, with Giniel de Villiers and Dennis Murphy finishing in 5th overall. They had teammates Shameer Variawa and Danie Stassen just 5min 16sec behind them in 6th overall – a power performance by both crews, though both had aspirations to finish on the podium.

“Were it not for multiple punctures for the whole team, the results may well have been very different,” said Hall. “Shameer and Danie drove a measured, clean race, and a podium position seemed well within reach. But punctures put paid to their aspirations, and dealt a crippling blow to Giniel’s attack.”

But the bulk of the punctures were suffered by Guy Botterill and Simon Vacy-Lyle, in their first race together for the team. Botterill had previously competed for TGRSA as a stand-in for Lategan, who was injured at the time. Vacy-Lyle had navigated in the championship before, but this was his first outing as part of a factory team. The pair had shown good pace, but more than a dozen punctures over the course of the weekend negated their chances of a Top 5 result.

“Guy and Simon had a tough time with punctures, and had to settle for 8th place overall,” said Hall. “Even so, we are pleased to have all four our crews home not only safely, but in the Top 10 of the Desert Race.”

The highlight of the race for TGRSA was undoubtedly the encouraging performance of its new turbo-powered Hilux. Despite a highly compressed development period, the engine performed as expected, never missing a beat. Were it not for a freak incident, the car may well have won the Desert Race on its maiden outing.

“We are looking forward to continuing the development of our new Hilux,” concluded Hall. “The car shows a lot of promise, and the new chassis allows for significant development going forward. While we are obviously disappointed to have come so close to a win, and then losing out in the final sector of the race, we have every reason to be proud of our achievements here this weekend.”

The 2021 TGRSA 1,000 Desert Race saw the iconic motorsport event moved to a new location around the Northern Cape town of Upington. The terrain comprised rocky tracks, sandy riverbeds and soft dunes, and offered a stern test to the crews of the South African Cross-Country Series (SACCS). The Desert Race was previously hosted in Botswana, but the ongoing COVID-19 pandemic made it impossible for the race to take place there this year. Upington and its surrounding areas offered an enticing alternative, and Africa’s toughest automotive event delivered all the thrills and spills that it is famous for.

The next round of the championship is the Vryburg 400, which is a double-header that will see the SACCS crews compete in Round 4 and 5 of the 2021 championship on the weekend of 13 and 14 August.