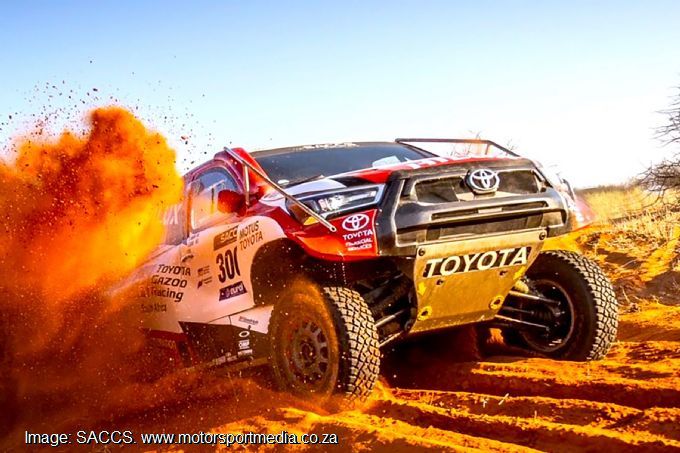 It was a dream DTM debut for birthday boy Kelvin van der Linde, who put his Audi R8 on pole position before storming to a lights to flag victory to leave Monza in the championship lead on Sunday.

And in Formula E Porsche's Pascal Wehrlein dominated the Mexican first race only to be farcically disqualified on an admin error. That left Lucas di Grassi to lead Rene Rast to an Audi Puebla E-Prix 1-2.

Three more Hiluxes, privateers Chris Visser and Albertus Venter and Gazoo Racing duo Giniel de Villiers and Dennis Murphy, and the quickest crew on Sunday, Shameer Variyawa and Danie Stassen were next up ahead of Red-Lined Motorsport duo Conrad Rautenbach and Riaan Greyling and Guy Botterill and Simon Vacy-Lyle’s fourth Gazoo Hilux. Malcolm and Frans Kock’s Ford Ranger won Class T, Lance Trethewey’s King Price BAT was first Special home and Cecil and Eldarus Larney’s Can Am was the top Side by Side.

There was also two-wheeled Cross Country action where Ian Rall powered is 250cc OR2 machine to GXCC Northern Regions victory at Ventersdorp from open class OR1 winner Mike Pentecost and 200cc OR3 winner Matthew Wilson to a Husqvarna 1-2-3. Second OR3 man Taki Bogiages’ Kawasaki was close behind ahead of OR1 trio Hein van Niekerk’s KTM, Tyron Beverley on a Husqvarna and Kawasaki lad D'artagnan Lobjoit.

The Car Care Clinic 111 Sports, GTS and Saloons each raced a sprint, before combining in a 40-minute night-time enduro. Charl Smalberger took both 111 wins in his Golf GTI, while Jono du Toit and Brett Garland’s Honda Civics shared the Superhatch wins.