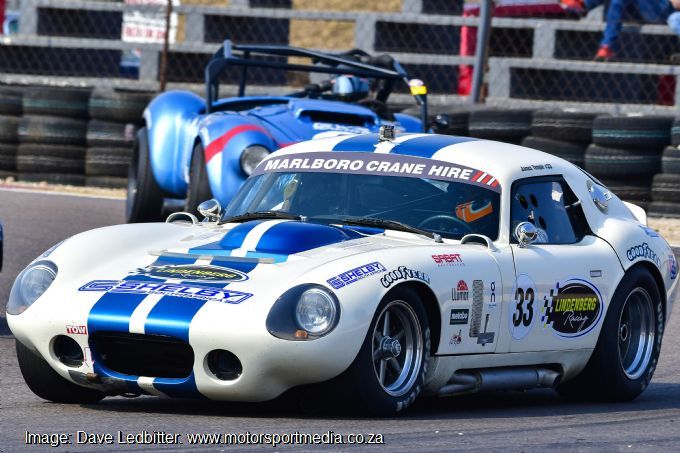 Zwartkops’ twentieth Passion for Speed Festival of Racing kicked off with a cracking full Saturday’s racing as local stars bust the lockdown blues to deliver a brilliant winter warmer. The race meeting that stretches back to the days of the Piper series sparkled in spite of a lack of both international entries and trackside spectators for the first time in its illustrious history, but fans were treated to a full day’s live streaming instead.

Ian Schofield’s Investchem ex-Nols Nieman 1977 March 77B was untroubled in the Historic Single Seaters as he trotted away to leave a varied field to tussle behind. Formula Ford trio, Ben van der Westhuizen’s 76 Royale RP 24 field off Des Hillary and Paul Richardson’s Infinitude Dulons for second in race 1 ahead of Colin Clay’s 62 Lotus 23C and Wihan Tiedt in sixth in his WH Auctioneers Dulon MP15B. Clay and Richardson swapped positions in a similar Race 2 result to end up in that order overall as the rest finished as they did in heat 1.

Moving over to the contemporary classes on the day, the G&H Transport Extreme Supercars delivered a couple of entertaining races as Charl Arangies escaped a fraught early first race to deliver a double victory and take the day from Paulo Loureiro’s Combined BMW 335i. Kris Budnik’s Bucketlist Viper and Ben Morgenrood’s Lexus shared out the thirds after Arangies had to fight past Loureiro in race 1, but the real action was in the dice of the day Balance of Performance GT3 class second race.

Rory Atkinson’s BHIT Industrial Transport machine led Waldie Meintjies    Pozidrive car to a double win in a chaotic all Polo Volkswagen Challenge day. Wayne Masters and Dawie van der Merwe shared out the thirds as Dawie took the place for the day. Stiaan Kriel returned in his T-Rex Polo to take a double win over Polo Cup wunderkind in Class B with Stuart Mack in close attendance and Pierluigi Muzzulini took a double C win in his FSS Polo.

There was a familiar ring to the Mobil 1 V8 Supercars’ first race top three as Thomas Reib blasted his Café 9 Chevy Lumina off pole to win race 1 from old rivals Franco di Matteo’s Deltec and Mackie Adlem’s Jaguar XKRs. But there was a fresh look to race 2 when Adlem beat fresh faces Richard Fuller’s Reventon Mustang, Warren Lombard’s Pepboys Falcon and di Matteo to the win, to take the day from Fuller and Reib.

Jonathan du Toit turned the tables on Garland to take Superhatch endurance honours from Garland and Dannhauser, while Ismail Baloi’s Honda Civic took Class B and Almero van Eck Class C in his Barnes Polo. Garland took the day overall from Dannhauser after du Toit swapped cars between races, as Baloi and van Eck took the classes for the day.

The racing was backed by on track displays and parades including Paul Schofield giving his F1 Minardi a trot and a Ferrari expo. The Passion for Speed action continued with more racing on Sunday as the HRSA Historic Saloons, Charlies Super Spar HRSA Pursuit Series, Bridgestone BMW Car Club, Lotus Challenge and DOE Formula Vees take to the track for another cracking day’s historic racing action live streamed through www.zwartkops.co.za and the circuit’s social media platforms.