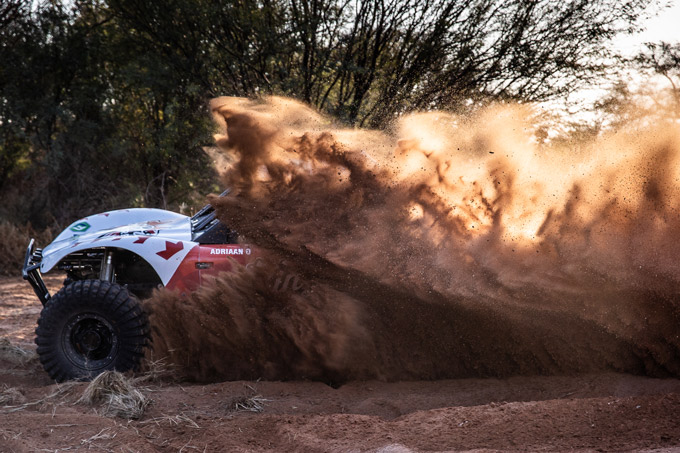 The former champions, Lance Trethewey and navigator, Adriaan Roets kept their cool under difficult racing conditions at the Toyota Gazoo Racing SA (TGRSA) 1000 Desert Race to claim the overall victory in the Special Vehicle Category after three days of punishing racing and almost a thousand kilometres.

The TGRSA 1000 Desert Race took teams competing in the South African National Cross Country Series (SACCS) to the Upington area in the Northern Cape for the third round of the series. This race, the only marathon event on the calendar, traditionally takes place in Botswana, but due to the COVID pandemic, the TGRSA 1000 Desert Race was relocated for the 2021 season. Competitors took on the 105km Pirelli Qualifying Race on Friday with the results determining the starting order for Saturday with almost 400 kilometres of racing awaiting the crews.

The combined results of the first two days were then used for the starting order on Sunday when a new loop of 200 kilometres had to be completed twice with teams starting and finishing at the Upington Expo Showgrounds. And after three days and a total of 12 hours 36 minutes and three seconds of racing, Trethewey/Roets were victorious in their Schalk Burger Motorsport BAT and also claimed the top spot in the Class A championship.

The team led the way from day one, but had their fair share of issues that included six flat tyres during the three days while fuel pressure problems and having to drive for 25 kilometres with only three wheels on the final day, tested their perseverance. They were under pressure on the final day as their closest opposition, Clint Gibson/Alaric Smith (Dirt Sport Stryker) had a fairly clean run albeit losing time with a flat tyre on the last day.

Gibson/Smith started second behind the leaders at the halfway mark on Saturday and eventually finished only four minutes and 12 seconds behind the former champions to claim the second place overall as well as in the Class A championship.

Going as fast as possible but playing it safe to minimize the risk of losing time due to flat tyres or mechanical problems and to get to the finish each day, was the name of the game for those who aimed to bag good points at this marathon event. Like the two leading teams, John Thomson/Maurice Zermatten (Zarco) are also experienced desert racers, but some mechanical issues resulted in them losing time during the first half of the race. They then took it easy on the third and final day to finish third overall and in Class A despite losing time with a flat tyre.

The desert took its toll on the big vehicles and there were no other finishers in Class A.

The thick sand and fast routes proved to be a real challenge for the Can-Am Side-by-Side vehicles in Class G of the Special Vehicle category and only three teams of the seven entrants could manage to complete the three days with four more having to return with lessons learnt, but not points this time.

A careful approach worked in the favour of the newcomers, the Larney brothers, Cecil and Elardus, who only started racing this year. The brothers were second in Class G at the halfway mark of the race on Saturday and despite a tough day for driver Cecil behind the wheel with no power steering on the final day, the brothers claimed their first victory of the season by winning the class (14:05:59).

They were followed by the SxS of Dean Bradbury/Timmy Botes (14:18:11) who finished second after they were third at the halfway mark of the race on Saturday. The leaders after the first two days, Theo Erasmus/Edward Odendaal, ran into problems on the final day and had to call it a day on Sunday.

The siblings, Kent and Justin Rutherford (Enza Construction Can-Am) were the youngest ever competitors to participate in the Toyota / TGRSA Desert Race with Kent who turned 19 on Sunday. The brothers were tested to the limit and after they posted the fastest time on Friday, they experienced suspension problems on Saturday and could not finish the day. Their team managed to do the necessary repairs on Saturday night for them to be able to start again on Sunday.

They suffered rim failure on Sunday, but pushed through too finish. The youngsters will be able to share their adventure with their friends while their trophies for finishing third in Class G, will be proof of their grit and determination.

The 2021 TGRSA 1000 Desert Race proved to be quite a challenge for the teams in the Special Vehicle category, but the experience was enjoyed by the teams.