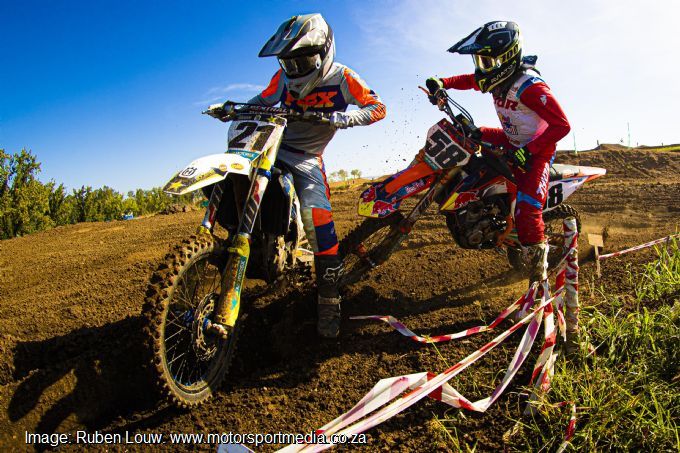 If the opening round of the 2021 Cannabis Energy Drink & TRP Distributors South African National Motocross Championship at Terra Topia was anything to go by, fans can expect two certainties at Rover’s second round in Port Elizabeth Saturday 3 April. One is that the action will probably be even fiercer and two, local EP Red Bull KTM hero, Tristan Purdon will have a target on his back.

Cathcart rider Purdon won both MX1 and MX2 in Jozi last time out and his rivals now want revenge in both the open 450cc and quarter-litre classes. Tristan will have to deal with David Goosen’s Rockstar Energy Drink Husqvarna, Anthony Raynard Tinswalo Yamaha, Jesse Wright's Out of Africa Monster Energy Yamaha in both those classes.

Others to keep an eye on in MX1 include KTM riders, Holeshot King Johan Vogelesang, Bradley Cox and Jayden Proctor in MX1. And expect Cameron Durow on a Red Bull KTM, Dalton Venter’s Yamaha and Jayden Proctor on a KTM to also be at the sharp end in MX2.

Over-40's Masters champion Ian Topliss will be back at it in MX3, where Dwayne Kleynhans’ KTM and Deon du Toit on a Kawasaki could deliver some over 30s resistance. Kayla Raaff will want to get back to her usual dominant Ladies Motocross ways on her Kawasaki, but not if KTM lass Leah Heygate has anything to do with. They shared the honours last time out. Husqvarna sisters Jadene and Cheyenne de Lima will be among the other ladies looking for a little Nelson Mandela Bay success this weekend.

Expect another full grid of 125cc High School class fighters to be out to stop last round winners, Red Bull KTM rider Jonathan Mlimi and Miguel de Waal on another KTM. Out of Africa Monster Energy Yamaha lad Ethan Hoffman, Mark-Anthony Filip’s KTM and Luke Grundy’s Husqvarna are among those more likely to depose them.

The 65cc juniors will no doubt pay more attention to yellow flags this weekend after several leading riders suffered penalties last time out. Which means Gas Gas rider Blade Tilley, Jack Pullen's Husqvarna and Trent Valsecchi's KTM will be out to make up a little lost ground. They will have. Blake Frost on a KTM, Aiden Henley's Yamaha and Husqvarna trio Sven Larsen, Nicol Smit and Alex Cooper to deal with too.