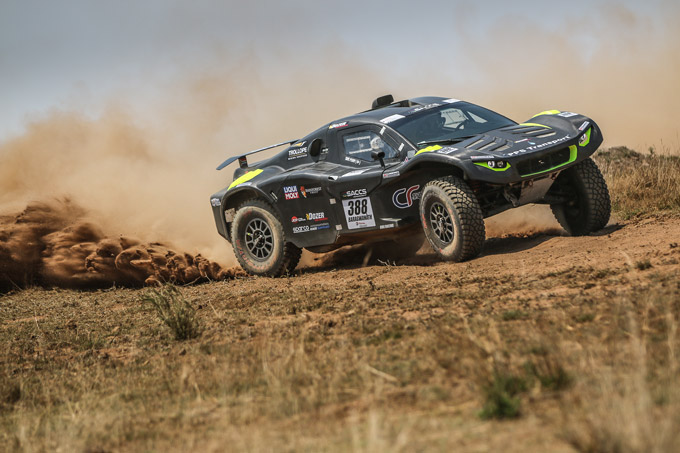 An impressive entry in the Production Vehicle Category of the Mpumalanga 400 Super Event, the opening round of the 2021 South African National Cross Country Series (SACCS) that takes place on 26 and 27 March in the Dullstroom area, predicts action packed racing on both days of the event where a new race structure is being introduced.

New names and new vehicles combined with shuffles in the FIA and Class T championships plus new sponsors and partners, all add to the excitement of a thrilling first round that will play itself out in Mpumalanga.

Due to COVID-19 Regulations the Mpumalanga 400 will still be a closed event with no spectators allowed.

No less than 16 teams have entered the FIA Class and having a look at the quality of the field, tough battles can be expected over the two days. The name of the defending drivers’ champion, Henk Lategan, is unfortunately not on the list as he is still recovering from an operation after a shoulder injury sustained at the Dakar Rally in January. His navigator, Brett Cummings, will read the notes for multiple SA National Rally Champion, Guy Botterill, who will make his national cross country debut in the Toyota Gazoo Racing SA Hilux. Botterill, who had his first outing in the Toyota Hilux at the Barberspan 300 Northern Regions event earlier this month, and Cummings will be a combination to be reckoned with.

Giniel de Villiers and Shameer Variawa will again be behind the wheel of the remaining two Toyota Gazoo Racing SA Hilux vehicles with former navigators’ champion, Dennis Murphy, reading the notes for De Villiers while the name of the navigator for Variawa will be announced soon.

The Ford Castrol Cross Country Team have the same line-up with Lance Woolridge and Elvéne Vonk again teaming up while Gareth Woolridge and Boyd Dreyer will be sharing the cockpit of the second Ford Ranger. What has changed from the 2020 season, is the two brand new 3.5-litre V6 twin-turbocharged EcoBoost Rangers the team will debut in the FIA Class Championship. These vehicles are specifically designed and developed according to the latest FIA Cross Country International Regulations.

Red-Lined Motorsport in partnership with the Penta Motor Group will have four vehicles in the FIA Class. Team regulars, Ernest Roberts/Henry Köhne, will be joined by another former Dakar Rally competitor, Conrad Rautenbach and navigator Riaan Greyling while Philip Botha/Roelof Janse van Vuren, who entered the national scene late last year, will also be in action. Eben Basson is making his national debut with experienced navigator Gerhard Schutte reading the notes.

Back from an extremely successful experience in the recent Dakar Rally, the pairing of Brian Baragwanath and Taye Perry (Century Racing CR-6) will take on the SACCS season focussing on more great results and podium finishes. There will be two more Century Racing vehicles in the line-up at Dullstroom with experienced Mark Corbett and Rodney Burke (CR 6) and Dewald van Breda and Johann du Toit (CR5) stepping up from the SxS class.

The two Schalk Burger Motorsport teams will also aim for a successful start to the season in their King Price Xtreme vehicles. After a crash and injuries that forced Schalk Burger to sit out the 2020 season, the enthusiastic driver is back in action with Henk Janse van Vuuren in the navigator seat. Namibian driver, Thilo Himmel, will be behind the wheel of the second vehicle with Armand du Toit as his navigator.

Gary Bertholdt experienced an up and down 2020 season in Class T and has now moved to the premier FIA Class with Siegfried Rousseau in the hot seat of the Toyota Hilux. The father and son pairing of Johan and Sean van Staden will also be back for more of the action in the FIA Class in their Renault Duster now in the colours of Moto-Netix KEC Racing.

Chris Visser and Danie Stassen (Toyota Hilux) have unfortunately had to withdraw from the event.

Ford is dominating the numbers in Class T with its Ford Ranger and five teams, including a development team, in the colours of Neil Woolridge Motorsport (NWM) will be under starting orders while the defending champions as well as a former Dakar Rally finisher will also be part of the line-up. The 2020 Class T champions, brothers Johan and Werner Horn (Malalane Toyota Hilux) will hope to get their season off on a high note and will aim for a second consecutive Mpumalanga 400 victory in Class T.

Former Dakar Rally finisher, Hennie de Klerk is back in action and will take on the rest of the field with navigator, Werner A. Weiss in a BMW X3. They will be up against the five NWM Ford Rangers. Wors Prinsloo and André Vermeulen, who finished the 2020 season as the runners-up in Class T as well as Malcolm and his son, Frans Kock, are again up for the challenge while Christo Rose and Arno Olivier, who raced in the Special Vehicle Category in the Side-by-Side class last year, have swopped their smaller four wheels for a bigger vehicle in Class T. The husband and wife team of Bernard and Minette Johnstone, are now also donning the colours of Neil Woolridge Motorsport.

The development team consisting of Wiseman Gumede (42), a workshop delivery driver for NWM for more than a decade and KwaZulu-Natal Regional Rally Champion, Fanifani Meyiwa, will be making their SACCS debut at Dullstroom. The Mpumalanga 400 will be a steep learning curve for the NWM Development Team who might just pull a rabbit out of the hat at Dullstroom.

The Mpumalanga 400 is a Super Event that will start with a short 10km Pirelli Qualifying Race at 10:30 on Friday, 26 March. The results will determine the starting order for Loop 1 that will start at 13:30 and will be approximately 102 kilometres in distance. With about 112 kilometres done on Day 1 in the Tonteldoos area, the action will start again at 08:00 on Saturday, 27 March when teams will take on the 130 kilometres of Loop 2, the Belfast loop, in the order of Friday’s combined results. The third and final loop, a combination of the Tonteldoos and Belfast loops, will be approximately 210 kilometres.

All the action will take place from the Cricket Oval in Dullstroom where the Race Headquarters as well as the Designated Service Point (DSP) and Start/Finish of the event will be accommodated. No spectators are allowed, however, enthusiasts can follow the race on the RallySafe App that can be downloaded free of charge from the Apple iStore or Google Play Store.  Information will also be available on the SACCS Telegram and Facebook portals.