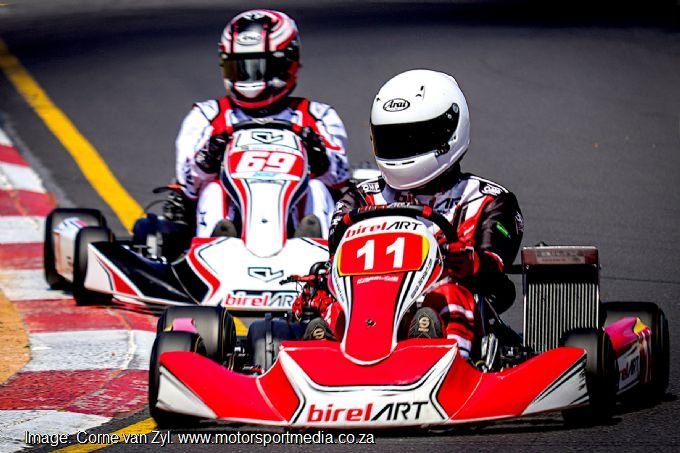 Rotax Max Challenge South Africa 2021 will not only explode into extreme karting action at its opening round at Killarney in Cape Town Saturday 27 March, but the series kicks off a new era of cohesion summed up by the slogan 'Together We Race'.

“There has been much water under the Rotax Max Challenge South Africa bridge since we closed off that crazy lockdown season at the end of last year,” series boss Ed Murray pointed out. “But the most fundamental step we have taken is summed up by the words, 'Together We Race’. “There is no more us and them, whether it's organisers, competitors or officials, we are all in Rotax Max together and our family is ready to race our first National of 2021.”

And if the opening rounds of the three main Rotax Max Gauteng, Cape and KZN Regional Championships are anything to go by, Killarney appears set to deliver some dynamite racing action when those regions come together — to race as one…

The Cape kids will be the ones to beat in premier division DD2, where SA champion Sebastian Boyd is out to do it all again. But he has had a hard time with compatriot Joseph Oelz, who has been unbeaten in the six Cape championship races so far this year. One man likely to prove a thorn in their sides is on form KZN kid Rob Whiting, while brothers Jamie and Brandon Smith and Wayland Wyman will be among a crack Gauteng contingent.

Moving on to the primary school classes, there will be new South African under-13 Mini Max champion this year, where flying Cape kid Joaquin de Oliveira appears be the lad to beat at Killarney. He will however have East London lad Caleb Odendaal, Wian Boshoff and Erich Heystek out of Gauteng, KZN kids Travis Mingay and Dylan Watkins and locals Joshua Smit, Sabelo Ntuli and Jordan Wadeley and Oliver Roach fully on his case.

Local lad Keagan Beaumont arrives at the under-11 Micro Max National off three-heat rout last time, However not only will his local rivals Kegan Martin, Aiden Beaumont, Matthew Chiwara, Matthew Roach and Siyabonga Ntuli out to prove a point, but Jozi lot Reagile Mailula, Rafael da Silva, Kegan Martin, Mattao Mason, Cristian Verheul and Johan Nolte and KZN kids Harry Rowe Kyle Spies and Troy Pieterse will also be out to get him.

Expect Killarney karting warfare in the baby Bambinos, where Cape lad Michael Danks will be keen to stamp down his home advantage alongside local rivals Siyabonga Ntuli, Liam Wharton and Zach Mc Auley. Expect out of town competition from upcountry crew Santiago Frade, Matthew Shuttleworth, Maddox Mason and Shayaan Mohamed, and from KZN lighties, Troy Pieterse and Kayden Pistaur too.

All the Rotax Max South African champions will earn seats in the annual Rotax Max ‘Olympics of Karting’ grand Finals at the end of the year, so expect no quarter to be asked or given, starting from Killarney on 27 March. The racing happens behind closed doors, but log in to www.kart.co.za through the day on the 27th for the live stream and to keep tabs on developments from the Cape.