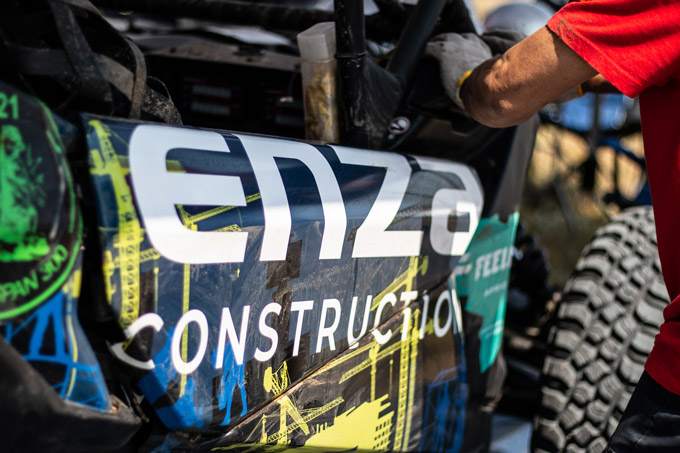 A new season, a new look and a new navigator is the mantra that ushers in the opening round of the 2021 SA Cross Country Series (SACCS) for young Kent Rutherford.

Kent will be joined by long standing friend and fellow St John’s College graduate, Kabelo Mokanyane, in the navigators’ seat with the pair racing under the Enza Construction banner.

Kent, still one of the youngest competitors in the SA National Cross Country Championship started his racing career at the tender age of fourteen as navigator for his dad, a former SA National Special Vehicle Champion, Archie Rutherford.  Since his debut in 2017 Kent has competed in 14 cross country events.

Despite his experience, Kent is still considered a rookie in the drivers’ seat with only three events under his belt in the 2020 season alongside Archie reading the notes.

The versatile Kabelo’s other sporting activities include cycling and golf and with his keen interest in motorsport and his competitive nature, he cannot wait to develop his skills as a trusted navigator.

In their inaugural race, Kent and Kabelo in the Enza Construction Can-Am Maverick took the top step of the podium in the SxS Class and sixth Overall behind seasoned national championship competitors.

“This was my first experience in racing conditions and I thoroughly enjoyed the challenge. It was a tough route but Kent and I worked well together as a team to achieve a very pleasing result,” said a composed Kabelo.

“This is an incredible result for the team and a good start to our relationship,” said Enza Construction CEO Rowan Crowie.
Enza Construction, with its headquarters in Sandton has roots stretching back four decades and was started by father Barry Crowie as a family business.

Today, Enza Construction boasts a management team who combined have more than 100 years’ experience in the trade, a knowledge base which has proven invaluable in its rise and central to its ability to continue delivering on contracts with clients.

“We are extremely proud of our heritage and cherish the opportunity to engage and nurture the youth.  We look forward to our involvement with this young team in what appears to be a truly family orientated sport”, Rowan added.

Kent and Kabelo will be making their SACCS National Championship debut at the Mpumalanga 400 in Dullstroom on 26 and 27 March.  Make sure to follow this promising team in their quest to be the future stars in their field.