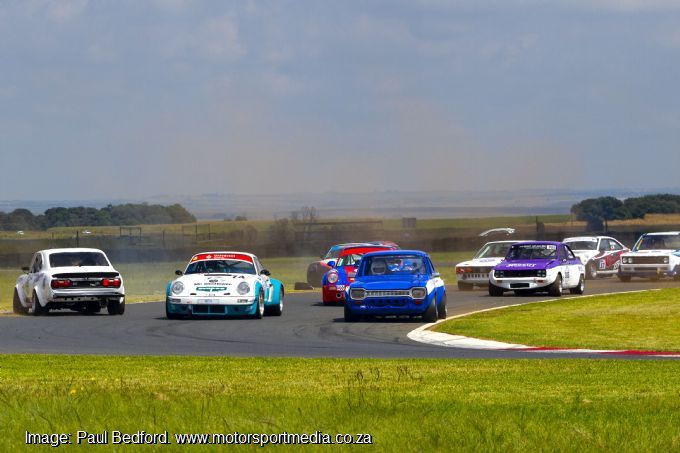 The 2021 Historic Racing South Africa season started on a high and occasionally dramatic note at the Red Star Raceway near Delmas in Mpumalanga on Saturday. A few changes to the Pre-90 Sports and GTs and Pre-80s Saloons' rules should help shake things up, but little could stop Willie Hepburn this weekend, while a new class added a new element to the Charlies SuperSpar Pursuit series, where Wynand du Plessis Sr. emerged on top.

Willie Hepburn made his intentions clear by qualifying the Pre-90 Class A Amtec Opel Rekord V8 he raced himself in period 35 years ago, four and a half seconds quicker than PE visitor Rudolf de Vos’s spectacular Pre-80 Class B Basil van Rooyen replica ‘Little Chevy Can Am and Richard de Roos’ Porsche 911 RSR, at the head of a healthy 33 car grid.

Hepburn duly scampered off to take a dominant 35 second victory over de Vos who had to work for second from Stefan Snyders’ Class A Steton Porsche 911 RSR, with Andre van der Merwe’s similar Evapco car next up, but the results behind them were a little shaken up following a first lap mix-up.

Without the chaos of a first lap incident, Hepburn then blasted to an 11-second win over Snyders, van der Merwe and Bailey in heat 2 after de Vos’ Can Am shed a wheel and retired. Class D top two Konig and Green were next up ahead of Class C man van Vuuren, de Roos’ delayed Porsche and third D man ten Napel.

Rules changes now see the Sports and GTs scoring Class A Pre-80 points on a handicap basis, which means that the Class A Overall Champion is likely to be a Sports and GT driver. Also new for 2021, a brand new Modified Fines class for tweaked street cars joins the Charlies SuperSpar HRSA Pursuit handicap championship, which also enjoyed two cracking heats on the day.

The next round of the Histroic Racing South Africa season is at the Phakisa Freeway at Welkom in the Free State on 10 April, by when with a little luck, race starved fans will hopefully be able to spectate again.