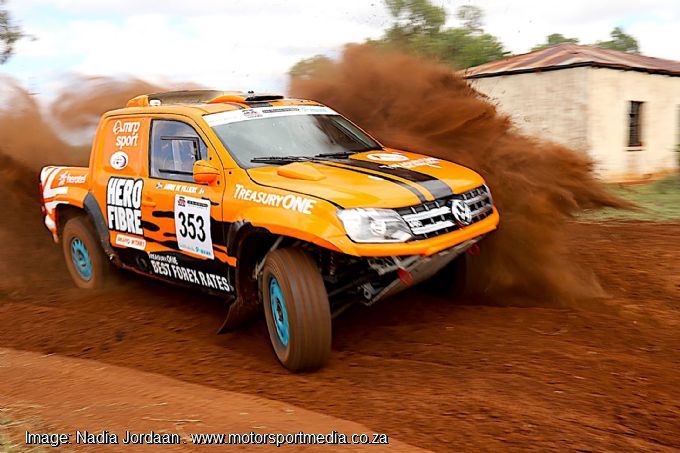 2018 Dakar Car Rookie winner Hennie de Klerk is back at it and preparing for a third attempt at the race in 2022 in Saudi Arabia. He will race his refreshed and renewed yet tried and trusted TreasuryOne Motorsport Amarok, with which he has already started his preparation campaign.

De Klerk and navigator Adriaan Roets used the weekend’s tough Beisiesvlei 300 Inland Off Road Championship opener to continue with their car and crew Dakar preparations and stormed home to a fine second in spite of one or two challenges along the way.

“Saturday was the start of a brand new challenge for TreasuryOne Motorsport!” Hennie de Kerk explained. “We will return to the Dakar next year with our old faithful TreasuryOne Forex and Hero Fibre VW Amarok, with which we took Dakar Rookie honours in 2018. “We used the weekend to continue our development program on the bakkie.

“The Amarok has just been refreshed by WCT Engineering and is being looked after by Tjart from The Prep Shop in Rustenburg, who will also support us at the Dakar in January.” De Klerk and Roets raced in the FIA category at Beisiesvlei, where they had the double jeopardy of opening the road after being seeded number one, and wet and challenging  conditions to deal with on the route.

“It was very wet after all the rain — the organisers even had to reroute the race at two places that would have been impassible. “The long grass also made it tricky to find our braking points, so we ended up off the beaten track once or twice, but still we had a fairly clean run until ten kilometres from the end of the prologue. “Then the left rear driveshaft broke and instantly converted the bakkie from a 4x4 to 4x2 and we were slowed, but we still qualified seventh.

Tjart and the team worked feverishly to replace the shaft before the start to allow Hennie and Adriaan to quickly catch and pass several cars once the race was under way. “The light cars were easy to catch with their 130 km/h speed limiters, but then we took a wrong line into a water obstacle and got a bit stuck,” Hennie reported. “We picked up a puncture not much later and I had to open Adriaan’s door to let him out — he'd better not get used to that idea!

“From there we had a great run, but our old fuel pressure problem raised its ugly head again on the third and final 85 km lap, so we struggled a little with pace to the finish. “Despite all our issues, we ended up second overall for the day. “Tjart did a great job preparing the car and Adriaan’s notes were excellent. “Sure, we had a few issues, but this was a test and we will be back in the Amarok at the Baberspan on 13 March.

Once TreasuryOne Motorsport has the niggles sorted on the Amarok, it will park it to start with its Dakar preparations. At that stage, de Klerk and Roets will continue their Dakar driver and route training aboard the team’s original BMW X3, which Hennie recently bought back, in the Inland Off Road Series. The team entered the BMW for another track racing refugee Roy Obery and veteran navigator Johann Smallberger at Beisiesvlei.

"It was a bit of a baptisim of fire.” Roy admitted. “Our race never lasted too long before a crank sensor stopped us, but we will be back at Barberspan so we can get this car ready for Hennie and Adriaan to keep up their Dakar prep with the BMW while the team hones the Amarok for Saudi Arabia in January.”

“It was a good weekend all in all,” Hennie de Klerk concluded. “We now look forward to a great season in the Inland series while we prepare on all fronts for the Dakar — it's an exciting program that will keep us busy for the rest of the year!”