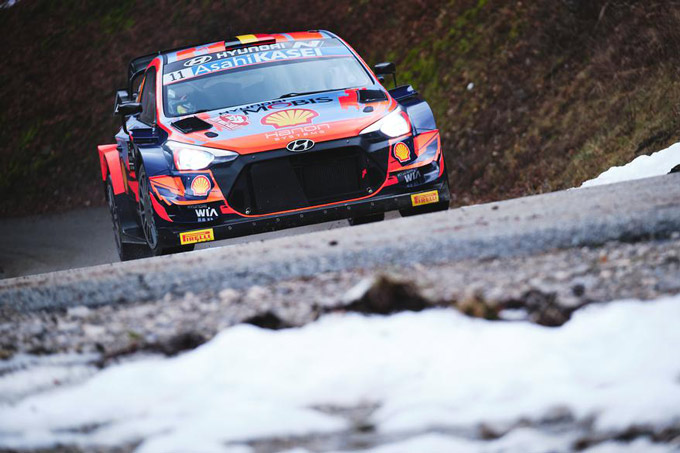 Hyundai Motorsport has opened its podium account for the 2021 FIA World Rally Championship (WRC) with a third-place finish for Thierry Neuville and Martin Wydaeghe in the Rallye Monte-Carlo.

In their first WRC event as a crew, the Belgians picked up the pace when it was needed to advance into the podium positions on the final day. A strong second fastest time in Sunday's opening stage (SS12 Puget-Theniers – La Penne) was followed by their second stage win of the weekend (SS13 Briançonnet – Entrevaux) cementing their third spot.

Dani Sordo and Carlos del Barrio brought their rally-winning partnership to a conclusion with another trouble-free performance. The pair carded the second fastest time at the start of the repeated loop and confirmed their fifth-place finish in the Power Stage.

Following the forced retirement of Ott Tänak and Martin Jarveoja on Saturday, Hyundai Motorsport had just two crews remaining on the final day. It meant that both Neuville and Sordo were eligible for extra points in the Power Stage with rules now extending the bonus opportunity to the manufacturers' championship. Finishing fourth and fifth in the final stage means that Hyundai Motorsport has taken 30 points away from the opening round of the season.

Neuville said: “A challenging start to the new season for us, especially after a late co-driver change. We were able to find a solution to be competitive and, step by step, Martijn and I were able to find more confidence in the car to improve our collaboration and to improve our speed day by day. To finish on the podium is a satisfying result considering the situation we have faced. The job in the car has been really impressive considering the difficulties of Monte.”

Sordo said: “We haven't had a very good rally, so to take some manufacturers' points away is some consolation. From the beginning, we have not really been on the pace and I am not particularly happy with myself, to be honest. We have faced some incredibly tricky stages and there have been some parts where I have just lacked confidence.

“The only thing we've been able to do is survive: to bring the car home and to score points for the team. At the end of the year, they could be very important. We need to reset and go to the next one with full power. It is sad to finish my partnership with Carlos – we've had some good results over the years, and it's been great to work with him.”

Team principal Andrea Adamo said: “This rally has finished in the same way it has gone all weekend. Clearly, it has been totally wrong. I don't know if it is the approach of the people, or whatever, but today we have again shown our limits. For sure, it was not the case to push because we were just licking our wounds and trying to get ahead.

“I personally have to have a deep rethink on many things, because what I have seen this weekend is far from something to make me proud and happy. Something in the approach has to be changed.

“I would like to add a final word for Carlos to mark his final event with our team; to extend my thanks to him for his efforts over the past three seasons, including two memorable victories alongside Dani in Sardinia. We wish him well in the next chapter of his career.”

The FIA World Rally Championship (WRC) heads to the Arctic Circle for the second round of the season, the new Arctic Rally Finland, which takes place from 26 to 28 February around Rovaniemi, where snow and ice conditions will offer crews an exciting challenge.

2021 WRC Manufacturers' standings after round 1: