The old man, the Renault 12 and Renault care service: a touching story from Argentina 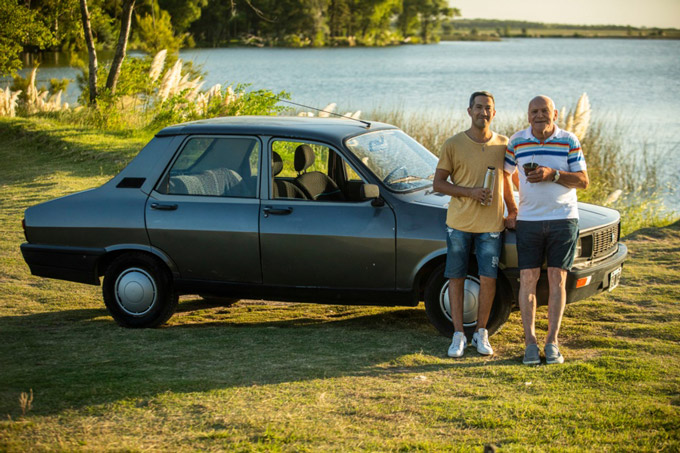 Who has never wanted to make their granddad smile? And, why not, make their dream come true? That’s what Gonzalo did. This young Argentine managed to give his granddad Alberto the gift he had always dreamed of: a Renault 12. This touching story took an unexpected turn when the local Renault Care Service teams decided to help them both restore the vehicle.

It’s never too late to make your lifelong dreams come true! Or for a family member to help you do it. This is what happened earlier this year to Alberto, a retired 76-year-old from General Pico, a city in the province of La Pampa. He had always dreamed of owning a Renault 12, the first car he had driven. He was fascinated by this model, which he defined as “robust” and “indestructible”, but could never afford to buy one.

So someone else made it happen! Gonzalo, one of his grandchildren, decided to wow his granddad. With the money he had saved up working as a DJ and the proceeds from the sale of his own motorbike, he managed to buy the dream gift: a 1993 Renault 12. It needed a lot of repair work, but Alberto was thrilled.

It was a special moment because seeing my grandfather smile is beautiful. He has always helped his grandchildren and he deserved to be fulfilled in return. I'm really happy to have given him this gift.

It could all have stopped there. But then the Argentine press picked up this touching story. And it swept across the country. Alberto and Gonzalo were asked to tell their story on national TV. That was how Renault heard about it and decided to help them refurbish the car.

When we heard Alberto’s and Gonzalo’s story, we were deeply moved and wanted to make them even happier!

It was a golden opportunity to put Renault Care Service’s raison d’être—to keep all its customers’ cars on the road for longer—and its expertise into action. The Argentine after-sales arm contacted Gonzalo and Manera Pérez, the dealership in General Pico. They had all the parts they needed to refurbish Alberto’s Renault 12 and got to work straight away. Then they went the extra mile: Renault Argentina also decided to service his revamped car for life for free.

We wanted to do something and got in touch with Gonzalo and Alberto, to restore this Renault 12. The car is one of our historical emblems. Now I’m sure it will become part of this grandfather’s and his grandson’s story, too. This wonderful adventure is exactly what our brand is all about, it’s what we mean when we call it a “love brand”, when we say that our customers also have a love story with our brand.

We were very surprised how far our story traveled, and especially that a brand like Renault would reach out and offer to help. We really appreciated that as customers of the brand.

SAVING THE BEST FOR LAST

The adventure continued for Alberto and Gonzalo: Renault took them on a tour of the Santa Isabel plant in Cordoba, which built Renault 12s until 1995, to show them how theirs was made in 1993.

It was a moving visit tinged with nostalgia—two feelings that inevitably overcome Alberto every time he sits at the wheel of his Renault 12.

The Renault 12 was unveiled at the Paris Motor Show in 1969 and went on to become a seventies icon in France and across Europe. Its career, until 1980, was fairly conventional: the range gradually expanded, it was restyled in the middle of the decade and production was progressively phased out once its replacement, the Renault 18, was launched in 1978.

But the Renault 12 also had a fabulous career overseas, which lasted well into the noughties! It was sold in Argentina, Australia, Colombia, Spain, the United States, Canada, South Africa, Côte d’Ivoire and elsewhere. It was in Turkey—where it was named Renault 12 then Renault Toros—and in Romania—where it was manufactured under a Dacia license and marketed as the Dacia 1300 then Dacia 1310—that it lasted the longest, retiring in 2000 and 2006 respectively. The Renault 12 was a huge hit in Argentina too. It was built at the Santa Isabel plant in Cordoba from 1970 to 1994. The factory made a whopping 440,000 in those 24 years, ranking the car as its second most produced model!