Chery Tiggo 7 Pro – All the way with you 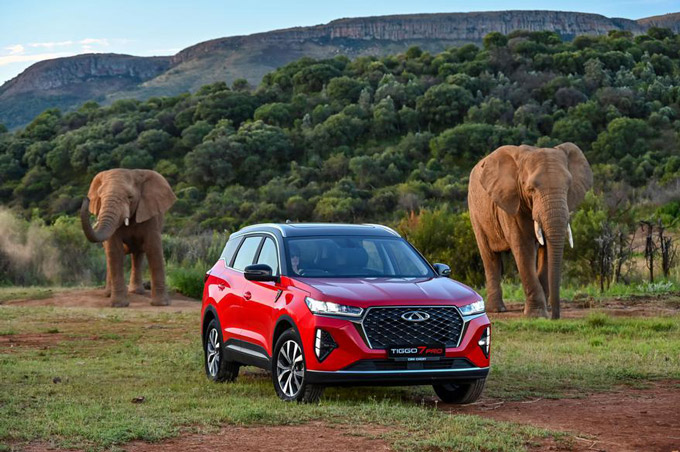 The Tiggo 7 Pro has landed in South Africa to complete the Chery Pro range and bring technology, luxury and modern design to the upper-midrange SUV market.

With this third model, Chery has created a complete line-up of luxury SUVs, offering customers a choice of a compact and sporty model (Tiggo 4 Pro), a larger and more luxurious five-seat SUV (Tiggo 7 Pro) and a flagship SUV with seven seats and an all-inclusive luxury interior (Tiggo 8 Pro).

“At Chery we reserve the PRO moniker for our best SUVs and the Tiggo 7 Pro is no exception.

“From the striking modern and flowing design to the all-digital cockpit, our customers will never feel like they have had to compromise on luxury, specifications or performance when buying a Tiggo Pro,” says Tony Liu, Executive Deputy General Manager of Chery South Africa.

The Tiggo 7 Pro shares many of its siblings’ design cues, which Steve Eum, the Executive Director of Design for the Chery group under the design language of “Life in Motion”.

As seen on the Tiggo 7 Pro, the Chery design language is seen in the hexagonal grille with its three-dimensional diamond-shaped brightwork, the elongated front lights that run from the grille to the start of the sharply creased shoulder line and the deeply scalloped lower bumper and air intakes.

On the side of the Tiggo 7 Pro, unique 18” alloy wheels (with red brake callipers on the Executive model), and a concave-to-convex curve in the side profile create a uniquely sporty feeling. The glasshouse (with standard privacy glass) is framed in a black and chrome combination, which emphasises the vehicle’s sporty stance and helps to create a floating roof design.

At the rear, an edge-to-edge lightbar taillight is only interrupted by the large and bold Chery logo. The roof-mounted spoiler and dual faux exhaust surrounds are standard.

In true Chery fashion, both the Distinctive and the Executive models are extremely well equipped. Both models have electrically adjustable, foldable and heated side mirrors with integrated LED indicators.

All lights are LEDs and switch on automatically. Ditto the LED illumination for the TIGGO threshold sills. Both models have intelligent wide-angle fog lights and light-bar-type LED daytime running lights.

Chery Power has become synonymous with some of the most modern and efficient internal combustion engines in the world and in the Tiggo 7 Pro this is no exception.

Both versions of the Tiggo 7 Pro are fitted with Chery’s 1.5 litre turbo-petrol four-cylinder engine.

The Tiggo 7 Pro delivers its power to the front wheels through an ultra-smooth CVT transmission with nine pre-programmed “spreads”. The gear shifter is fully electronic.

The Chery Tiggo 7 Pro has a 2 670 mm wheelbase with an overall length of 4 500 mm. Under the skin is Chery’s award-winning T1X-platform that was designed for optimum rigidity and weight saving.

For the launch of the Tiggo 7 Pro, Chery has adopted the slogan “All the way with you”. This is in part to emphasise the brand’s bulletproof performance and reliability, but also in support of the fact that the Tiggo 7 Pro has everything and anything that a driver could want in a mid-range SUV, regardless of the application.

The interior is upholstered in durable black synthetic leather with contrasting stitching. The driver’s seat features six-way electric adjustment, and in the Executive model, the passenger seat has four-way electrical adjustment as well.

The leather-clad steering wheel has controls for the infotainment and voice command system and can be adjusted in four directions. Both models have a push-button Start/Stop system.

The first is a 7” digital centre information panel in front of the driver. This floating screen offers a host of customisation options, and it promises clear legibility of all vehicle information in light or dark conditions.

A second 10.25” LCD screen crowns the centre console. This screen, as per other Chery Tiggo Pro models, forms the heart of the vehicle information and entertainment settings. As can be expected, the system has a high-output audio system with Apple CarPlay, Android Auto and Bluetooth hands-free dialling as standard.

The centre screen also projects the image from the standard reverse camera and there are two USB ports in front and one in the second row.

As with the other Pro models, the Chery Tiggo 7 Pro comes standard with Chery’s voice command system that allows for full control of the cabin, climate control and even the one-touch electric windows and (on the Executive model) the operation of the electric panoramic sunroof.

The third screen is flush-mounted below the infotainment system. This screen features the newest technology for the integration of physical knobs (for eyes-free adjustment) and a high-resolution screen for the climate control system.

The climate control can independently cool or heat two different zones. It is fitted with surgical-level N95 air filtering, and it also powers the cooling system of the cooled central glove box.

The list of luxury features in the Tiggo 7 Pro is only overshadowed by its list of standard safety and security features. Indeed, this model received a full five-star rating from the Chinese New Car Assessment Programme (C-NCAP).

The Distinctive model has four airbags as standard, and in the Executive model there are two additional curtain airbags for a total of six.

All Tiggo 7 Pro models have an alarm and immobiliser system, remote locking and window closing and an electrically operated tailgate with programmable height adjustment. The boot has 475 litres of storage or up to 1 500 litres of storage with the 60:40 seats folded down.

While the luxuries are all included, Chery’s designers have given customers a wide range of colour choices.