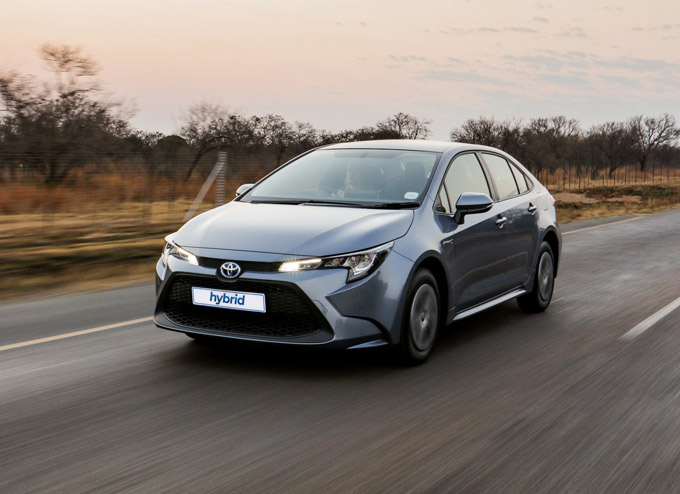 "Hybrid: a term introduced to the automotive world by Toyota to identify a dual-source powertrain combining a traditional internal combustion gasoline engine with a high-current electric motor."

This revolutionary powertrain technology debuted in 1997 in the Toyota Prius. While the Prius has undoubtedly been the poster child for Hybrid, Toyota has recognised the need to expand this new energy technology to other mainstream model ranges - in pursuit of greater Hybrid adoption and wider market appeal.

Recent developments in the global motoring arena have placed a far greater emphasis on New Energy Vehicles (NEV) and alternative propulsion technologies. With the continued development of new energy alternatives and further advancements of battery technology, customers are seeking more advanced drivetrain options and greater levels of efficiency without compromising on their core vehicle requirements.

This Is where Toyota's NEV roadmap kicks In. Branded "Towards Carbon Neutral", this all-encompassing environmental strategy has as its ultimate goal, to get to zero emissions by 2050, but with a number of intermediate milestones in-between. And here we're not just talking emissions produced by a vehicle, Toyota plans to be emission-free throughout the production process (not just for Toyota but our suppliers as well). To this end Toyota South Africa has an initial plan to roll out Hybrid variants on most of Its mainstream model ranges. The big news will be the introduction of the locally-produced Corolla Cross (in petrol and Hybrid) as from November this year. This, however, is just the start of the electrification programme - the full spectrum of NEVs will be launched when there Is sufficient demand and when the infrastructure can support their Introduction (watch this space).

With this change in customer behaviour, we are excited to introduce Hybrid variants of two of our most popular passenger cars - Corolla and RAV4. Both Corolla and RAV4 Hybrid are a first for South Africa, and combine all the virtues of their conventional namesakes with the added performance and fuel efficiency of Toyota's proven Hybrid system.

As efficiency is the aim of the game, the petrol engine utilises many friction-reducing technologies under the skin, such as lightweight and coated connecting rods, low-friction timing chain and conical valve springs. Special attention has also been paid to heat recovery using an improved Exhaust Gas Recirculation (EGR) system.

It is boosted by the latest-generation electric motor and battery pairing - which deliver a more compact package that is lighter in weight and lower in cost, and reflects significant advances in battery, electric motor and petrol engine technologies. The hybrid battery has a higher energy density, which means that even though its size was reduced by 10 per cent, its power output remained the same. It can absorb 28 per cent more energy in the same amount of time, for more rapid self-charging.

The electric motors themselves are smaller, but also have an improved power-to-weight ratio. The electric motor provides a supplementary 53kW and 163Nm (at full capacity) - to boost overall system output to 90 kW (the combined figure is not an aggregate of the two power sources, due to transmission reduction losses).

The Hybrid powertrain also employs a Continuously Variable Transmission (CVT) gearbox - which seamlessly integrates the two drive sources, feeding power to the front wheels. Toyota's latest generation hybrid models utilise a 'starting reduction gear' to improve acceleration from standstill and provide a more direct-drive feeling when taking off. Drivers thus get the comfort and convenience of a 'two-pedal' arrangement while not sacrificing on driveability, performance or fuel economy.

One Grade, One Spec

The Corolla Hybrid is offered in the valued-minded Xs spec level. This mid-tier grade combines all the key comfort and convenience features while keeping with the Hybrid's more pragmatic bias.

The Corolla Hybrid offers buyers outstanding fuel efficiency, with an impressively low average fuel consumption figure of 3.5 l/100 km. CO2 emissions are equally low, registering 81 g/km. Combined with a 43-litre fuel tank, the Corolla Hybrid has a theoretical range of over 1200 km on a single tank.

The pricing has been set at a very competitive level in anticipation of future government support on New Energy Vehicles (NEV). Toyota South Africa Motors' strategy is to make Hybrid models attainable and offer customers an attractive product package - leveraging the benefits of Hybrid technology - without paying significant premiums in order to experience it.

A six-services or 90 000 km service plan is standard with service Intervals pegged at 15 000 km / 12- months. Toyota's standard 3-year/100 000 km warranty is included and customers have the additional peace of mind of an 8-year / 195 000 km Hybrid battery warranty. Service and warranty plan extensions can also be purchased at their nearest Toyota dealer (220 outlets).