HAVAL H6, a Hot Seller for 10 Years, Leading More Than One Generation 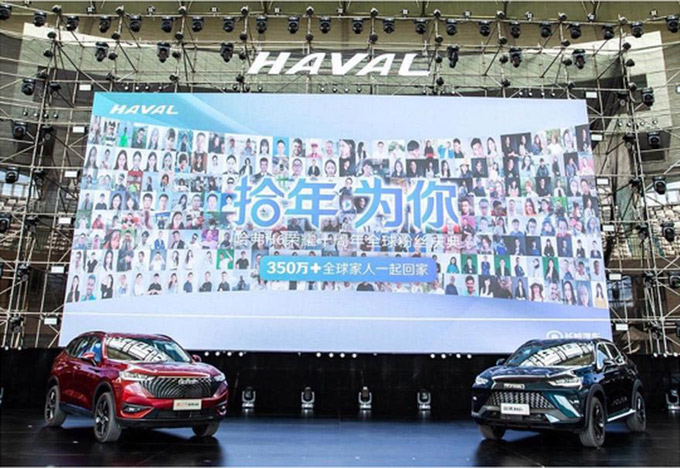 On August 27, the ceremony of the 10th anniversary of GWM’s HAVAL H6 for global enthusiasts was held at Chengdu Open Air Music Park, China. On the ceremony, apart from a review on the progress and achievements of HAVAL H6 over the past ten years, the two new-generation vehicles, HAVAL H6 Supreme+ and HAVAL H6S were also unveiled.

Since the birth of HAVAL H6, the first "intelligent urban SUV" of the HAVAL brand, in 2011, its products have been iterated and optimized for three generations in ten years. After rigorous market tests, HAVAL H6 is leading the global SUV trend. HAVAL H6 has brought historic changes to the Chinese market. It has been the best-selling SUV in China for many years and the "National Legendary Vehicle" in the eyes of Chinese users. Through upgrades, it has also set off a craze in the international market, becoming the trusted option of 3.5 million car owners worldwide and ranking among the top five SUV models in global sales in 2017. Its global sales amounted to 3.5 million units in 10 years.

After years of glorious deposits, the 3rd Gen HAVAL H6 has been fully optimized based on the previous two generations, with inherent self-assured charisma. In exterior design, a new Eastern futuristic aesthetic concept that perfectly integrates Eastern philosophy and future technology is used to reflect the beauty of harmony between the senses of youth and high class, and satisfy all the fantasies of global users for taste and technology. Additionally, empowered by the L.E.M.O.N. platform, the 3rd Gen HAVAL H6 has been updated in both intelligence and performance. Intelligent technologies make it a partner who can think, communicate and evolve. Intelligent full-color HUD, which used to only appear in the top models of luxury cars, allows users to know real-time vehicle and road conditions while driving with their eyes looking straight ahead. Full-scene automatic parking enables automatic parking in all directions, putting an end to manual control. The 3rd Gen HAVAL H6 is granted stronger performance by using the fully updated 2.0GDIT engine, 2nd Gen 7DCT transmission and chassis system of better controllability and stability. Based on a lightweight body, the power becomes stronger and the fuel efficiency is increased by up to 14.5%, giving an ultimate driving experience.

Ten years ago, HAVAL H6 came on the scene and filled the gap in the Chinese SUV market. Now, the 3rd Gen HAVAL H6 is leading the industry technologies again. It will open a new chapter and continue its reputation as an "International Legendary Vehicle".