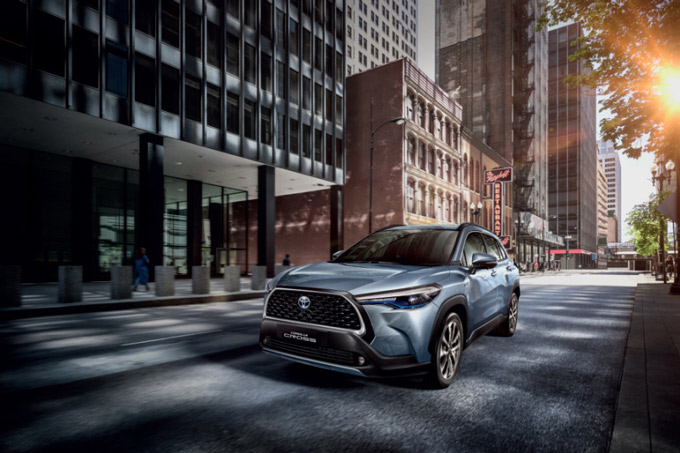 Following the previous release where we introduced the Corolla Cross - the first SUV adaptation of a Corolla model - we are pleased to share the engine and drivetrain configurations of the newcomer. The current buzzword in the automotive landscape is undoubtedly 'New Energy Vehicles' aka NEV.

As the Corolla Cross is poised to take Corolla into the 'new age', it is paramount that this model embraces the New Energy philosophy. In recognition of this, we are proud to announce the inclusion of both conventional petrol and Hybrid Petrol-Electric powertrains in the Corolla Cross. This will also signal Toyota's first Hybrid powertrain production on local turf.

Outputs are pegged at 103kW at 6000 rpm and 173Nm at 4400 rpm, while being mated to a 7-step CVT transmission. The CVT provides enhanced efficiency by automatically selecting the ideal "gear ratio" for the operating conditions and providing smooth acceleration. The transmission logic also provides a manual mode with seven pre-programmed gear ratios - allowing drivers some manual control when demanded.

The efficiency of the powertrain is evidenced by a frugal 6.8 litres per 100 kilometre fuel Index, with CO2 emissions checking in at 154 g/km.

The Hybrid model employs the familiar 2ZR-FXE engine also found in the Toyota Prius (alongside the C-HR Hybrid and Corolla Hybrid). Prius introduced the next generation of Toyota’s signature self-charging hybrid powertrain - the first in a new family of powertrains that builds on the two pillars that have made Toyota hybrids popular with drivers across the globe: their fuel efficiency and the relaxed and carefree drive they provide.

Toyota focused its efforts on making its next generation of hybrids even easier and more intuitive to drive. The system has been set up so that it gives a natural, immediate, but smooth response to any accelerator pedal input. Refined and confident, it delivers just the right level of performance.

Using Atkinson cycle technology, the re-engineered 1.8-litre engine delivers 72kW and 142Nm in pure ICE (Internal Combustion Engine) mode and boasts a world-beating thermal efficiency figure of 40% (for a petrol engine). The gas flow, combustion, cooling and knock control were all improved and much more effective use has been made of exhaust gas recirculation. Toyota has developed a heat recovery system that uses spent exhaust gas to speed up the warming of engine coolant. This means fuel can be saved because the hybrid system is able to stop the engine earlier and more often when it isn’t needed to power the vehicle.

Other efficiency-boosting measures include the use of thin-section, resin-coated connecting rod bearings and a low-friction camshaft chain. Friction created by the piston skirts, rotating parts and oil pump has been reduced and a new electric water pump has also helped cut the level of losses. Conical “beehive”-type springs were adopted to reduce the valvetrain load. And, to ensure comprehensive improvement, the entire engine underwent CAE analysis to achieve the best rigidity and to reduce noise and vibration.

Advancements to the electric system includes a more compact package that is lighter in weight and lower in cost, and reflects significant advances in battery, electric motor and petrol engine technologies. The hybrid battery has a higher energy density, which means that even though its size was reduced by 10 per cent, its power output remained the same. It can absorb 28 per cent more energy in the same amount of time, for more rapid self-charging. The electric motors themselves are smaller, but also have an improved power-to-weight ratio. The electric motor provides a supplementary 53kW and 163Nm (at full capacity) - to boost overall system output to 90 kW (the combined figure is not an aggregate of the two power sources, due to transmission reduction losses).

The Integration of the petrol and electric powerplants give the Corolla Cross Hybrid an ultra-refined powertrain which offers superior power, torque and acceleration. All this while using less fuel, emitting less emissions and offering a quieter drive - therefore a real no-brainer. The electric motor provides a very noticeable, yet smooth boost in mid-range torque and overtaking acceleration, incorporating the benefits of forced induction without the associated thermal management requirements or mechanical complexity. In simple terms, the Corolla Cross Hybrid delivers a driving experience similar to that of a turbo or supercharged four-cylinder engine, while using new energy technology to achieve this.

A dedicated EV mode is also offered, where operation is restricted to near-silent, full-electric propulsion (battery state-of-charge dependant). The Hybrid configuration really shines in low-speed usage situations such as peak-hour traffic, where the petrol engine is automatically shut off and the vehicle can be driven on electric power only - thereby using very little fuel. Electric operation is also utilised when reversing or when coasting on a level road. The Corolla Cross is classified as a full hybrid vehicle, as it automatically recharges the battery pack either via regenerative braking or by the petrol engine - making it a fully closed-loop system without the need to 'plug it in'.

The Hybrid powertrain also employs a Continuously Variable Transmission (CVT) gearbox - which seamlessly integrates the two drive sources, feeding power to the front wheels. The CVT design eliminates many rotating components, resulting in a more compact and more efficient transmission - offering the benefits of an automatic transmission without the performance trade-offs associated with a conventional automatic when paired to a smaller capacity engine. Toyota's latest generation hybrid models utilise a 'starting reduction gear' to improve acceleration from standstill and provide a more direct-drive feeling when taking off. Drivers thus get the comfort and convenience of a 'two-pedal' arrangement while not sacrificing on driveability, performance or fuel economy.

The month of August also marked the production of the very first Corolla Cross in our Prospecton Plant -  a fitting, bright red example. This is the first hybrid powertrain to be manufactured by Toyota in South Africa and a product of significant infrastructure investment and skills training - to allow Toyota South Africa Motors (and its employees) to compete on a global scale.