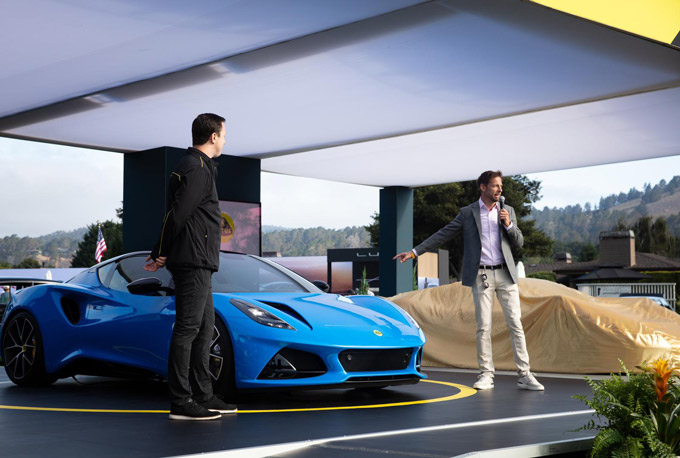 As the sun sets on the 2021 Monterey Car Week, Lotus Cars reports a week of debuts, track action, commercial success and another wonderful time spent with friends old and new in California.

Commenting on the week’s festivities, Lotus Cars USA’s Jim Carter said: “Monterey Car Week never fails to deliver.  2021 marked Lotus’ return after the Evija hypercar debut here in 2019, and with the three debuts at the Quail on Friday, we topped off the week in grand style.  The reception to the returning Evija, in a new F1 inspired guise was rapturous.  Emira’s US debut was met with great excitement and considerable demand for our first new sportscar for over a decade.  While the Radford Type 62-2 was an absolutely stunning addition to the week.”

Joining the Lotus and Radford team on the stand at The Quail was Martin Waide, the man who designed the original Type 62 in 1969 for Team Lotus. Martin has met with the Radford team throughout the design of their car and most recently gave his final approval of the new 62-2.

Radford co-owner and former Formula 1 world champion Jenson Button added: “Monterey Week was where any Lotus fan’s dreams came true this year.  What a line up!  Evija and Emira – both of which I’m adding to my collection – looked and performed outstandingly, and I had the privilege of putting Emira through its paces at Laguna Seca during the week – that was a real treat.  I am also so proud of the Radford team for bringing our 62-2 to life here this week – it’s a stunning piece of coach building and engineering and a beautiful and contemporary tribute to the 1960s original – as I said – any Lotus fan’s dream come true!”

Ant Anstead, TV’s ‘Master Mechanic’ and co-owner of Radford added: “What a week it has been!  It really is the stuff of fantasy to be at the heart of a festival like Monterey Car Week, among friends, with a car designed, engineered and built together with those friends.  It has been an extremely proud moment for us all to share the Radford 62-2 with the world, the interest and reception for the car has blown us away.  Thanks also to the Lotus team for their partnership and all the support here this week.”