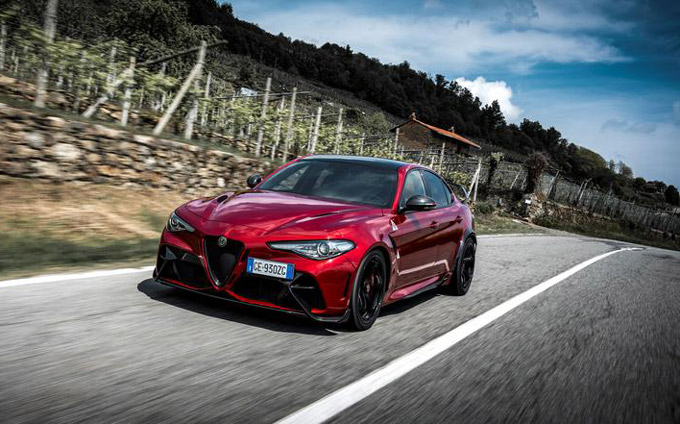 Performance car enthusiasts, get your cheque books out. The legendary – and extremely limited production – Alfa Romeo Giulia GTA and GTAm is headed to South African shores.

Just 500 numbered cars are being built by Alfa Romeo and South Africa’s proud Alfa Romeo legacy and competition association with the nameplate has secured a very limited allocation. The order book is officially open and fortunate owners will not only acquire a legendary performance car, but an equally tasty experience and package of accessories with it.

A set of initials with a legendary feel: GTA

The acronym GTA stands for “Gran Turismo Alleggerita” (alleggerita being the Italian term for “lightened”), and it originated in 1965 with the Giulia Sprint GTA, a very special model based on the Giulia Sprint GT, designed as a sports car and presented at the Amsterdam Motor Show staged that same year. The body of the Giulia Sprint GT was replaced with an identical version in aluminium, for a total weight of 745 kg compared to the 950 kg of the road version. A second, but significant variation concerned the 1570 cm3 twin cam engine which, in standard road configuration, with dual ignition, reached an impressive output of 115 hp (86 kW). The technicians at Autodelta, the official Alfa Romeo racing team, chose it as the reference vehicle for the Touring category and developed it to achieve a maximum output of 170 hp (127 kW). The model’s competition success was immediate: three consecutive European Touring Car Championships, tens of national championships and hundreds of individual races in every part of the world. It ramped up the image of the entire range: Giulia Sprint GTA expressed the claim “A victory a day in your everyday car” to perfection. From then on, the GTA name became naturally associated with Alfa Romeo’s sportiest models.

For the new Giulia GTA, Alfa Romeo engineers have striven to improve aerodynamics and handling, but, above all, to reduce weight: the same guidelines followed for the 1965 Giulia GTA.

The active aerodynamics were specifically studied to increase the downforce. These solutions contain technical know-how that comes directly from Formula 1, thanks to the synergy with Sauber Engineering and the use of the Sauber Aerokit. The same task is assigned to the side skirts, the specific rear spoiler and the active front splitter.

The titanium Akrapovič central exhaust system integrated in the carbon fibre rear diffuser is also new, as are the 20-inch centre lock wheels, appearing for the first time on a sedan. The handling at high speeds has been improved by widening the front and rear wheel tracks by 50mm and developing a new set of springs, shock absorbers and bushings for the suspension systems.

On GTAm, the aerodynamic front piece has been optimised to an extreme level, by adding a larger front splitter and a real carbon rear wing, which ensure a perfectly balanced load at high speeds.

In terms of performance, the powerful 2.9 V6 Bi-Turbo, made entirely of aluminium and capable of unleashing no less than 375kW in standard trim, reaches a power output of 390kW on Giulia GTA thanks to meticulous calibration work performed by Alfa Romeo engineers. The same team has also succeeded in optimising the implementation of the new Akrapovič specific exhaust system, with its unmistakable sound.

Moving inside the car, several new details stand out: the trim in 100% Alcantara® on the dashboard, door panels, glove compartment, side pillars and the central trim on the seats. Alcantara® is used even more extensively on the GTAm version, where the rear bench has been removed, leaving room for a fully upholstered “basin”, hosting specific mouldings deigned to hold helmets and a fire extinguisher. The new matte carbon inserts endow the interior with a distinctive technical and aesthetic elegance. In the new GTAm, the interior is unique in that it features a roll bar, no door panels or rear seats and the door is opened with a belt in place of the handle, another touch that comes from the racing world.

But power on its own is not enough to ensure extraordinary performance. The work done to reduce vehicle weight has been meticulous, and it has reaped particularly impressive results in the GTA. Here the total weight reduction amounts to 100kg, thanks to the adoption of lightweight materials such as carbon fibre for the drive shaft, hood, roof, front bumper, front wheel arches, rear wheel arch inserts and the shell of the specific sporting seats with 6-point Sabelt safety belts.

Further, lightweight aluminium is used in the engine, doors and suspension systems, and various other composite materials are used throughout. For instance, Lexan – a unique polycarbonate resin that comes straight from the world of motorsports – has been used in the side and rear window frames, further contributing to the weight reduction.

The result is a weight set around 1,580 kg which, combined with the increase in power to 390kW brings the power/weight ratio to an excellent 246kW/ton or 4.1kg/kW, making Giulia GTA capable of delivering extraordinary performance. Its acceleration from 0 to 100 km/h stops the chronometer at just 3.6 seconds thanks to the Launch Control system.

The Giulia GTAm is the two-seater configuration approved for on-road use, with front splitter and larger visible rear wing in carbon, the ultimate expression of sportiness. In the GTA version, with the same power, Giulia offers four seats, no rear roll-bar; spoiler and splitter optimised for daily use on the road; the same door panels, seats and windows as those of the Giulia Quadrifoglio. The result is a veritable supercar for everyday use.

A privilege for a limited number of lucky South African customers...

Alfa Romeo Giulia GTA and its extreme version, Giulia GTAm, will be built in a limited edition of only 500 units in total, all numbered and certified and ready to take up their place alongside their 1965 forerunner as one of the most sought-after collector’s items. They are not only magnificent to look at, but they are also ready to unleash impressive power on the road, usable thanks to a series of sophisticated technical solutions.

The same exclusivity found in Giulia GTA and Giulia GTAm will also characterise a particularly exclusive dedicated customer experience, designed to treat the lucky South African owners to a unique interaction that is 100% Alfa Romeo. The sales process will be one-to-one, with a Brand ambassador product specialist following each customer from order to delivery. But the buying experience doesn’t stop at the dedicated sales process. Indeed, the new owners will also receive a personalized experience package kit, which includes a Bell helmet in special GTA livery, a full racing set by Alpinestars (race suit, gloves and shoes) and a personalized Goodwool car cover for protecting his or her GTA or GTAm.

Alfa Romeo’s legendary racing heritage in South Africa is well-known. It was largely spearheaded by the original GTA, the first car imported by the Thompson Brothers in 1965 to be driven by Keith Berrington-Smith.

The right-hand drive 1600 GTA (one of 50 of the first 500 cars) was successfully campaigned and quickly developed. It was soon taken over by Basil van Rooyen’s Superformance and developed further into one of the most iconic touring cars of South Africa’s motorsport of the late 1960s. Carrying racing number Y152 (usually) and driven by Arnold Chatz it was one protagonist of the classic Alfa versus Ford battle with Peter Gough’s Meisner Escort, Y151.

Further modified, including 2.0-litre GTAm engine and wide body, it was ultimately left in Angola after its last competitive race.

A further 1300 GTA was imported in 1968 by Alderton Motors, then Johannesburg Alfa Romeo agent and campaigned in the ’68 and ’69 Springbok Series and some production car races shared with other legendary drivers, including Paddy Driver and John Conchie.

Lesser known in GTA circles was a South African developed and marketed model of the Alfasud. The 1983 Alfasud Export GTA featured Alfa’s 1.5-litre flat four engine with 77kW in the five-door hatch.

The GTA nameplate would return again to South Africa in the early 2000s when a 156 was locally developed for Production Car racing. It was joined by a full factory onslaught of three genuine Autodelta/N-Technology prepared 147GTA Production Cars, giving BMW a serious run for their money, variously in the hands of Martin Steyn, Reghardt Roets, Morne Jurgens, Marco da Cunha, and Marc Auby.

Alfa Romeo offered the 156 GTA and 147 GTA on showroom floors, both powered by a 184kW 3.2-litre V6 engine with six-speed manual gearboxes.