SUV’s and Crossover’s: Vehicle of choice for women over the last decade

Over the last decade, more women have opted to purchase larger vehicles such as SUV’s and the sturdier Crossover, as opposed to smaller hatchbacks and sedans.

Pieter Wessels, Managing Director of Lightstone Auto says, “The ever-increasing spending power of women is driving their purchasing decisions, along with the option of safety and convenience. Buying preference has shifted from the small hatchback and sedan towards the bigger vehicles.” 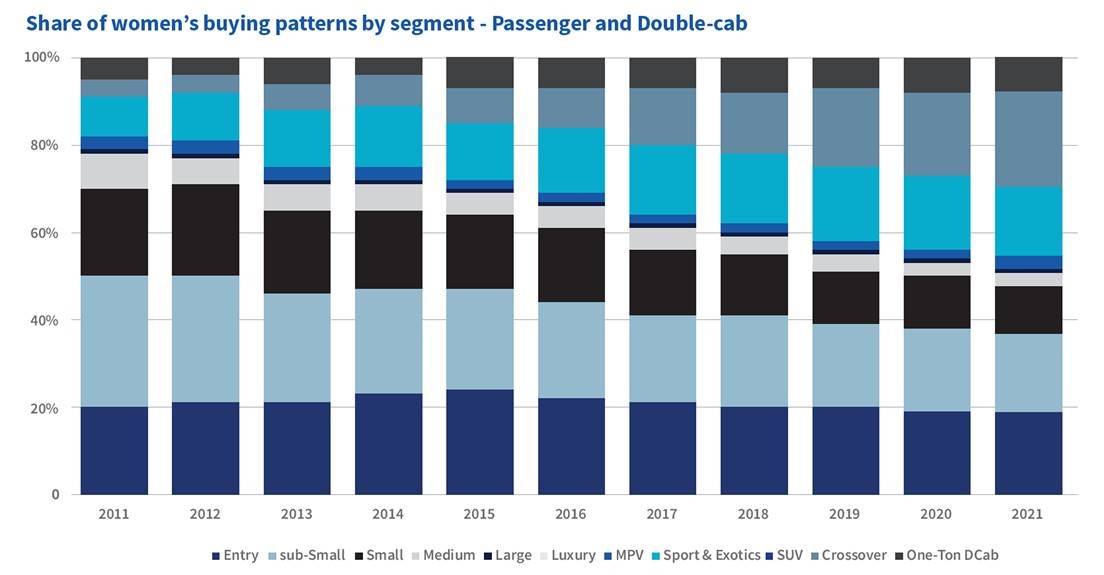 In 2011, considering the passenger and One-ton Double-cab pickup vehicle markets, women buyers were most active in the sub-Small segment (Ford Fiesta / Hyundai i20 / VW Polo), making up around 30% of sales. This was followed by the Entry level and (Toyota Etios/VW Polo Vivo) and the Small segments (BMW 1 Series / VW Golf) each making up around 20% of sales. The Medium segment (Audi A4 / BMW 3 Series) made up 8% of the sales and the combined hatch / sedan share of sales attributed to women in 2011 was 80%.

By contrast the combined portion of sales for the SUV (Hyundai iX35 / Toyota Fortuner), Crossover (Ford EcoSport / Mazda CX-3 / Nissan Qashqai) and Double-cab segments (Ford Ranger / Isuzu KB) was at 17%, with over half of the numbers going to SUVs.

Wessels adds, “In the first half of 2021, we saw that the most popular segment among women buyers is now the Crossover segment, with a 22% share of the market, followed by the Entry level at (19%), sub-Small (18%) and SUV segments (16%), making it evident that there is a growing shift towards larger vehicles.” 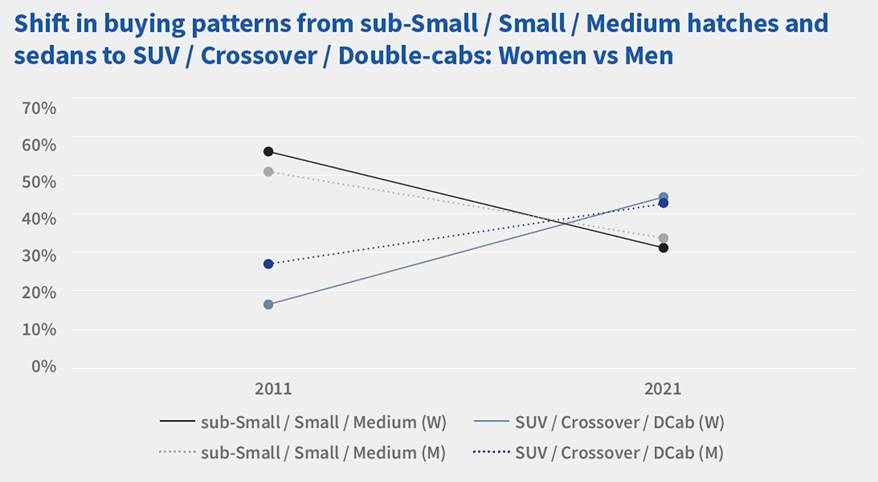 A combination of the sub-Small, Small and Medium segments, which previously made up 58% of sales to women in 2011, now only makes up 32% of purchases by women.

Conversely, the share for the SUV / Crossover / Double-cab axis has climbed from 17% to 45%, more than doubling the market share. “It could be argued these patterns are simply tracking market trends, but if we compare the shift in women’s buying patterns to that of men there is clearly a more significant shift in the buying behaviour of women,” says Wessels.

Commenting on data collected on Signio (Lightstone Auto’s flagship online platform), Wessels says, “We have seen a slow but steady increase in the percentage of vehicles bought by women, who accounted for just under 36% of new and used vehicle purchases, up from a low of 32% in 2015.”

Signio data for the last three years (August 2018 to July 2021), shows that women are more likely to use balloon payments which are used mostly on new vehicles. (Balloon payments allow a buyer to take an amount owing on the purchase price of a car and set it aside, resulting in the monthly instalment being calculated on a lower value.)

Wessels concludes, “If the prime lending rate remains as it is over the next six months, there will potentially be a steady increase in sales figures for larger vehicles.”