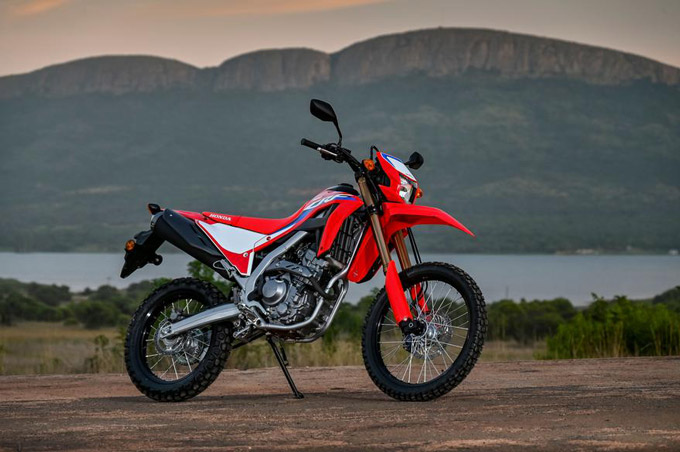 The essence of what makes a true dual-purpose motorcycle has long been in Honda’s DNA. In the late 1970s the XL250S was launched - a bike providing genuine on-road usability with excellent off-road performance. The entire XL range that followed became legendary, and proved that combining an economical and easy-to-use single-cylinder four-stroke engine with a competent chassis created a motorcycle that was useful, versatile and, as riders the world over found, a great deal of fun.

Over a decade ago, exhaustive discussions within Honda R&D took place about the creation of a brand-new dual-purpose machine. The company’s long history – in off-road competition and trail-ready machinery – was a useful touchstone when development of the bike first began.

Looking to the needs of customers came first. While some riders insist upon competition-level off-road performance, many others value ease of use, practicality and convenience. For weekday, urban environments they wanted a tough, practical bike with cutting-edge off-road style. But, come the weekend, it needed to provide a ticket to ride, wherever they wanted to go, on or off-road.

Honda’s new dual-purpose bike was always viewed by its development team with global perspective. It not only needed a powerful and frugal engine, its chassis also had to have a broad and capable range. And it needed to be affordable, offering high quality and outstanding value for money, with low overall running costs a priority.

The CRF250L, launched across Europe in 2012, was just that motorcycle.

And Honda’s engineers got the formula right. The CRF250L has proved a fruitful base platform which, as well as spawning a RALLY version*, enjoys consistent sales success around the world.

Time marches on, however, and now the new CRF300L takes the stage for 2021 – lighter, more powerful and with an array of detail improvements. It is every bit the do-it-all, dual-purpose motorcycle the CRF250L was. Just more so.

Now 286cc, the CRF300L’s new engine produces 10% more peak power of 20.1kW @ 8,500rpm, and 18% more peak torque at 26.6Nm @ 6,500rpm. Inlet cam timing has been revised, alongside both air intake and exhaust system for much stronger mid-range torque and power. Gear ratios 1-5 are shorter, for improved response, while 6th is taller for more relaxed high-speed cruising. An assist/slipper clutch now manages the rear wheel under hard down changes and offers 20% less load at the lever.

A redesigned steel frame, aluminium swingarm and bottom yoke are major contributors to a 4kg overall weight loss and feature revised rigidity balance for feedback and feel. Steering geometry has been adjusted in detail to match, alongside longer travel front/rear suspension and increased ground clearance.

Sharp-edged bodywork features a slimmer tank and seat, and a new positive LCD instrument display. The riding position, too, has been altered to encourage the light steering manoeuvrability needed off-road and, just as usefully, around town.

To match the engine’s heavier punch and to smarten pick-up and acceleration, gear ratios 1-5 are shorter, while 6th gear is taller for more relaxed highway cruising. Addition of an assist/slipper clutch reduces lever load by 20% and manages rear wheel ‘hop’ on rapid downshifts – great for control, on or off-road. On the highway, top speed goes from 129km/h to 132km/h.

Revised timing of the intake cam specifically boosts low- to mid-range response – the rpm range most used around town or off-road – and works with redesigned air filter, exhaust downpipe (660g lighter than the previous design), muffler and ignition timing. An iridium spark plug, along with precise metering of fuel from the PGM-FI injection system, further enhances combustion efficiency and improves environmental credentials.

The cooling system uses a 12.7kW heat-release radiator, sited on the left of the bike, protected with a polypropylene grill baffled to improve airflow. A thin guide-ring cooling fan is used to maintain even temperatures at low speeds, either in congested traffic or tricky off-road situations.

A total of 4kg has been saved overall from the CRF300L’s chassis, with wet weight of 142kg. The steel semi-double cradle frame is completely new and contributes 2.15kg to the weight loss. Just as importantly, to promote handling feel and connection to front/rear traction, its flexibility balance has been tuned with 25% less lateral rigidity.

This has been achieved with decreased width (-30mm) for the main down tube and smaller, 25.4mm diameter lower down tubes (from 28.6mm) plus a 20mm decrease in width across the central bracing tube.

To match, the one-piece cast aluminium swingarm is not only 550g lighter, it features a 23% reduction in lateral rigidity. It’s also 15mm narrower just behind the pivot point and smooth, cross-sectional shaping is used to create uniform deflection. Extruded aluminium is used for the chain adjustment collar. The steel bottom yoke of the previous design has been changed for aluminium; this shaves 730g from an area high relative to the centre of gravity for faster steering response.

The 43mm Showa inverted fork gains 10mm of stroke to 260mm, with spring weight and damping settings revised for precise control over a wide range of terrain and speeds. Pro-Link rear suspension now features a 260mm axle stroke, from 240mm; the Showa shock absorber is a single tube design.

The front brake uses a single 256mm disc gripped by a two-piston caliper, the rear a 220mm disc and single-piston caliper; in common with the CRF competition machines the rear master cylinder is now a lightweight, integrated design. The discs feature a wave design – also taken directly from the CRF250R/CRF450R – with exceptional self-cleaning abilities in adverse conditions. 2-channel ABS is standard.

The 21-inch front wheel and 18-inch rear increase stability on rough terrain and allow the fitment of more off-road specific tyres if required. Application of a machined rear sprocket and M8 bolts (instead of M10) plus hollow rear axle saves 240g and 160g respectively.

Drawing yet more inspiration from the racing CRFs, the CRF300L wears a crisp set of new bodywork and graphics. The 7.8L fuel tank is 190g lighter and slimmer than before to aid movement forward, and matched by a narrower forward seat section. The rear number plate bracket is also much reduced, for a 300g saving, while the aggressively shaped front mudguard is also lighter.

To foster easy, light control, the riding position has been subtly altered: the handlebars are have been pulled back slightly, while the foot rests have been lowered and also moved back, to make gear changes in heavy off-road boots easier. Seat height is increased 5mm, to 880mm, for a naturally upright ‘rider triangle’. The side stand, too has been redesigned with a 10% larger area for its (new) folding footplate.

Tailor-made accessories for the CRF300L include 38L top box, rear carrier bracket and mounts and protective sump guard for the engine.

All specifications are provisional and subject to change without notice

Please note that the figures provided are results obtained by Honda under standardised testing conditions prescribed by WMTC. Tests are conducted on a rolling road using a standard version of the vehicle with only one rider and no additional optional equipment. Actual fuel consumption may vary depending on how you ride, how you maintain your vehicle, weather, road conditions, tire pressure, installation of accessories, cargo, rider and passenger weight, and other factors.