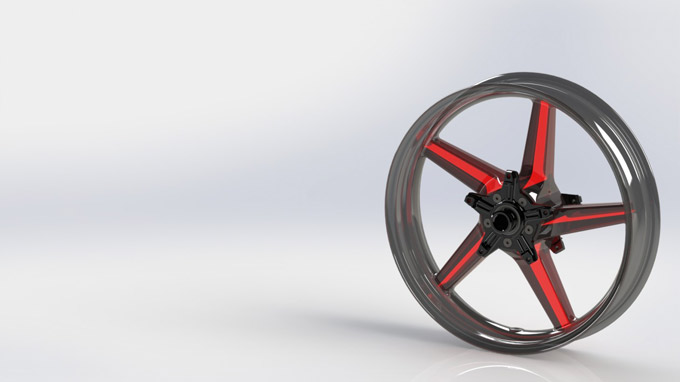 Motorcycle racers and track day enthusiasts can now add a new weapon to their armoury: the GP TEK wheelset, the lightest and most advanced motorcycle wheels in the world.

With a combined mass approaching 3.8 kg/nine pounds (depending on fitment) BST is confident the GP TEK will become the wheelset of choice for those who want the ultimate performance upgrade for a hardcore sports bike. Competition-ready, the GP TEK is available from Blackstone Tek (BST) Moto retailers around the world or www.BST-retail.com. The GP TEK is a thoroughbred competition wheel and meets or exceeds the specified strength tests as laid out by motorcycle sport controlling bodies, FIM and DORNA.

Tested at South Africa’s Red Star Raceway Mid-March, top superbike rider, Morné Geldenhuis, lapped almost two seconds faster than his previous best time during a Friday practice. He noted that it was entirely thanks to a set of these ultra-light race wheels - no other changes were made to the set-up.  After over 50 hard-ridden laps under the watchful eye of the entire BST engineering team, Geldenhuis spoke enthusiastically of the difference made by the carbon fibre wheels: “They made the bike feel unbelievably nimble – it was so easy to hold a line and I could also brake much later.”

He also enthused about how the physical effort required to ride hard was reduced, a major factor when racing powerful but relatively heavy road motorcycles. In fact, the GP TEK wheels were designed specifically with modern superbikes like his Yamaha R1 in mind, and the available wheel sizes reflect this.

Says Gary Turner, a former racer and the founder of BST: “The GP TEK is the culmination of what we have strived for since producing our very first full carbon fibre wheel 18 years ago; to make carbon fibre performance products that are as light and as strong as possible. With this wheel, riders can ‘weaponise’ machines which are already incredibly single-minded.”

It is a design where there is absolutely no room for compromise and despite the incredibly low weight, the GP TEK nevertheless boasts an unprecedented level of rigidity. To that end, BST uses a proprietary construction method where a series of internal structures create three-dimensional supports in key areas – the technique is a world first. Each wheel is hand-crafted, with up to 215 machine-cut pieces of carbon fibre, laid-up in a pre-determined sequence and at a specific orientation. It is a three-dimensional puzzle with each piece only fitting in one place...

BST’s German-sourced carbon fibre is strictly ISO controlled and - as has been the way from the beginning – “pre-preg” laminate is used exclusively. This gives BST more manufacturing control and consistency and ultimately the ability to produce a lighter wheel than rival brands. Not all carbon fibre is created equal either and BST uses the best grade of high-modulus fibres for its GP TEK wheels.

Once a carbon fibre wheel is autoclave-cured, the other hardware is added. The hubs are crafted from 6082 T6 alloy and finished off with T5 titanium fixing and fasteners.

“GP TEK is a high-performance product you can bolt on and enjoy the benefits of it immediately. They are completely track-focussed, and we guarantee that they’ll knock seconds off your lap times – as they did for Morne,” Turner concluded.