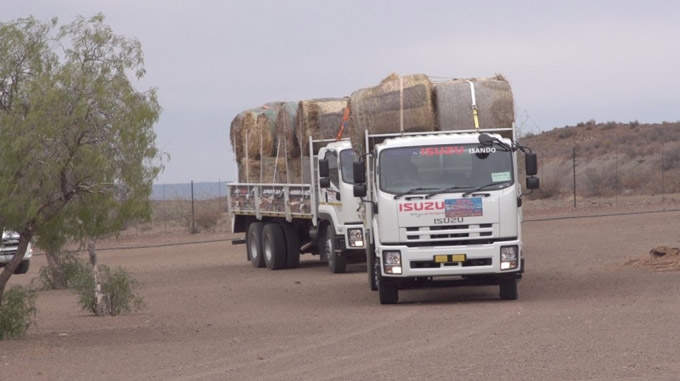 The drought in South Africa has threatened the livelihood of many farmers but Motus Isuzu in partnership with Isuzu South Africa and various farming assistance programmes are working together to ease this burden.

Motus Isuzu Franchise Managing Director, Le Roux Roux, is well acquainted with the plight of the agricultural sector and believes that if farmers cannot produce, the country will be in trouble.

“The farmers are in desperate need. They have no money for food or to even send their children to school. While Mpumalanga and the Free State received good rain and farmers expect a good harvest, several farmers in northern Limpopo had to slaughter their animals because of the drought. The situation in the Northern and Eastern Cape provinces is equally dire,” said Roux.

Isuzu SA donated three brand-new FVZ 1400 trucks to this initiative and Motus SA have provided the drivers and the fuel for all these trips. Since November, the trucks have been doing trips on an almost weekly basis, collecting feed in areas that have had good rainfall and transporting it across the country to the areas in need, often covering vast distances.

Organisations such as Farmers Assist and Voer ‘n Boer handle the donations of feed and identify the areas in need and Motus Isuzu ensure that these large loads are delivered where they are most needed.

To date the three trucks have collected and distributed feed in many areas across the country, including Merweville, Vanwyksvlei, Somerset East, Upington and Pofadder.

“The investment in this project is substantial but it is worth it when you see the look of relief on the farmers faces. The effect that these deliveries have on the farmers is enormous and often means respite for their staff and the entire community,” said Roux.

The feed delivery initiative involves staff at all of the Motus Isuzu dealerships. Staff members from the closest dealership are our contact with the farmer and are present during collection or delivery of feed.

“We are trying to survive the worst drought ever. There’s no more natural vegetation left on the farm, we are dependent on these fodder donations. The feed is expensive, and due to our remote location, the delivery costs are extremely high; these donations that we are receiving are worth gold,” said Charles Muller, who has been a farmer in Merweville for the past 46 years.

“I am proud to be part of this initiative, as we drive across the country cars flash their lights to show that they appreciate what we are doing to help the farmers and I think that we are setting a great example for the rest of South Africa, showing what can be achieved if we work together,” said David Xaba, truck driver from Motus Isuzu Isando.

Gishma Johnson, Isuzu SA Corporate Communications Manager said that one of the company’s corporate social responsibility objectives is to help communities in crisis. “Finding the right partners to get the job done is so important and demonstrated just how much can be accomplished when you work together. When Farmers Assist SA approached Isuzu for assistance earlier this year, we reached out to our dealer network to garner support and are very pleased that Motus Isuzu Isando stepped up to this.”

Motus Isuzu has four dealerships located in Isando, Vereeniging, Kimberley and Bloemfontein. These dealerships are located near the main arteries of South Africa, including the N1, N12 and N3 and allows Motus Isuzu to best service their customers travelling these routes.

“The Bloemfontein and Kimberley dealerships are well situated near the farming communities and service a large geographical area from their central location. Motus Isuzu are in the process of setting up a new dealership in the North of Pretoria, on Sefako Makgatho Drive, which will allow the group to better service their customers in this area as well as those travelling north on the N1,” said Roux.

“Motus Isuzu really sees this as a way of giving back to the farmers, apart from being great supporters of the Isuzu brand, the South African farming community are the back-bone of our country,” concluded Roux.

From a product perspective, the next few months are exciting times for Isuzu with the arrival of the new M-UX later this year, while the new D-Max bakkie, which will be built in Port Elizabeth, will go on sale early in 2022.