50 years of BMW M: The BMW Museum is marking this anniversary by presenting milestones and successes in a unique exhibition. 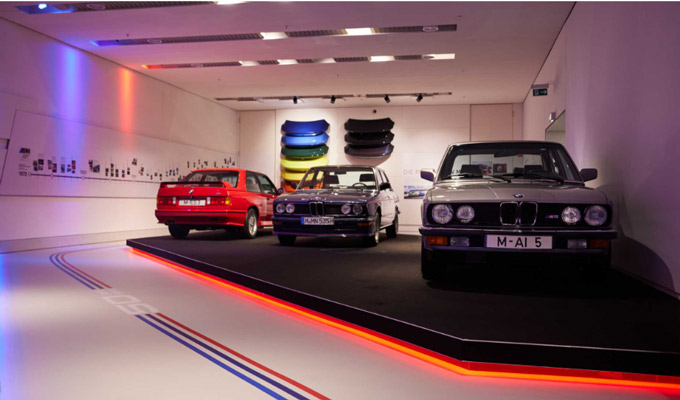 BMW M – the most powerful letter in the world – is celebrating its 50th birthday, and the BMW Museum in Munich is joining in the celebrations: the new BMW M exhibition opened on 24 May 2022, marking the very day that BMW Motorsport GmbH was founded on 24 May 1972. It is dedicated to the hugely successful BMW M brand, which emerged from BMW Motorsport GmbH.

Little could anyone have known how much of a unique success story BMW Motorsport GmbH would grow into when it was founded half a century ago – bundling and further professionalising all of BMW’s racing activities. The newly developed BMW 3.0 CSL won the 1973 European Touring Car Championship. Since then, BMW M has passed many unique milestones in the fields of motorsport, technology and design. This is embedded in the BMW Group’s corporate history in a lively and exciting new exhibition at the BMW Museum.

The race track as a museum circuit.

Visitors walk through large sections of the museum on a specially created BMW M circuit, modelled on a racetrack: “We have consciously integrated the eight BMW M stations into our permanent exhibition to highlight the BMW M anniversary everywhere,” says Helmut Käs, Head of BMW Group Classic, explaining the concept: “It is not your usual temporary exhibition. Instead, we are adding special highlights within the museum. For example, the ‘Visions’ room is actually all about future topics. We have set up a stage for the most successful racing touring car in the early days of BMW Motorsport – the BMW 3.0 CSL – flanked by the BMW 2002 turbo. That is also a symbol: both vehicles are an integral part of the tradition which is shaping our tomorrow.”

The motorsport gene is still at the heart of BMW M today.

The special exhibition flowing through a further seven rooms highlights various aspects such as the history of racing touring cars, the manufacture of the BMW Individual, the complete M Story with background information on the distinctive colours, the logo and the anniversary logo launched in 2022. Special aspects such as the BMW Art Cars and BMW driver training, which would not even exist without BMW M, are also showcased. The exhibits include the iconic BMW M1 and BMW M3 as well as design concepts, prototypes, BMW M classics and winning racing cars such as the BMW V12 LMR, all combining to give a sense of what the brand is all about: “This motorsport gene from the early days still thrives in BMW M today,” says Jochen Neerpasch, co-founder and first Managing Director of BMW Motorsport GmbH from 1972 to 1980: “The brand owes its dynamism, passion and performance to motorsport. Innovations such as lightweight construction, aerodynamics, optimised engine performance or a reinforced chassis still feature in M vehicles today.”

When you know a lot, you see more. The one-hour guided tour through the permanent exhibition, which currently has a special focus on the BMW M stations, fully lives up to this motto and gives a wealth of information. The BMW Junior Museum has come up with something special that will get even 9- to 14-year-olds thrilled about BMW M. Entitled “Join the M Team!” it offers exclusive, two-and-a-half-hour BMW M anniversary workshops. The young participants meet up-and-coming talents from the BMW Junior Team, experience genuine motorsport passion and team spirit, learn about historic victories and landmark vehicles. They complete small challenges and create their own airbrush BMW M designs, which can be exhibited in the museum and taken home.

The BMW M motorsport exhibition at the BMW Museum runs throughout 2022. All dates, further information – including about guided tours – and the online ticket shop are at https://www.bmw-welt.com/en/experience/guided_tours.html

The BMW Museum presents a fascinating look at the corporate, brand and product history of BMW. More than 120 of the brand’s most valuable and eye-catching cars, motorcycles and engines are on display in the 5,000 m² exhibition area. Information on exhibits and background information is given in German and English.

The BMW Museum, together with the BMW Plant and BMW Welt, impressively showcases the brand experience in Munich, providing deep insights into the tradition, the present and the future of the BMW brand. Founded in 1973 as one of the first brand museums, it was redesigned and expanded in 2008.

Tickets are available via the online ticket shop here