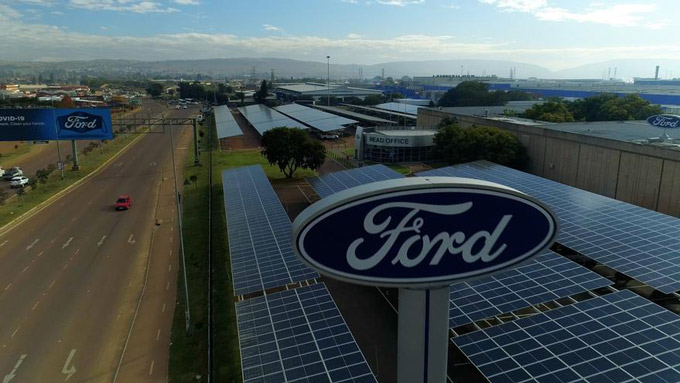 Ford’s Silverton Assembly Plant in Pretoria, which produces the Ranger pickup for domestic sales and exports to over 100 global markets, has flipped the switch and is now sourcing 35 percent of its electricity completely emissions-free, directly from the sun. This pioneering project is the result of a long-term power purchase agreement with SolarAfrica, with the installation of solar photovoltaic (PV) carports for 3 610 vehicles at the Silverton plant.

SolarAfrica’s innovative, large-scale solar array uses a total of 30 226 solar panels to generate 13.5MW of emissions-free electricity for the Silverton plant. This makes it one of the largest solar carports in the world, and a truly ground-breaking renewable energy project for the domestic automotive industry. It also supports Ford Motor Company’s ambitious global targets to use 100-percent carbon-free electricity across its manufacturing operations by 2035, and achieve carbon neutrality by 2050.

“We are delighted to officially flip the switch and begin receiving 35 percent of our electricity from the solar carports with the completion of the first phase of our Project Blue Oval renewable energy programme,” says Ockert Berry, VP Operations, Ford South Africa. “This project proudly puts the Silverton Assembly Plant on the map as part of Ford’s commitment to sustainability as we migrate our energy supply from fossil fuels to environmentally-friendly, renewable resources.”

“Through the long-term power purchase agreement with SolarAfrica, this project will also significantly reduce our energy costs, thus improving the efficiency and cost competitiveness of the plant,” Berry says. “It is another big step forward in modernising our manufacturing operations as we build up to the highly anticipated launch of the must-have product that is the next-generation Ranger later this year.

“Combined with our R15.8-billion investment in the Silverton Assembly Plant and supplier tooling in the Tshwane Automotive Special Economic Zone for the next-gen Ranger, we have a truly world-class facility capable of producing vehicles of the highest quality for our customers around the world.” Berry says. “Despite increasing our production capacity to 200 000 vehicles per year, the solar project delivers on our promise of reducing our impact on the environment and contributing to a cleaner, more sustainable future.”

The facts and figures of the project are truly impressive. Although some inevitable delays were experienced as a result of the COVID-19 lockdowns and the global shortage of certain components, the installation took 599 days and 35 000 man-hours to complete and supported 121 jobs amongst sub-contractors involved in the construction and installation. Approximately 59 tons of steel and 315 tons of aluminium were used for the locally manufactured solar carports.

More than 5 000 metres of medium and low-voltage cabling was used to connect the solar PV panels to 120 three-phase 100kW inverters and eight transformers, before being fed into the Silverton plant. The system is capable of producing 13.5MW of power – which is equivalent to powering almost 224 000 light bulbs, or 12 171 average households, for an entire year.

More significantly from an environmental perspective, the solar PV array will eliminate the equivalent of 20 072 tons of CO2 generated per annum, which is a major step towards achieving Ford’s carbon-free emissions targets by 2035.

“With the solar project now complete and fully operational, we are evaluating the next steps for Project Blue Oval as we strive to ultimately have the Silverton plant completely energy self-sufficient and 100-percent carbon neutral,” Berry adds.

David McDonald, CEO of SolarAfrica, commended Ford’s foresight in integrating renewable energy into its local operations. “We applaud Ford South Africa for being industry leaders and committing to a sustainability project of this stature,” McDonald says. “Being the first of its kind in South Africa to focus on the large-scale integration of renewables in the automotive sector, we are proud to see the financial and environmental benefits this landmark project addresses. We hope that this project encourages many more original equipment manufacturers and suppliers in the automotive sector to aggressively adopt renewables and become more sustainable operations.

“Aside from the environmental and cost benefits, the Ford solar project has had a big impact on job creation in the Tshwane area, which is fully supported by the City of Tshwane as it forms part of the city’s focus to grow the automotive industry as a key driver for employment,” McDonald says. “We are glad to be contributing to the sustainability of this sector and assist Ford SA in bringing its vision of job creation to life, hopefully leading to further industry growth and indirect employment.”

Video that highlights the installation of the innovative solar carports.