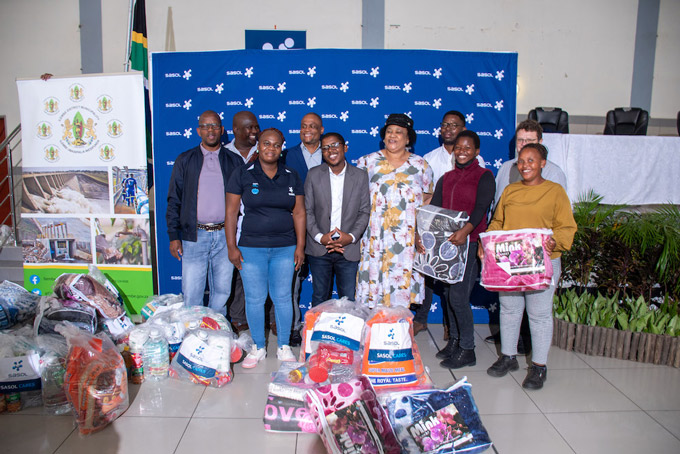 Sasol’s flood relief support in KwaZulu-Natal is shifting into higher gear this week with the company handing over more than 1000 food and hygiene parcels, blankets and mattresses to distraught families in Mandeni and KwaDukuza in the iLembe District Municipality.

On Thursday (05 May), the company handed out more than 600 food and hygiene parcels, blankets and mattresses to distressed families in Mandeni and KwaDukuza, formerly known as Stanger, to the Executive Mayor of the iLembe District Municipality who will be leading a delegation of representatives from the three Local Municipalities being Mandeni, KwaDukuza and Maphumulo at the Mandeni Disaster Centre. These will be distributed to families living in temporary shelters in the area. The handover will be followed by another on Friday (06 May) where more than 330 relief support packages, blankets and mattresses will be handed over in Maphumulo.

“We are trying our best to act swiftly and provide relief to those families most affected by the recent devastating floods,” said Charlotte Mokoena, Sasol Executive Vice President: Human Resources and Stakeholder Relations. “Stepping up for the greater good of our country and impacted communities is a responsibility we all share.  We hope Sasol’s efforts provide some respite and comfort to distressed families as they start to rebuild their lives.”

Since the announcement of the state of disaster in KwaZulu-Natal, Sasol has provided support to the value of R2,5 million to various communities across the province working together with the Charities Aid Foundation Southern Africa (CAFSA), the provincial government, and various municipalities.

This past week, the company’s flood relief support in KwaZulu-Natal shifted into higher gear with the handing over of more than a thousand food and hygiene parcels, blankets and mattresses to distressed families in Umlazi, Tongaat and now Mandeni. Through its Energy Business, Sasol also handed over more than 500 food hampers and toiletries to displaced employees in those regions as well as those in Queensburg, Pinetown, Pietermaritzburg and Phoenix. Sasol energy also distributed these relief packages to employees of Sasol’s retail sites in the region including Sasol Sunpark, Sasol Ridgepark, Sasol Belair, Sasol Booth Road West, Sasol Avoca and Sasol Stanger. In responding to the needs of communities in KwaZulu-Natal, Sasol once again partnered with Imperial Logistics to assist with the transportation of the relief packs.

Sasol has also set aside R5 million towards assisting with the rebuilding of key infrastructure such as schools and clinics. This will take place as part of Phase 2 of the company’s flood relief support in KwaZulu-Natal.