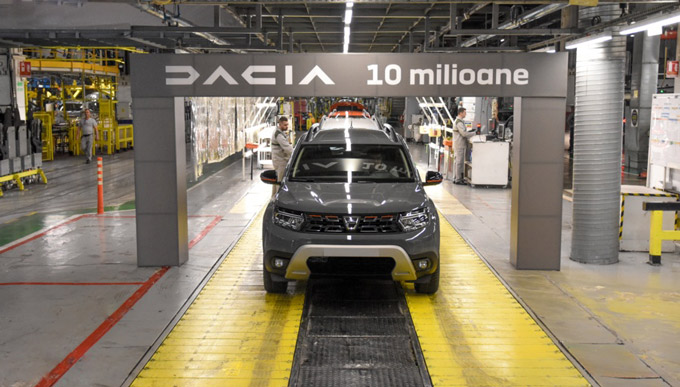 Wednesday, April 20, Mioveni plant (Romania), a Urban Gray Duster Extreme L.E. just off the assembly line, takes a commemorative and highly symbolic photo. It is indeed the 10 millionth Dacia vehicle produced since the birth of the brand.

We are very proud to have passed the symbolic milestone of 10 million vehicles produced. This result rewards a pragmatic vision of the automobile, focused on what is really essential for our customers.

Building on its experience, Dacia will continue to grow and to offer attractive vehicles that are adapted to our customers' lifestyles.

DACIA, A BRAND THAT CONTINUES TO GROW

The following year, the iconic Dacia 1300 model gave birth to a whole family of derivatives (sedan, station wagon, sports coupe, LCV). It remained in production for 35 years and has left its mark on the Romanian automotive landscape.

The takeover of the brand by Renault Group in 1999 opened a new chapter in the history of Dacia.

With the launch of Logan in 2004, Dacia became an international carmaker and the pace of sales accelerated. In 2005, Dacia opens a production line outside Romania, at the Somaca plant in Casablanca (Morocco).

The expansion of the model range (Sandero, Duster, etc.) and their immediate successes make it necessary to expand production capacity:

Dacia vehicles are currently sold in 44 countries, mainly in Europe and the Mediterranean basin.

To go further :
The Dacia Story