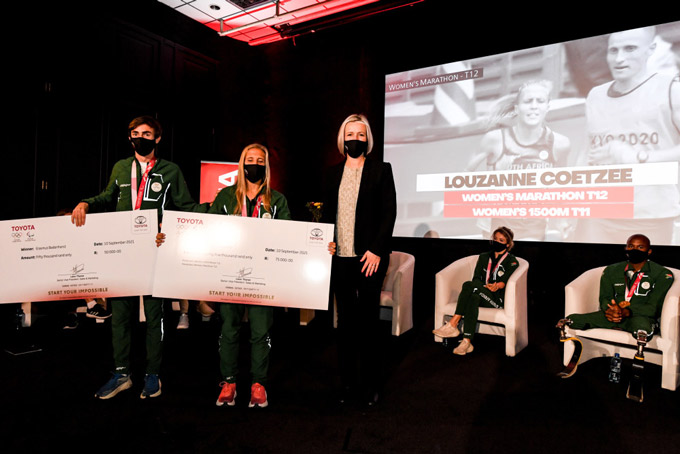 Toyota South Africa Motors (TSAM) has rewarded all the SA Olympic and Paralympic podium finishers from the Tokyo Games 2020 with cheques ranging from R25 000 to R200 000 per person. The cash incentives were awarded per medal, meaning that if an athlete won two gold medals, they would be eligible to receive double the amount of the medal’s cash value.

Athletes who won gold medals were awarded a R100 000 cash incentive, while those who bagged silver and bronze, received cash prizes of R50 000 and R25 000 respectively.

Coetzee’s guides Erasmus Badenhorst and Claus Kempen were also awarded R50 000 and R25 000, respectively, which is commensurate with her podium finishes in mixed class for the visually impaired. The prize giving event was also attended by President of SASAPD, Moekie Grobelaar.

Toyota believes that investing in athletes helps to ensure that sport is strategically positioned to play its part in the entertainment arena while also fostering social cohesion. According to Lettie Labuschagne, General Manager of Marketing Communications at TSAM: “Our involvement in sport is a multilayered one, and our partnerships are all-encompassing as can be evidenced in the TMC and IOC/IPC partnership, TSAM and SASAPD association as well as TSAM’s investment through individual ambassadorships.”

From a global perspective, it was in 2017 when parent company Toyota Motor Corporation (TMC) announced that Toyota would become the official worldwide mobility partner of the International Olympic Committee (IOC) and International Paralympic Committee (IPC) up to 2024. This period covers the Olympic and Paralympic Winter Games PyeongChang 2018 (Korea) and Beijing 2022 (China); Olympic Games Tokyo 2020 (Japan) as well as Paris 2024 (France).

As a partner, Toyota has committed to encourage the creation of a peaceful society without discrimination through sports as well as to promote a sustainable society through mobility. Toyota believes that mobility goes beyond cars; it is about overcoming challenges and making dreams come true, which is encapsulated in the company's “Start Your Impossible” corporate initiative. The initiative is the basis for Toyota’s transformation from a car company to a mobility company.

From a local perspective, TSAM and the South African Sports Association for the Physically Disabled (SASAPD) are well into the third year of their partnership to promote some of the sporting codes offered at Paralympic level for athletes with disabilities. The partnership has seen Toyota donate two Quantum minibuses to deserving SASAPD-affiliated schools thus far.

“Our involvement with SASAPD is so much more than just sponsorship of the games.  It is about leaving a lasting legacy and assisting to uplift the status of SASAPD. Our main objective is to help level the playing ground in sport and promote SASAPD to the status it deserves. We are both thrilled and humbled that one of our ambassadors Ntando Mahlangu had set the world ablaze with his performances at the recent games,” concluded Labuschagne.