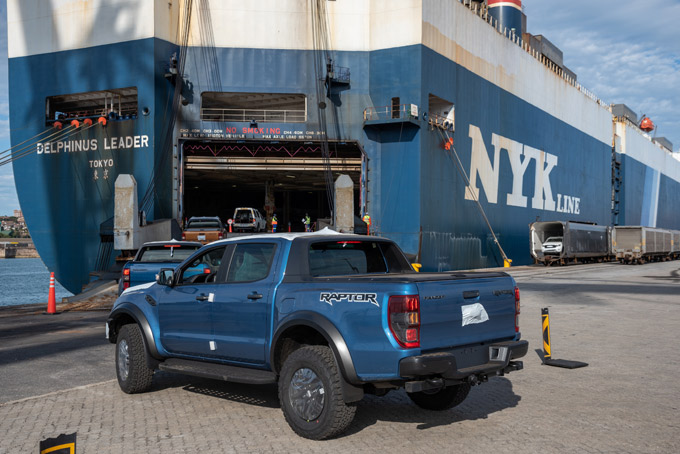 Ford South Africa is celebrating significant milestones this year for its local production of the Ranger pickup. At the beginning of September the Ford Silverton Assembly Plant in Pretoria produced its 500 000th Ranger for export, which is a fitting achievement since it is also the current model’s 10th anniversary this year.

Exports of locally assembled Ford Rangers initially commenced in 2000 for the previous-generation model, but it was the 2009 announcement of a R3.4-billion investment in Ford’s local operations that transformed the Silverton Assembly Plant to build the current and, at the time, most advanced Ranger yet. The export-driven investment programme also encompassed the Struandale Engine Plant in Gqeberha (formerly Port Elizabeth), which commenced production of the 3.2 and 2.2-litre Duratorq TDCi engines and components for domestic assembly, and for exports to other Ford plants around the world.

The then all-new Ranger was launched in South Africa in October 2011, and has gone on to become one of the country’s best-selling vehicles, the leading light commercial vehicle (LCV) export, and an important contributor to the success and growth of the domestic automotive industry and the economy as a whole. By virtue of its local vehicle operations, Ford South Africa currently employs around 4 300 people, and supports approximately 50 000 jobs in the total value chain. More jobs are on the cards resulting from the $1.05-billion investment announced in February 2021 for the next-generation Ranger.

“The launch of the new Ford Ranger in 2011 was a watershed moment for Ford South Africa, for the domestic market and the broader pickup segment internationally,” says Neale Hill, MD of Ford South Africa. “It immediately set entirely new benchmarks in the pickup sector for performance, technology, safety, comfort, refinement and capability.

“Having shifted the goalposts for the segment, the Ranger was a key driver in the rapid growth in popularity of double cab pickups as practical, lifestyle-oriented vehicles that are equally at home in the urban jungle as they are traversing the most challenging off-road terrain,” Hill says. “The Ranger double cab helped redefine the concept of a family vehicle, while the versatile Ranger SuperCab and trusty Single Cab models bolstered the line-up for leisure and workhorse applications.”

At launch in 2011, the installed capacity for local Ranger production was 110 000 vehicles per annum, but ongoing investment in Ford’s local operations ramped up production capacity to 168 000 units by 2018. A total of R11-billion was invested in Ford’s South African manufacturing plants over this period to facilitate the volume growth, as well as to introduce new technologies such as the impressive new 2.0-litre Bi-Turbo and Single Turbo engines assembled at the Struandale Engine Plant. These engines were launched in 2019 as part of a comprehensive Ranger upgrade which included the sophisticated new 10-speed automatic transmission.

It also enabled the launch of the first-ever Ford Ranger Raptor which didn’t just set new benchmarks, it created an entirely new segment for high-performance off-road pickups with its true Ford Performance DNA. The Ranger Raptor remains in a class of its own for capability and off-road performance, and its popularity continues to grow in South Africa and around the world.

“Achieving 500 000 exports for Ranger is a fantastic milestone for the South African team,” says Ockert Berry, VP Operations at Ford South Africa. “The investment and subsequent launch of the current Ranger in 2011 transformed our manufacturing operations, and put South Africa firmly on the map as a high-volume single platform manufacturer for Ranger, both for the domestic market and, crucially, for exports to more than 100 global markets, including Europe where Ranger is now the top-selling pickup.

“Although the milestone 500 000 exports extends from 2000 to 2021, the start of the new Ranger export programme in 2011 took our manufacturing operations to new heights,” Berry says. “We went from a total export volume of around 16 500 units of the previous Ranger between 2000 and 2011 to just shy of half a million units of the current model between 2011 and 2021. We are exceptionally proud of the legacy that has been built for Ford in South Africa, and our ongoing commitment to the country.”

Along with the 500 000th export in September 2021, the current Ford Ranger has notched several other notable achievements over the years. The Silverton Assembly Plant produced its half-millionth current-generation Ranger in August 2018, and the tally now stands at over 732 000 units three years later.

Another highlight was April 2021, when Ford achieved its highest-yet export Ranger volume, shipping 13 079 to export markets. Combined with the 2 416 Rangers sold in South Africa that month, Ford achieved an all-time record of 15 495 Rangers in a single month for domestic and global customers.

Ford’s legacy in South Africa dates back to 1923, with the establishment of the country’s first motor vehicle assembly plant in Port Elizabeth (now Gqeberha) in a converted wool store, which was capable of assembling 10 vehicles per day. The Silverton plant, which has now introduced a third shift, is able to produce up to 720 vehicles per day – which equates to one Ranger every two minutes, right around the clock.