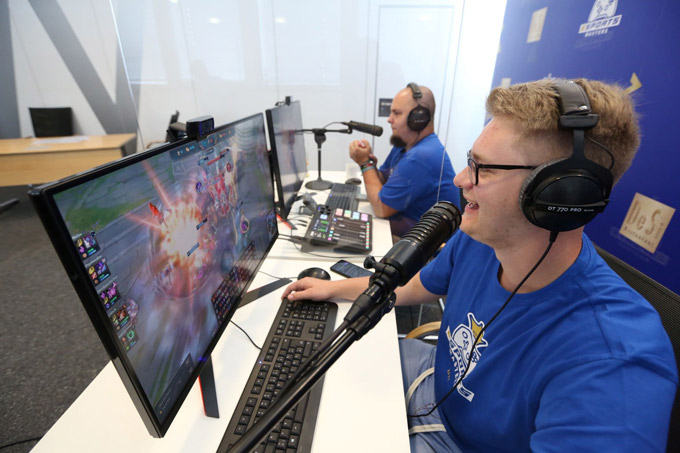 Ziehl-Abegg staged an international eSports tournament. Employees of the motor and fan manufacturer organized the two-day online event and at the company headquarters in Künzelsau provided a commentary on the action-packed showdown via live-stream. The favourites ultimately prevailed in the “Royal eSports Masters”. The event was a positive outcome for both the gamer community und organizers.

"Whack, there’s another goal". With technical finesse, Youngstar struck once again, extending his team's lead. “The three-member gamer team goes by the name of The Juicy Kids and lived up to its billing as favourites right from the start on the first day of competition at the international eSports tournament staged by Ziehl-Abegg. The well-coordinated trio of crack players Carca, Fabso and Youngstar were already on fire in the first game of the auto ball game "Rocket League", scoring time after time in the opponent's goal.

The technical superiority, the joy of playing and the hunger for goals of the favourites didn’t escape the attention of the commentators. Holger M. Rößler – IT trainer at Ziehl-Abegg – and his trainee Thibaut Abendschein formed the commentary duo on the first day of the "Royal eSports Masters". Both IT experts are passionate computer gamers in their spare time.

Rocket League to start off the event

Rocket League has been one of their favourite games for years. It was first launched by Psyonix in 2015 and enables cross-platform gaming between PC and game consoles and has already been installed millions of times on PCs worldwide. There are now several Rocket League leagues in which players who perform well are rewarded with a continual climb up the individual gamer rankings.

The principle of the game in Rocket League is simple: it's about putting the ball in the opponent's goal as often as possible using cars. But what makes Rocket League so exciting is that no team gets far by deploying ‘wall’ tactics and taking a defensive approach. The spectacle for live-stream spectators comes when players ‘cheat’ gravity in the futuristic high-tech arena and the cars take a shot at the opponent's goal from a height of several metres at mind-boggling speed.

While it’s oppressively hot outside on this August day, Holger M. Rößler and Thibaut Abendschein have made themselves comfortable in their commentary boxes in a pleasantly cool meeting room at Ziehl-Abegg’s corporate headquarters. On screens and with headphones behind a plexiglass pane, separated from the adjacent commentary booth, they give live-stream viewers a running commentary on what’s happening during the exciting matches. At the same time, Sina Hauber, another Ziehl-Abegg employee, follows the course of the conversation in the live chat. Fortunately, she hardly ever has to intervene as the chat participants all adhere to the netiquette rules.

When commenting on the fast-paced action on the playing field, Holger M. Rößler and Thibaut Abendschein don’t hold back on the use of English technical terms from the gamer community. They praise a successful "flip reset" as well as a successful "save" or the victorious "top left corner shot" which takes the winning team another round further in the "Double Elimination Bracket".

International teams at the ‘kick-off’

“Only Rocket League is played on the first day of the tournament. There are 16 international teams competing, comprising three players each. As an incentive there is prize money for the top three teams," explains Holger M. Rößler. Prize money of 300 euros awaits the tournament winner, the runners up will get 150 euros and the third-place team in the tournament, 75 euros".

The tournament tree is divided into a so-called "Double Elimination Tournament Bracket", i.e. with a "Winners Bracket" and a "Losers Bracket". "The teams high up in the rankings have been placed in the Winners Bracket. Any team losing twice will be eliminated from the tournament," adds Thibaut Abendschein. "But if you only lose once and then win all the games in the loser's round, you still have every chance of winning the tournament in the grand super final."

Ziehl-Abegg, a leading international fan and motor manufacturer with headquarters in Künzelsau, is breaking new ground by hosting the international eSports tournament. The fact that the "Ziehl-Abegg Royal eSports Masters" ran almost seamlessly without any major problems over the two days is thanks to the IT department which has some of its own leisure gamers.

The player and team administration, as well as the updating of the tournament tree using "Toornament" – a special software package for organizing eSports tournaments – and the provision of the technical facilities for a functioning connection to the live streaming service “Twitch”, was handled smoothly by the IT team. “It was more complicated in the lead up to the event, with the procurement of the hardware and, in particular, the requirement for compliance with the legal regulations on data privacy. We did experience a brief moment of stress when one of the teams dropped out shortly before the start of the tournament, forcing us to quickly find a replacement” emphasizes Holger M. Rößler.

On the first day of the two-day eSports tournament, the technology was securely in place, allowing commentators to focus on their essential work. From 3 p.m. to 10 p.m., the Rocket League match marathon continued until the favourites, "The Juicy Kids" were declared the overall winners. Before the grand final between "The Juicy Kids", headed by their star gamer "Youngstar" aka Kai Kruse and the "Freiwildgiraffen", Thibaut Abendschein and Holger M. Rößler were also pleased with the respectable achievements of the smaller teams. For example, Ziehl-Abegg’s own team "Most Valuable Azubi" put up a good show. The trainee Finn has a twinkle in his eye as he’s wildly celebrated in the live chat as the "Ronaldo of the Rocket League game" for scoring several goals against one of the favoured teams.

No less action-packed, but slightly more complex, after the first day of the eSports tournament the competition continues on the second and final match day with the fantasy game "League of Legends". There’s now a totally different line-up to the commentary team: Nils Maier, Timm Junker and Dennis Baumann. The three passionate recreational gamers also work in the IT department at Ziehl-Abegg.

For the commentators, the challenged is to provide a more detailed explanation of the principle of the game to non-gamers in just a few sentences. “Today, five players per team slip into different fantasy characters and then have to penetrate and storm the heart of the enemy camp. They can use weapons and take a big step forward to achieving their aim by gradually destroying the enemy turrets and towers on one lane, i.e. a predetermined path,” explains Dennis Baumann.

On the second day, the live commentary was dominated by English terms from the gamer community such as “Flash of Cooldown”, “Damage spell”, “Cloud Drake” or “Dragon pit”. For a bit of fun and a better understanding, the commentary team tries to translate some terms into German: for example: a “Wave Clear” turns into a rather cumbersome ‘Wellenräumungsgerät’. “For many gamer terms, there’s simply no German translation,” admits Nils Maier. Naturally, as an insider and die-hard League of Legends fan, he has no problems with gamer jargon.

Nevertheless, the commentators have to concentrate hard so they don’t lose track of what’s happening in the current game. In the game’s dark and gloomy mediaeval atmosphere there’s danger lurking around every corner for the eight teams of five players each. So every team can be happy about have attacking fantasy characters in their own ranks, like Jax. “Jax is the acknowledged Grand Master of Weapons, which is evident again today” says Timm Junker.

Even the experienced League of Legends player is impressed by how individual players like "Osymandias" from “The ELO Submarine” team help their team make significant progress on the second day of the tournament. The power and team spirit of “The Elo Submarine” are in any event enough to eventually get them third place: they’re rewarded for this achievement with prize money of 125 euros. In the final, the “German Jahrndorf Five” defeated its gamer colleagues of “German Jahrndorf Zero” in what was essentially a local derby and can look forward to a prize of 500 euros. The defeated finalists take home 250 euros.

The first "Royal eSports Masters" comes to an end around 10 p.m. on the second matchday. The international eSports tournament is a successful ‘first’ for Ziehl-Abegg. Peter Fenkl is also impressed with the eSports event. Ziehl-Abegg is not only making progress on the technological front but also playing a pioneering role in the services and benefits it offers employees," said the Ziehl-Abegg CEO.