Born in Mexico! The first unit of the BMW 2 Series Coupé is produced in San Luis Potosi. 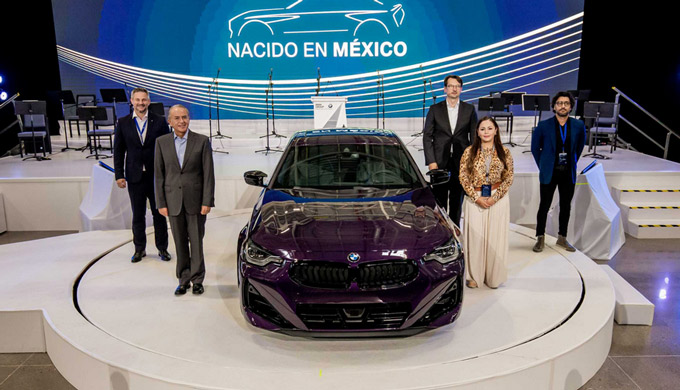 The BMW Group Plant in San Luis Potosi has started production of the new BMW 2 Series Coupé. The new high-powered sports compact is the brand's first launch fully executed and put into operation in Mexico.

The San Luis Potosi Plant is the newest within the company's global production network. From its design and construction, the Plant was designed to easily adapt to produce different models. In just two years since the Plant began production, it has enhanced operations to include the manufacture of Plug-In Hybrid Electric vehicles and to expand distribution to cover the globe. With an additional investment of $125 million dollars, the facilities were improved to incorporate this second vehicle into its production line.

Harald Gottsche, President and CEO of BMW Group Plant San Luis Potosi commented: “Two years after starting operations, our Plant integrates a new model to its production line. This has been possible thanks to the great talent of the team in San Luis Potosi. We are proud to be able to exclusively assemble this vehicle in Mexico for the worldwide market. With the new 2 Series Coupé we will show the enormous capacity existing in this country. I am convinced that this will be the first of many other successful launches”.

Milan Nedeljkovic, member of the Board of Management of BMW AG, responsible for production, said: “The BMW Group Plant in San Luis Potosi builds on the experience and best practices of the Global Production Network. As the latest addition to the network, it benefits from the latest innovative and highly efficient technologies, which have also contributed to it becoming one of the company's most sustainable production sites. Thanks to its flexible production system and its highly qualified team, we can take Premium vehicles from Mexico to the whole world”.

Born in Mexico for the global market

The new BMW 2 Series Coupé is a vehicle focused on dynamic excellence. Its athletic and sophisticated line was conceived by Jose Casas, a Mexican who is today a senior exterior designer for the BMW Group in Munich.

Once the design stage was completed, the BMW Group Development division in Germany jointly collaborated with Production Planning in San Luis Potosi to prepare the new model for the launch in Mexico.

The Purchasing division also played a fundamental role from the beginning of the project in the selection, development and industrialisation of local, regional, and global suppliers.

Direct investment and adaptations to the plant

Part of the additional investment was allocated to the expansion of the existing facilities and the acquisition of additional equipment necessary to assemble the new model. This included the installation of a total of 82 new robots in the Body Shop, while the existing robots required new programming to be able to handle parts with different geometries, and to weld, rivet and bolt them together to combine an intelligent mix of materials (steel, high-strength steel and aluminium) resulting in a light, yet highly rigid body that delivers the safety, driving dynamics and efficiency that the brand's customers expect.

Together with the Materials Analysis team, the Paint Shop was involved in the launch of two new specific colors for the BMW 2 Series Coupé; Brooklyn Grey and Thundernight Metallic. The latter is a new BMW Group color, exclusively for the Plant in San Luis Potosi.

Finally, a part of the investment was used to train personnel of the assembly area to work with a shorter body, with only two doors, which requires another approach to those already existing in the production line.

The company has announced that the commercialisation of this model is scheduled for later this year in North America and early 2022 in Europe and South Africa.